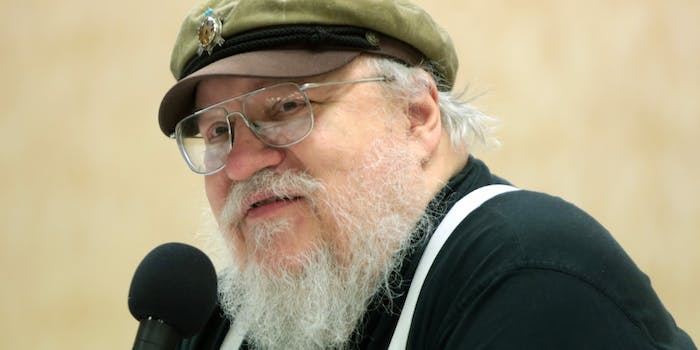 Nearly two weeks after news broke that HBO was working on four potential Game of Thrones spinoffs, George R.R. Martin gave fans an update on what is—and isn’t—happening with them.

Taking to LiveJournal, he confirmed that the spinoffs were in the early stages, although he’s not exactly a fan of the word.

“For what it’s worth, I don’t especially like the term ‘spinoff, and I don’t think it really applies to these new projects,” he wrote. “What we’re talking about are new stories set in the ‘secondary universe’ (to borrow Tolkien’s term) of Westeros and the world beyond, the world I created for A SONG OF ICE AND FIRE. It is a world, and a pretty big one, and if there were eight million stories in the naked city back in the 50s, just think how many more there are in an entire world, and one with thousands of years of recorded history.”

These potential “successor shows,” as Martin called them, will take place in the world that Game of Thrones brought to life, but they wouldn’t be sequels to Game of Thrones, so think prequel rather than sequel. With Martin’s hundreds of years of Westerosi history spread out through The World of Ice and Fire, The Lands of Ice and Fire, and the unpublished Fire and Blood (Martin’s version of The Silmarillion with the Targaryen family history), there’s plenty of territory to explore without looking beyond the current fight for the Iron Throne.

Martin been working with HBO on a successor show for months and even pitched concepts himself, only one which is being developed further. He’s still heavily involved with the process, having worked with all four of the writers working on concepts—not just two, as early reports indicated—and since the original news broke, Martin revealed that a fifth writer is working on a development. He notes that just because HBO has now greenlit five concepts, it doesn’t mean that all five shows will be made into pilots or even make it onto the air.

“No, I will not reveal the name here,” Martin said. “HBO announced the names of the first four, and will no doubt announce the fifth as well, once his deal has closed. He’s a really terrific addition, however, a great guy and a fine writer, and aside from me and maybe Elio and Linda [García and Antonsson respectively, who run the fansite Westeros.org], I don’t know anyone who knows and loves Westeros as well as he does.”

Martin also ruled out two commonly cited possibilities for successor shows so as to not let fans get their hopes up. None of the shows are about Robert’s Rebellion, mostly because he’s says he’s not interested in telling a story that will be fully revealed by the end of A Song of Ice and Fire. (He also confirmed that he’s still working on The Winds of Winter.)

The other one touches on a familiar problem for Martin, even though he did at one point endorse the idea. If a Dunk & Egg TV show happened, HBO would probably finish telling it before he did, just like it did with Game of Thrones.

“We’re not doing Dunk & Egg,” he said. “Eventually, sure, I’d love that, and so would many of you. But I’ve only written and published three novellas to date, and there are at least seven or eight or ten more I want to write. We all know how slow I am, and how fast a television show can move. I don’t want to repeat what happened with GAME OF THRONES itself, where the show gets ahead of the books. When the day comes that I’ve finished telling all my tales of Dunk & Egg, then we’ll do a tv show about them… but that day is still a long ways off.”

Martin won’t reveal any further details about the concepts or those shows, so now fans are left to do what they do best: speculate freely.

You can read Martin’s post in full on LiveJournal.