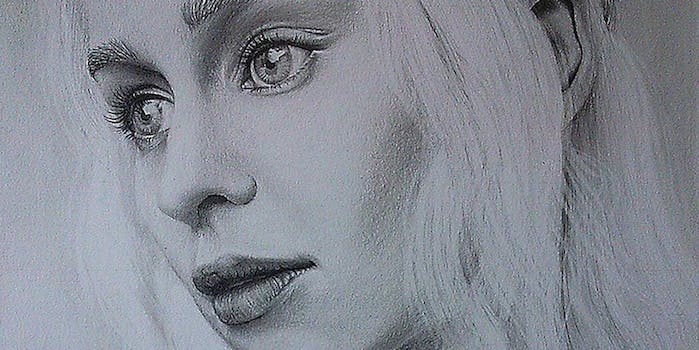 Game of Thrones is starting to influence baby names.

There are at least 12 countries on Earth where newly minted parents face legal limitations regarding what names they can bestow upon their offspring. And every so often, Americans will read news stories about foreign governments stepping in when parents violate local naming conventions. For example, in 2008, an unfortunate young New Zealander named “Talula Does The Hula From Hawaii” was put into court guardianship until she could be given a less-awful moniker.

The U.S. has no official baby-name rules, though sometimes a state will step in when a kid’s name is particularly egregious; a certain neo-Nazi dad, currently fighting New Jersey for custody of his children, first came to the authorities’ attention after giving his kids names like “Adolf Hitler Campbell” and “JoyceLynn Aryan Nation”.

So even if you’re a traditionalist where kids’ names are concerned, you must admit that dubbing a girl-child “Khaleesi” is infinitely better than naming her “Adolf Hitler,” “Talula Does The Hula From Hawaii” or “My Parents Are Way Cooler And More Creative Than Yours, As Evidenced By My Unusual First Name.”

The word “Khaleesi” first appeared in 1996, when fantasy author George R. R. Martin published the novel A Game of Thrones, first book in his as-yet-uncompleted multivolume series A Song of Ice and Fire. By 2011, HBO had bought the TV rights to Martin’s epic story, and the series Game of Thrones premiered that April.

And within a year and a half, by the end of 2012, there were over 100 American baby girls whose parents had put the name “Khaleesi” on their birth certificates.

Laura Wattenberg, writing for the Baby Name Wizard Blog, first called attention to this trend last month, when she posted about “Khaleesi: The Non-Name from a Non-Language.”

“Last year, 146 American girls were named Khaleesi. That’s a 450% jump in the name’s usage from 2011, and before that year it was completely unknown.

If you’re not familiar with the name Khaleesi, you’d be excused for guessing that it’s Arabic, like Khalilah, or perhaps from Western Africa, like Kwasi. In fact, the name comes from the Dothraki language. Except it’s not a name in that language, but a common word meaning “queen.” And Dothraki isn’t a natural language, but a handful of words created by Game of Thrones author George R. R. Martin for his imagined Dothraki people.”

Wattenberg goes on to point out that it’s not unusual for children to be named after fictional characters; English-speaking parents have lifted names from literary works since at least Shakespeare’s day. What bemused Wattenberg was that, by the rules of Martin’s fantasy world, “Khaleesi” is not a name but a title:

“Plenty of authors dating back to Shakespeare have invented names that caught on with parents [….]But a name taken from a word that’s not a name, from an imagined language? I can’t think of a precedent.”

However, when Rebecca Pahle wrote about the Khaleesi trend for The Mary Sue on Monday, this semantic distinction bothered her less than the implication that parents of Khaleesis were culled exclusively from TV viewers rather than book readers:

“Before [2011] the name “was completely unknown,” much to my lack of surprise.  (Though not a single book reader named their kid Khaleesi before the show started? No one? Bueller?) I can’t imagine the whole “but it’s not a naaaame” thing matters much to the parents who named their kid that. They probably just liked Game of Thrones and/or Daenerys and/or thought Khaleesi sounds cool. More power to you, procreating fellow nerds.”

Khaleesi isn’t the only word to jump out of Martin’s imagination into real-world baby-name registries. Last month Pahle noted the growing popularity of the name “Arya” and hoped “May all those baby Aryas have better lives than their Westerosi namesake.”

On Twitter, the baby-name traditionalists who disapprove of Khaleesi as a name vastly outnumber the pioneers who like it:

Did you know that 146 (unfortunate?) babies were named after Game of Thrones’ heroine Khaleesi? #GoT

At this moment, 146 children in the US are named Khaleesi. They should band together and form a weirdo khalasar.

I know my Khaleesi has to be somewhere among all this trailer trash.

But the name is not without its supporters, however lukewarm they might be:

‘Khaleesi’ Is Now a Trending Baby Name #WebProNews https://t.co/Iw3muipFyx Fine by me!

One piece of advice for readers who agree with this guy: If you must name your kid after a Game of Thrones character, at least choose a sympathetic one. (And, seriously: If you have a little boy, do NOT name him Joffrey.)

#Khaleesi is becoming a popular baby name for girls. I’d rather name my daughter Melisandre or Cersei #GameofThrones