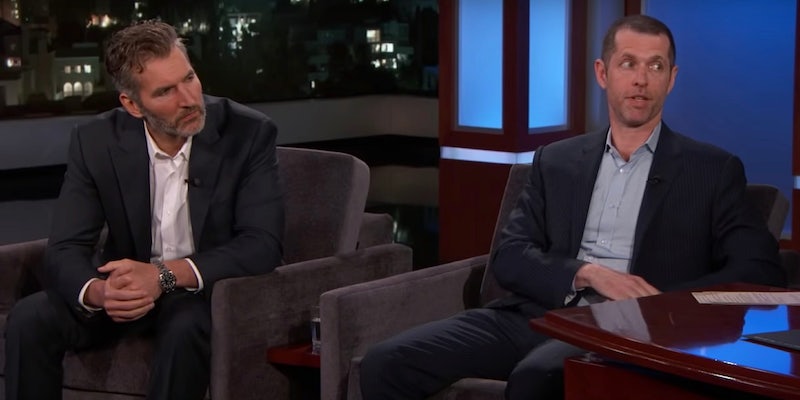 Disney said last week that it would take a three-year break from releasing new Star Wars films after Star Wars: The Rise of Skywalker arrives in theaters in December. Now we know who will get the baton next.

Lucasfilm has already confirmed that it’s developing Star Wars films from both The Last Jedi director Rian Johnson and Game of Thrones showrunners David Benioff and D.B. Weiss. Speaking at the MoffetNathanson Media & Communications Summit, Disney CEO Bob Iger announced that the first film to come out after the end of the Skywalker Saga would be a film from Benioff and Weiss.

The next #StarWars film to be released after the end of the Skywalker Saga will be by #GameOfThrones showrunners David Benioff and D.B. Weiss. $DIS

Iger’s comments, which were compiled by Slashfilm, came as Iger addressed the gap between The Rise of Skywalker and the first new film to come out in 2022 (with subsequent Star Wars films to be released in December 2024 and 2026).

“I haven’t seen [Episode] 9 finished yet, but I’m confident based on the pieces that I’ve seen and the script that I’ve read that it’s going to be extremely popular. [But we felt] that it would be smart of us to take a bit of a hiatus while we figure out what’s next. Now we’re not going to wait until [Episode] 9 is released and then start figuring it out. We’re actually hard at work doing that already. The conclusion that we reached was three years was the proper amount of time to not only take a breather and reset, but to really gear up for the next films released. We did a deal with David Benioff and D.B. Weiss, who are famous for Game of Thrones, and the next movie we release will be theirs. And we’re not saying anything more about that.”

Between Iger’s comments and the divisive reaction to Game of Thrones’ final season this week, fans have been reminded on more than one occasion over the past few days that Benioff and Weiss’ next project is a Star Wars film. It’s leaving some fans newly wary as Benioff and Weiss have been recently criticized for season 8’s controversial narrative choices, not to mention Game of Thrones’ lack of women and non-white writers and directors during the second half of the show’s run.

Nothing else is known about the “series of Star Wars films” that Benioff and Weiss are tapped to write and produce, which was first announced by Lucasfilm in February 2018. But as Lucasfilm President Kathleen Kennedy indicated last month, the future of Star Wars is being planned.

“I’m sitting down now with Dan Weiss and David Benioff…and Rian Johnson,” Lucasfilm president Kathleen Kennedy told the Hollywood Reporter last month. “We’re all sitting down to talk about, where do we go next? We’ve all had conversations about what the possibilities might be, but now we’re locking it down.”