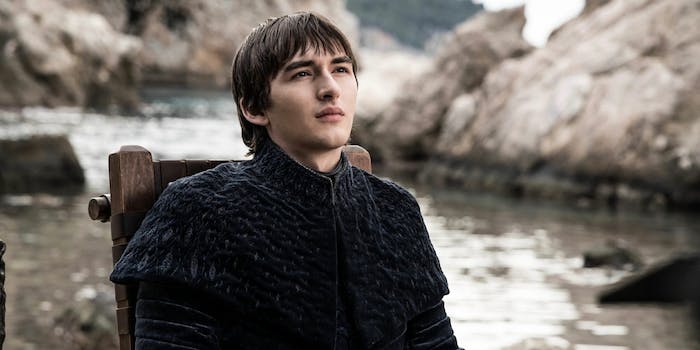 What’s the deal with Bran Stark at the end of ‘Game of Thrones’?

His fate leaves a lot of open questions.

This article about Bran Stark contains spoilers for Game of Thrones season 8, episode 6, “The Iron Throne.”

At the end of Game of Thrones, Westeros didn’t quite break the wheel so much as it redesigned it. There’s still a monarch in charge of Westeros—this time, it’s Brandon Stark, who Tyrion Lannister dubbed “Bran the Broken”—but now that ruler is elected by a Great Council; when Bran eventually dies, a new Great Council will decide on the next ruler at the dragonpit of King’s Landing.

It’s a fascinating choice, one that many people probably didn’t expect ahead of season 8; they might’ve been attached to the ideas of Jon Snow, Daenerys Targaryen, or even democracy winning the day. Viewers are given a glimpse into the first days and weeks of King Bran’s reign, which includes a farewell to Jon Snow, who is sentenced to take the Black for killing Dany, and briefly attending his first small council meeting before leaving the minute policy debates to Tyrion, Ser Davos Seaworth, Ser Bronn of the Blackwater, Grandmaester Samwell, and Ser Brienne of Tarth—and leaving us with plenty of questions.

Of course, Game of Thrones can’t answer everything—nor should it. It gives the show the sense that life will carry on in Westeros long after the final scene of Game of Thrones plays a few minutes later.

Some things were always going to be mysteries to us while other endings left the window open for fans to speculate about what the future of Westeros might look like. But among the biggest question marks left by the series is about Bran himself. He’s already one of the most mysterious characters in Game of Thrones, but even though everyone at the Great Council decided on Bran to be the next king of the (now) Six Kingdoms, we have little idea of what that might mean. We might not have all the answers, but we can always speculate aplenty on the reign of Bran Stark.

What can Bran do as the Three-Eyed Raven?

When Tyrion offered Bran the monarchy, Bran’s reply—like many he’s uttered, when he isn’t assuring people (e.g. Jaime Lannister, Theon Greyjoy, and Jon) not to linger on their regrets because they’re all exactly where they need to be—is rather wry: “Why do you think I came all this way?”

It’s not the first time that Game of Thrones suggested that Bran—who we know can see the past and present throughout Westeros—can also see the future. At least two flashes that appeared to Bran, wildfire spreading in an underground tunnel and a dragon flying over King’s Landing, had yet to pass when Bran first experienced them. While it’s not as explicit, there is at least the implication that Bran knew something when he gave Arya the Valyrian steel dagger that she would eventually use to kill both Littlefinger and the Night King

“I don’t know if Bran knows it there yet, but as he looks at it and touches it, it’s becoming clear that this is important,” Isaac Hempstead Wright, who plays Bran, told Insider at the end of season 7. “And that’s why he gives it to Arya so suddenly. He’s thinking, ‘I don’t know why, but you need this dagger.’”

Hempstead Wright also described Bran’s powers as having access to “a Kindle library of the whole history of the universe,” one he hasn’t fully explored but can be used to look certain things up with the right amount of guidance.

How much Bran might have known about the fates of everyone at Winterfell and King’s Landing, the death of Rhaegal and Missandei, and the tragedy of Daenerys Targaryen is unclear. But Bran checking in on the future to see if the Great Council is worth his time? Sure, that makes sense. You have to be practical about traveling, especially if you’re a Stark going south.

One thing that Bran could never do? Physically time travel, as the Night King theory that caught on during season 7 suggested.

The Great Council might have thought Bran was the best choice to lead Westeros, and maybe he is. But however his reign may turn out, it might be a very long one.

When Bran is appointed king, he is a teenager. While we don’t know his exact age thanks to the wonkiness of time on Game of Thrones, he’s younger than Arya, who was 18 by the time “A Knight of the Seven Kingdoms” aired.

Life expectancy isn’t an exact science in Westeros given that most of the Game of Thrones characters we meet are murdered before their time in one form or another. In fact, aside from Maester Aemon (who died at the age of 104 in his sleep), Old Nan, and the first Three-Eyed Raven, elderly characters are a rare form on Game of Thrones.

But at least according to the Three-Eyed Raven himself, he was incredibly old, even by our modern-day standards. He told Bran in season 6’s “Oathbreaker” that he had been in the weirwood tree for “a thousand years watching the world go by” as he waited for Bran.

If the Three-Eyed Raven is exaggerating, we wouldn’t blame him; the book version of the Three-Eyed Raven, who was a Targaryen bastard named Brynden Rivers before taking on the mantle, is roughly 125 years old by the time Bran meets him in A Dance With Dragons. But if he actually is 1,000 years old and has spent that long in a tree waiting for Bran, King Bran could potentially be ruling Westeros for a very, very long time. He might not live to be 1,000 like the previous Three-Eyed Raven, but there is the potential for a longer lifespan.

That is, of course, assuming that Bran doesn’t meet an untimely death by means of political assassination, illness, or accident.

If Bran can live longer than most, who’s to say that Westeros’ new system will still work by the time he dies?

By setting a precedent, they hoped that electing future monarchs would prevent cruel sons from inheriting the thrones of good fathers; Bran, who cannot father children according to his sister Sansa, sets that precedent.

“From now on, rulers will not be born,” Tyrion explained in the dragonpit. “They will be chosen on this spot by the lords and ladies of Westeros to serve the realm.”

Bran will be the first king chosen in this manner. If Bran lives to a ripe old age, most of the people alive to have set this precedent—if not all of them—will be dead by the time Bran’s life comes to an end. Bran’s administration already has the potential to be corrupt, whose to say that every person will work in the Six Kingdoms’ best interests? Or that by the time of Bran’s death, there won’t be power-hungry lords who want to take the throne for themselves in Westeros? Just because Bran might bring peace now doesn’t guarantee that it will last.

Then again, that’s the risk everyone takes when they agree to change up the government a bit.

I ask partially in jest because George R.R. Martin, who was heavily influenced by Lord of the Rings, had a similar question about Aragorn: Martin wanted the particulars to see how power and ruling a kingdom affected and changed Aragorn.

Early Game of Thrones is especially interested in those threads; just look at Robert Baratheon’s apathy toward the throne he sat on, Joffrey’s cruelty, the manipulation of Tommen, and Cersei’s calculated decisions. Even being close to reaching it was enough to destroy Dany. And sure enough, we do get a taste of what policy might look like under Bran’s reign, even if Bran himself leaves the small council meeting before his advisors start to squabble over money.

Will becoming the person to rule over Westeros corrupt Bran Stark, the man who didn’t want anything? Or is his detached nature enough to stave off those temptations? We might have reached the end of Game of Thrones, but there is enough of a thread for us wonder for ourselves.