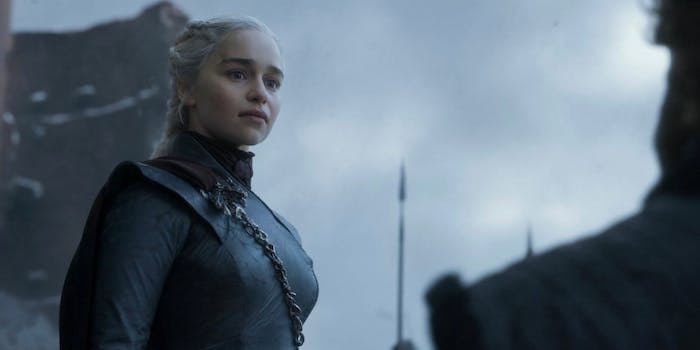 ‘Game of Thrones’ fulfilled a twisted version of its biggest prophecy

The tragedy of Dany was framed through the lens of the men around her.

Halfway through Game of Thrones season 8, Arya Stark killed the Night King, which left many fans in an uproar over the fact that a longstanding prophecy might have meant nothing.

That prophecy foretold of a savior, who’s known as the prince that was promised (and Azor Ahai in the books), who would save the world from darkness. Jon Snow and Daenerys Targaryen, the two people most qualified by circumstance to be that savior, both failed to end the Long Night. But at the end of the series, that prophecy ultimately did matter—just not in the way that we thought it would.

The Game of Thrones series finale, “The Iron Throne,” finally brought a victorious Dany to the throne room. But her reign didn’t last long: Jon stabbed Dany with a dagger as they kissed one last time. She died quickly, leaving Jon to cradle her body in the throne room. 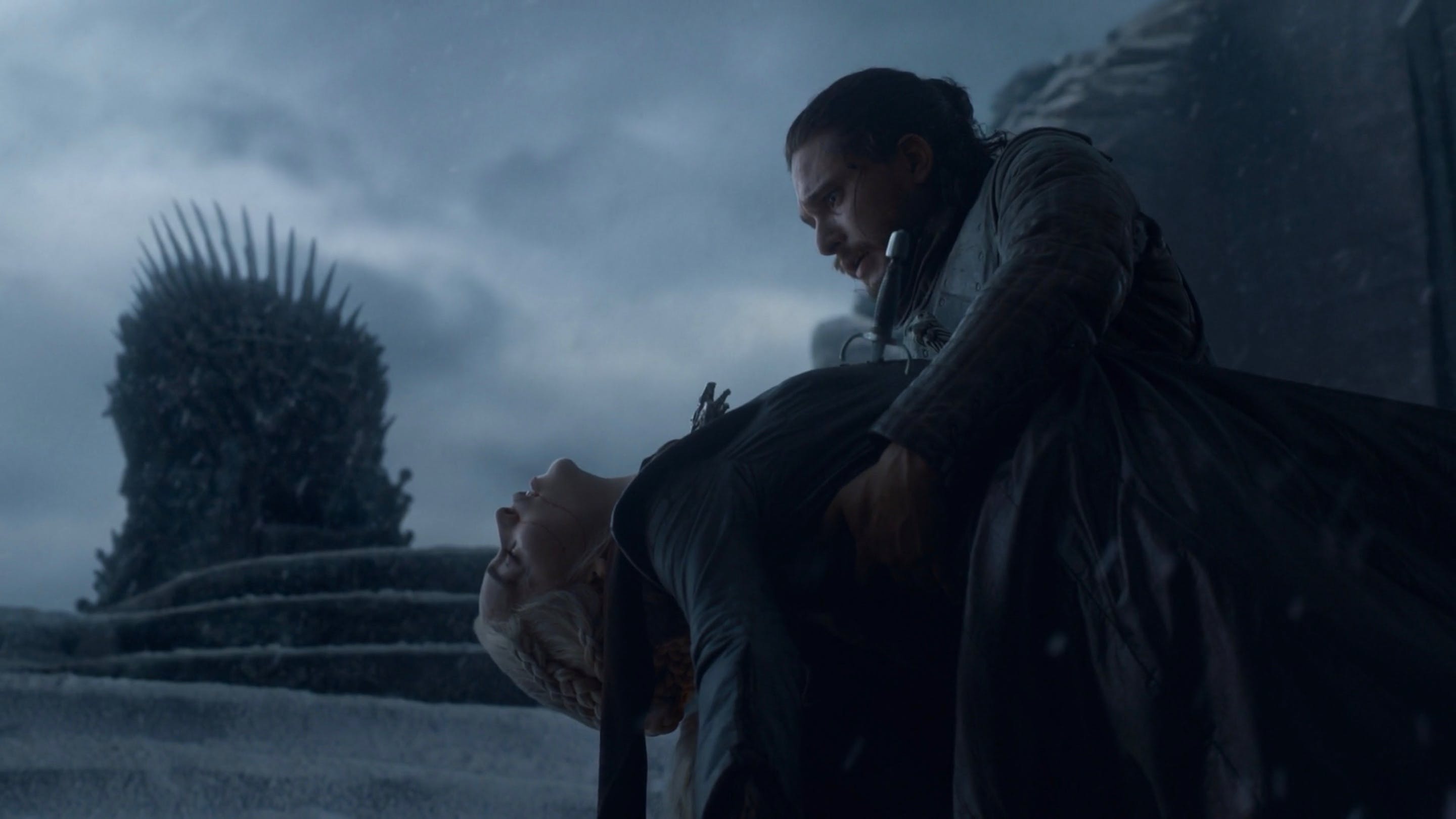 Soon, Drogon discovered Jon with Dany and turned his wrath and grief toward the Iron Throne before flying away with Dany’s body. Weeks later, a council of lords chose Bran to take over as king of the Six Kingdoms while Sansa Stark brought independence to the North.

After the events of “The Bells,” many fans had already presumed that Dany would die in the series finale—and some even correctly guessed that Jon would be the one to kill her, but up until the final moments Jon struggled with the decision. Both Arya Stark and Tyrion Lannister told him that as long as he lived, he remained a threat to Dany; Tyrion went as far to tell him that Dany might go after his sisters.

“You are my queen,” a clearly anguished Jon told Dany before he killed her. “Now, and always.”

In the end, Jon killed the woman he loved to save the Seven Kingdoms. Immediately after, Drogon departs from Westeros for what appears to be the final time. Although the circumstances differ greatly, Jon carried out a familiar tune.

We’re first introduced to the prince prophecy in the season 2 premiere, “The North Remembers.” Although nobody in that particular scene actually utters the phrase, the red priestess Melisandre relays the prophecy that would hang over Game of Thrones for seven more seasons to Stannis Baratheon, Davos Seaworth, and Stannis’ loyal subjects.

“After the long summer, darkness will fall heavy on the world. Stars will bleed. The cold breath of winter will freeze the seas and the dead shall rise in the North… In the ancient books, it’s written that a warrior will draw a burning sword from the fire—and that sword shall be Lightbringer. Stannis Baratheon, Warrior of Light, your sword awaits you.”

A Histories & Lore segment on the Lord of Light narrated by Thoros of Myr that appeared on the Game of Thrones season 3 home release further elaborates on the legend of Azor Ahai.

“According to prophecy, our champion will be reborn to wake dragons from stone and reforge the great sword Lightbringer that defeated the darkness those thousands of years ago,” Thoros says. “If the old tales are true, a terrible weapon forged with the lifeblood of a loving wife’s heart. Part of me thinks man was well rid of it, but great power requires great sacrifice. That much at least the Lord of Light is clear on.”

We even saw a casual namedrop of Azor Ahai on a scroll Gilly read in Oldtown, courtesy of a season 7 promo photo. As recently as seasons 6 and 7, others believed that both Jon and Dany could be the prince. After Melisandre resurrected Jon, she’s convinced it’s him after discovering that she was wrong about Stannis but also discusses the Long Night with Dany. The red priestess Kinvara believed it was Dany. And there has always been evidence to support either of them being the promised prince (or princess, as Missandei reminded Dany in season 7). They were both reborn amid salt and smoke—Jon with his resurrection, Dany when she walked into a pyre—and both of them have an association with dragons and stone; Dany’s is more literal, whereas Jon’s could be linked with his hidden heritage.

Even if they both failed to kill the Night King, they played vital roles in bringing about his end. They inspired thousands of unlikely factions to fight for them, united under one front, wielded weapons side-by-side, and killed countless wights atop of their dragons.

Was the Night King a red herring?

The Night King was always a threat to Westeros, and if Arya hadn’t gotten to him first, he would’ve killed Bran along with every single living creature in Westeros in order to enact his revenge. That much we know for sure, and when I pose the question of potential red herrings, I don’t mean in the sense of whether Night King was a danger to the living.

But no matter how dangerous he was, the final battle still ended up being over the throne. One queen took out another. And then the man who could’ve been king took her out to save the Seven Kingdoms from what could’ve been another reign of darkness upon the world—one fueled by fire instead of ice. 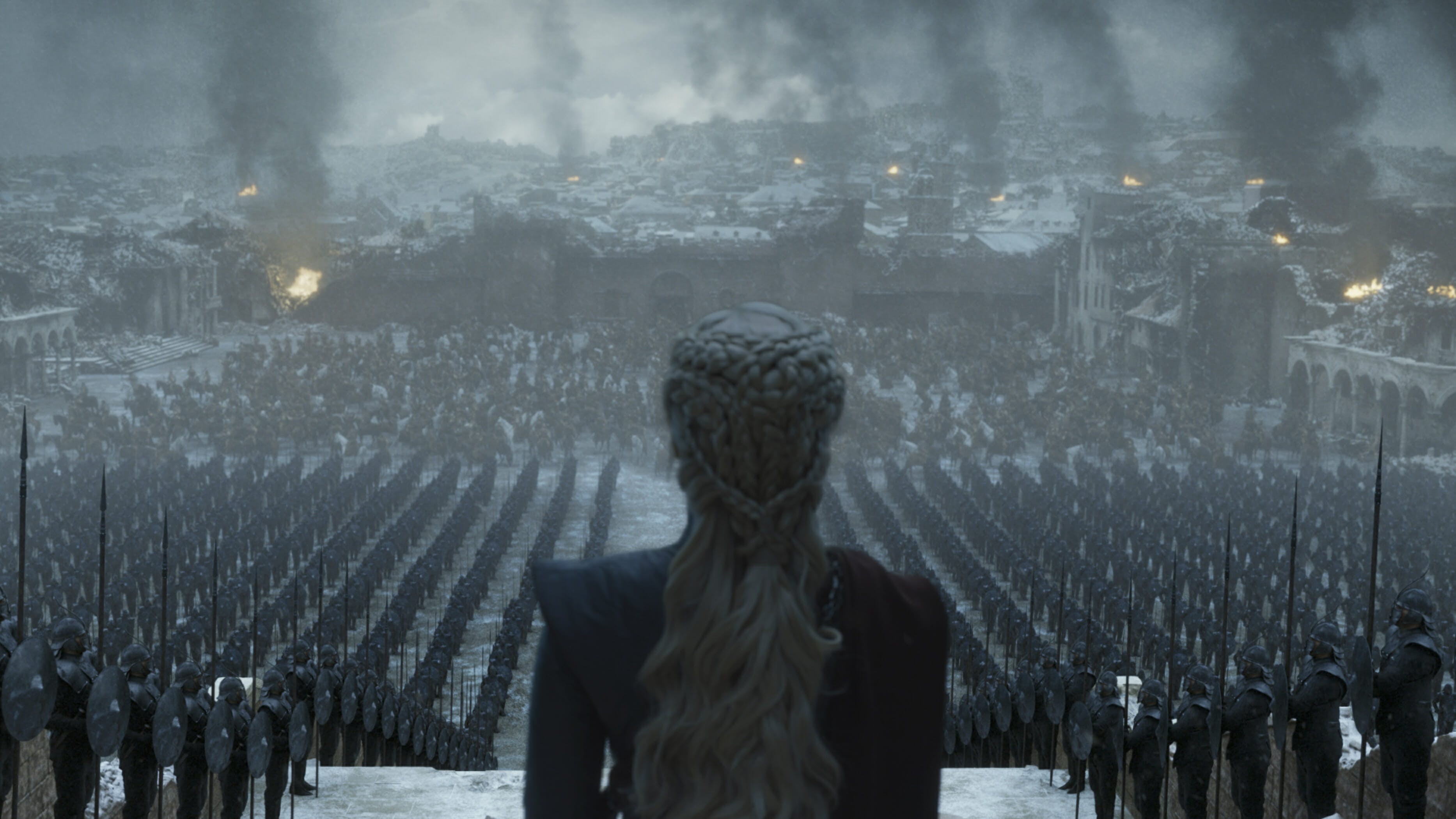 According to Peter Dinklage, showrunners David Benioff and D.B. Weiss made comparisons between Dany using Drogon to burn down King’s Landing and the atomic bombs dropped on Hiroshima and Nagasaki. In a 2011 interview with Vulture, George R.R. Martin called dragons the “nuclear deterrent” (although some have argued that wildfire better fits that comparison). It’s evident that Dany has wielded her dragons like weapons for a long time, but only until now did Tyrion and Jon realize that Dany was willing to turn Drogon onto the innocent as well as the evil men she’s spent years burning. Even if it was clumsily handled in its execution on Game of Thrones, the foundations of Dany’s tragic turn (and likely end) are all over A Song of Ice and Fire.

Fresh off her victory at King’s Landing, Dany pledges to free the entire world from bondage. She plans to send her forces to the ends of the world to bring fire and blood their way. In Dany’s mind, her way is just. To everyone else, she’s very similar to the ruler they removed from power—only this time with the capacity to destroy the entire world with a single word. 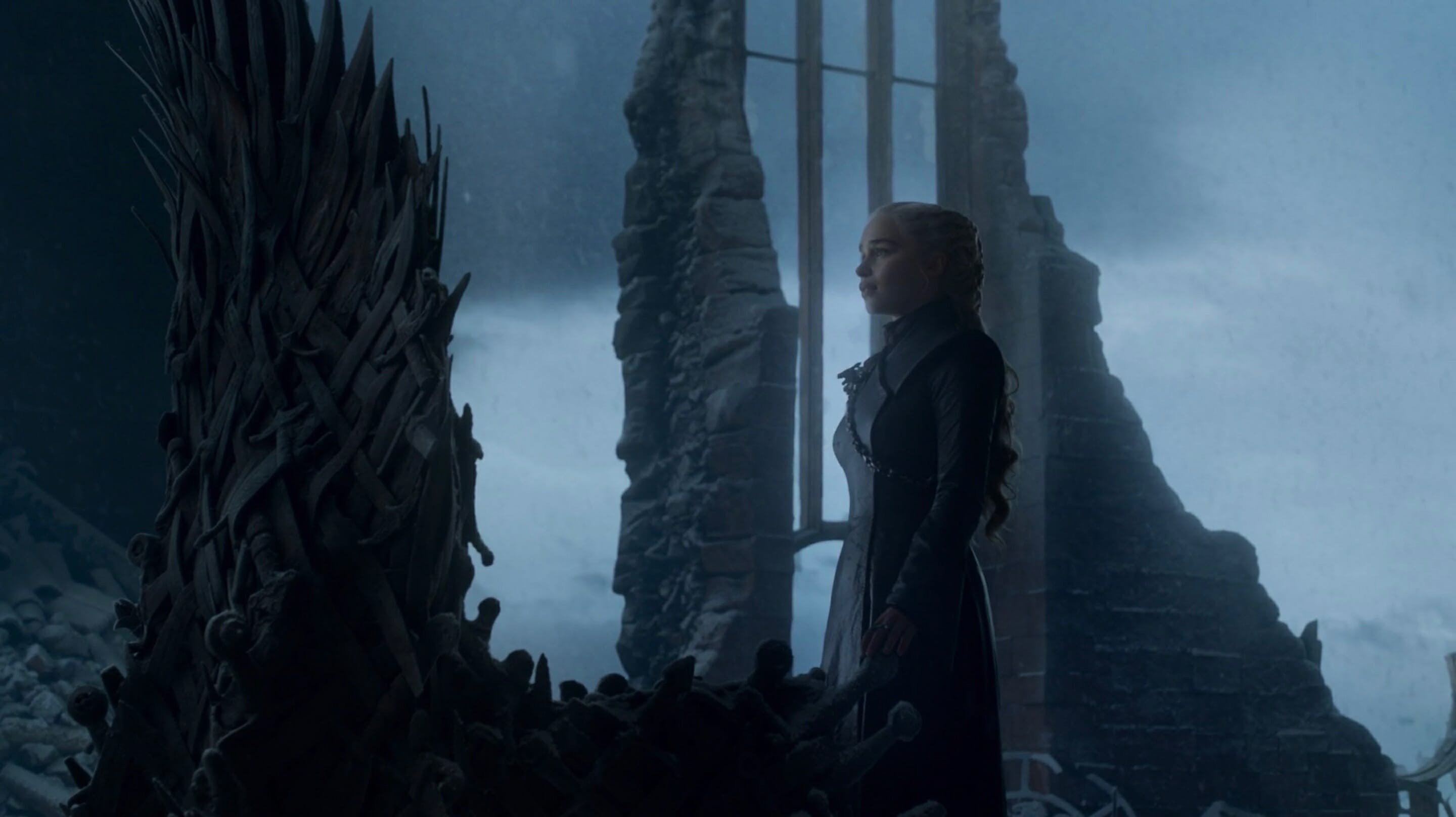 “You are the shield that guards the realms of men,” an imprisoned Tyrion tells Jon. “And you’ve always tried to do the right thing. No matter the cost, you’ve tried to protect people. Who is the greatest threat to the people now?”

Dany’s vision in the House of the Undying finally realized

In the season 2 finale, “Valar Morghulis,” Dany is thrust into a vision in the House of the Undying as she searches for her dragons; the scene is more complex and differs from the books, but the existence of a vision remains the same between the two. Most of the show’s vision has now come to pass.

In season 2, Dany hears a cry far in the distance, and she abandons the throne long enough to investigate the sound, which turns out to be Khal Drogo and her son Rhaego. In season 8, there’s nothing to stop Dany from touching the throne. But it also, several seasons ahead of time, appeared to foretell the location of Dany’s death and what led up to it. If Dany had better luck than Jon in death, she might’ve even been reunited with her family, fulfilling the final part of Dany’s vision.

The one thing that Game of Thrones tried to sell us—how successfully it did so, your mileage might vary—throughout “The Iron Throne” was how difficult it was for Jon to ultimately kill Dany. Jon loved her, of course; Tyrion did too. He pledged an oath to serve Dany loyally, and he did even as she burned King’s Landing street by street. Jon might have started Game of Thrones by emulating Ned Stark, but in the end, he made the same choice as Jaime Lannister: kill the monarch, save the kingdoms.

When faced with the darkness (that is, the reign of terror that Dany might enact onto the world), Jon sacrificed the person he loved most—Dany—by stabbing her in the heart. There might not have been a literal sword named Lightbringer that came out of it of that death, but Drogon did light up hundreds of swords when he torched the Iron Throne. When all was done, smoke rose from the remains of the Iron Throne while Jon’s face was still streaked with salty tears. (Given that tears are an indicator of Jon’s role as the prince in ASOIAF, this isn’t the world’s biggest stretch.)

As a result, the creature who could’ve burned Westeros to the ground left the country for good. And even after Jon killed Dany, Jon isn’t sure if he made the right decision.

The tragedy of Dany’s end was largely framed through the lens of the men around her, particularly Jon and Tyrion in the series finale as they reminded the audience of all of the dead bodies she burned to get to King’s Landing. Dany, who’s resorted to begging Jon to stay with her in previous episodes, spends some of her final moments trying to convince Jon to follow her. When Dany finally does die, it’s Jon’s face we often linger on more as he cradles her, his anguish over murdering the woman he loved apparent on his face. Some proper manpain, if you will. 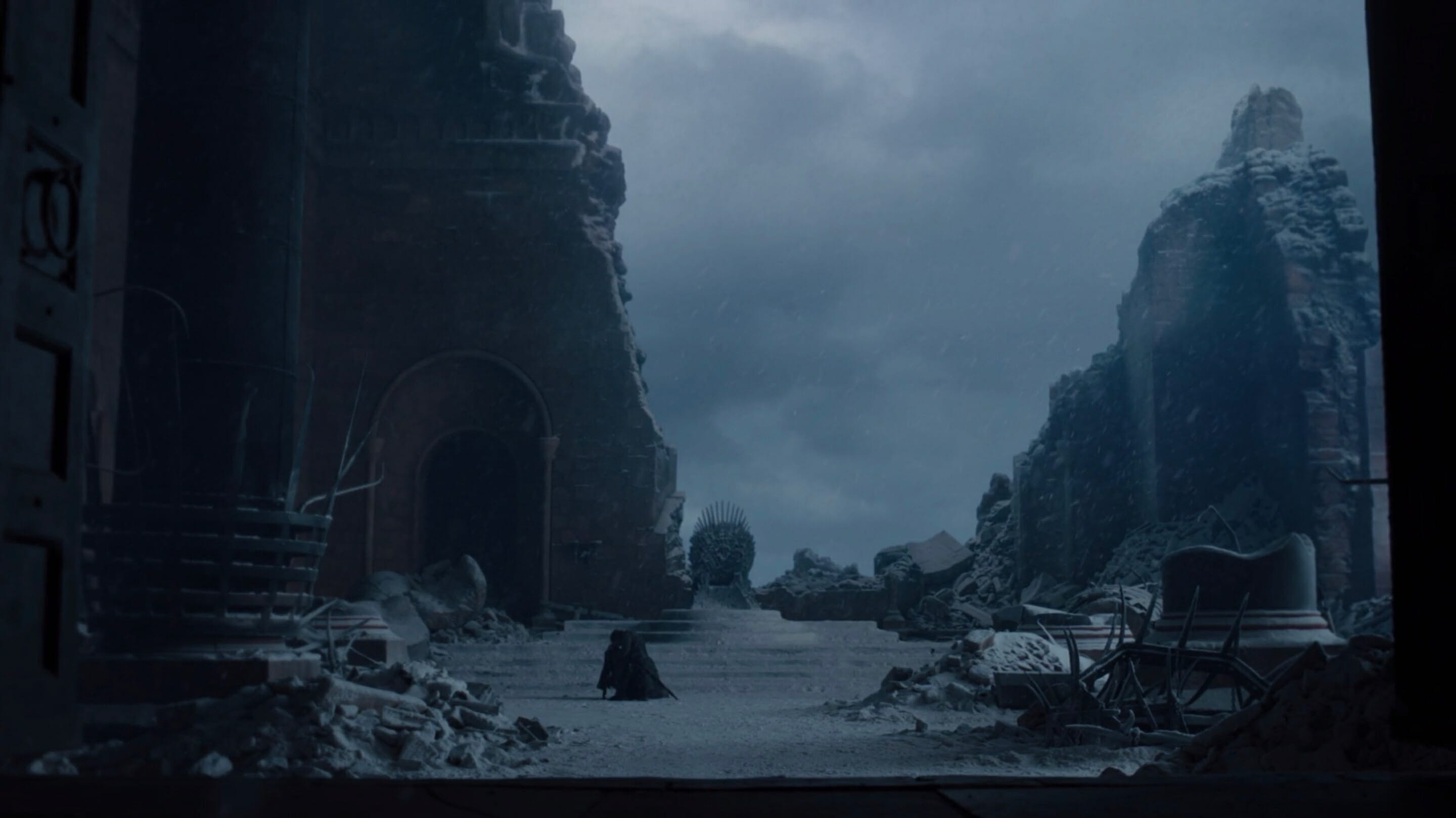 We’re left in the dark about what might be going on in Dany’s head for much of season 8 (and especially the finale), so while the show frames her death as one final twist, it only widened the disconnect between the threads that got us here and what happened; Dany feels like a passive player in her own death, even though it’s supposed to be because of all of the choices she made—and an inevitability. Instead, what we end up getting is a somewhat disappointing end to one of Game of Thrones’ most intriguing characters.