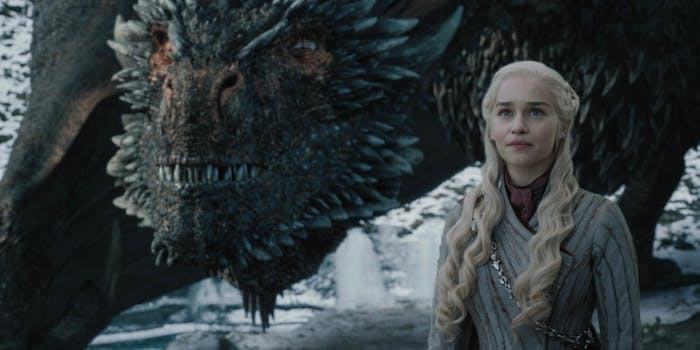 ‘Game of Thrones’ just did its women dirty

Teases, heartbreak, and scheming—and not all of it lands well.

Warning: This article contains spoilers for the latest Game of Thrones episode, “The Last of the Starks.”

For a couple of seasons now, Game of Thrones has emphasized the power that many of its female characters hold. They’re in charge of the Seven Kingdoms and their own forces. They control castles and entire regions. They’re skilled warriors, assassins, advisors, and knights. They held their own when they faced the Night King and the Army of the Dead.

But much of that went out the window in an episode filled with fracturing relationships, undermining character arcs, begging, and a big death that will not sit well with those who witnessed it both within and out of Westeros.

After the living’s victory at Winterfell last week, the survivors celebrate before looking to the south. Of course, if Daenerys Targaryen and Jon Snow are going to wage war against Cersei Lannister, it’s not going to go well. People will get hurt, captured, and killed. There will be potential prisoners, traitors, and schemers among their own.

“The Last of the Starks” also shook up the foundations of many of its female characters and did them a disservice as the show dashes toward its end, making the lack of diversity behind-the-scenes all the more apparent. While some edged out with wins, others’ stories are leaving a bitter taste.

Arya Stark, the hero of Winterfell, is in a strong position. She “celebrated” her victory by shooting more arrows and receives a proposal from the newly legitimized Gendry Baratheon, the Lord of Storm’s End. He asks Arya to be his lady, something that Arya has never been into. Despite tapping back into a bit of her humanity by sleeping with Gendry in the first place, revenge is still the biggest thing still on her mind. And it always will be until she crosses off every name from her infamous list.

So she heads off toward King’s Landing with all intention of murdering Cersei, and she once again travels with her longtime companion, who’s got a zombified brother to murder along the way. Neither of them expects to return.

The future of Westeros is in the likes of Gilly

Although Gilly doesn’t have much to do this episode, she and Samwell Tarly do get a quick moment to reveal that she’s pregnant while Sam tries to awkwardly explain how it happened. If it’s a boy, they promise to name the baby Jon after Jon Snow; Jon instead hopes they have a girl. The last time someone promised to name a baby after a male Stark, it did not go well, so we hope that Sam, Gilly, and their new baby have much better luck with that than Robb Stark and Talisa Maegyr. The show hasn’t spent much time with Gilly outside of her being a mother (especially not since Oldtown), and given this latest development, it probably won’t.

Does it matter that Sam broke his Night’s Watch vows—“I shall… father no children”—and was supposed to be celibate as a maester? Granted, Sam didn’t make those maester vows, but given that Sam helped ensure that the apocalypse didn’t take out all of Westeros, it’s probably the thing that’s least on everyone’s mind.

If you’ve been shipping Jaime and Brienne for years, that all paid off in a big way as the two knights of the Seven Kingdoms hooked up after a night of drinking. While it results in Brienne losing her virginity (and Jaime sleeping with a knight for the first time), it’s not just about the sex. Jaime planned to stay in Winterfell alongside Brienne, who’s still Sansa’s sworn protector. But once Jaime learned about Cersei gaining the upper hand on Dany once again, he decides to return to her. Brienne catches him sneaking out, which leads Jaime to relay just how much of a terrible man he is before leaving Brienne in Winterfell, who’s full-on sobbing.

It doesn’t sit well. Jaime, after seasons upon seasons of character growth, appears to regress at the first mention of Cersei and runs back to her. It also shows Brienne, who’s more stoic to the point where a smile after being knighted was noteworthy, shockingly gutted in out-of-character fashion. But just because we’ve never seen Brienne become visibly upset over the person she’s been the most vulnerable with doesn’t mean it’s not a valid feeling.

And there might be more at work underneath the surface, which would take the bitterness out of undercutting their first moment together. Jaime’s cruelty is almost reminiscent of Arya trying to get Nymeria to run away by throwing rocks at her—being mean to protect her—and be part of a mission to stop, not save, Cersei.

We finally got the Sansa and Hound reunion we’ve been waiting for, which features both mention of the “Little Bird” moniker that the Hound gave her and a reference to what Sansa has been through. The Hound believes that had Sansa left King’s Landing when she did, she’d have been saved from all of the cruelty she’d been put through. But instead of regret, Sansa expresses a small kind of gratitude for it.

“Without Littlefinger, and Ramsay and the rest, I would have stayed a Little Bird all my life,” Sansa told him.

Like Bran’s acknowledged with others throughout season 8, there’s no point in dwelling on past regrets because it got you to where you are. But with Sansa’s assertion of a similar sentiment, it gives off the impression that she thanked her rapist for getting her to this point.

But if you thought that a victory in Winterfell would curb the brewing Dany and Sansa feud, think again. They butt heads once again during battle planning to take King’s Landing, and when Sansa finally learns the truth about Jon, she breaks her promise to him and tells Tyrion about it. Which puts some very dangerous thoughts in Tyrion’s mind.

Cersei Lannister already showed us who she was. Believe her

Cersei is known for carrying out her twisted sense of sovereignty on Game of Thrones—just look at how she repaid Ellaria and Tyene Sand for murdering Myrcella Baratheon last season—and when Euron Greyjoy captures Missandei, it’s no different. To prepare King’s Landing for a possible attack, she puts the people of the capital into harm’s way, leaving Dany with having to possibly kill thousands of innocent people if she wants to take the throne. And when Dany refuses to surrender, she has Missandei executed in plain sight.

Missandei of Naath deserved much better

Killing off someone like Missandei, who’s about as good and decent of a character as you can get on Game of Thrones, was never going to sit well. But by doing it in this manner came with unintended consequences: Game of Thrones killed off the only woman of color left on the show to motivate a white woman and the man who loves her, and in effect, fridging her. After complaints from “The Long Night” by fans about how most of the casualties were people of color, it’s not a great look.

For years, fans have criticized Game of Thrones for its lack of diversity (e.g. most of Westeros is white), which has a basis in George R.R. Martin’s books. Notable characters of color have largely been part of Dorne, something that was largely a non-entity after season 5 and nonexistent after season 7, or characters in Essos. That’s largely been represented by Missandei and Grey Worm, who were often given more to do than their book counterparts but still paled in comparison to what other characters got to do.

We were first introduced to Missandei in season 3 as a translator and slave in Astapor. She was in chains but given to Dany by Kraznys mo Nakloz. When Dany pretends to give up Drogon in exchange for the Unsullied, Missandei witnesses Dany become the “Breaker of Chains” before her eyes. So there’s a special level of cruelty in Cersei putting a former slave back in chains and then mocking her for it.

After Dany doesn’t surrender, Missandei is offered the chance to say her final words. Defiant, Missandei utters “Dracarys” (the command the Dany uses whenever her dragons breathe fire) before she is beheaded.

Dany can’t ever win, can she? She legitimizes Gendry and toasts Arya, but no matter what she does, Jon will always outshine her among the men of Westeros. Even more so now that more people—mainly Varys and Tyrion—know about Jon’s parentage. When they’re not trying to push the two to get married, they’re looking at Jon as a potential ruler in part because he doesn’t want the throne. They’re essentially making the argument that Jon is much less likely to go off the handle compared to Dany.

“He’s temperate and measured,” Varys says. “He’s a man, which makes him more appealing to the lords of Westeros, whose support we are going to need.”

This is an episode where Dany has to be talked down from burning the city yet again. It shows Dany, for what’s probably the first time in her life, begging Jon not to tell Sansa and Arya about who he really is. She wants to drive south and pays the cost for it with Rhaegal, the destruction of her fleet, and with Missandei. She even spouts off about destiny as to why she should rule. And her advisers are talking about how she’s too emotional and unstable to rule the Seven Kingdoms.

Since arriving in Westeros, Dany has lost more than just about anyone. Game of Thrones may have taken shortcuts and the use of a terrible trope to get there, but Dany might have finally reached her breaking point to finally just burn King’s Landing to the ground. We’ll have to wait for the final two episodes to see if Game of Thrones earned it.