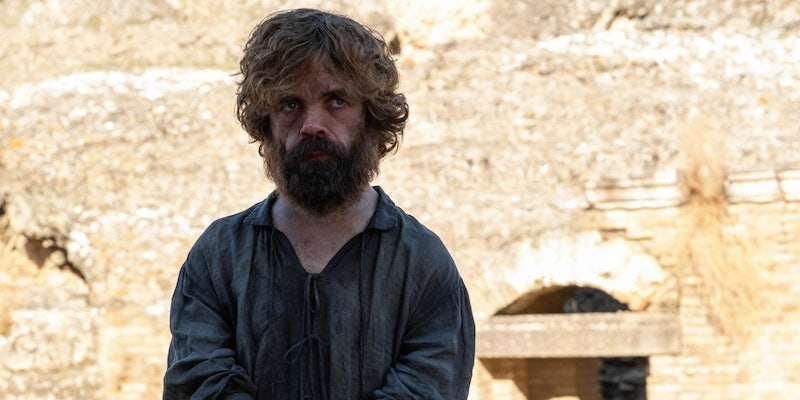 Things got really confusing in those last few episodes.

Fans have been very vocal in their disdain for the series finale of Game of Thrones last Sunday. At this moment, a petition calling for the entire final season to be rewritten has nearly hit its goal of 1.5 million signatures. At least the question of who won the game of thrones seemed inarguable—until a Reddit user dropped a knowledge bomb Monday: Everyone might have missed Tyrion Lannister’s brief reign on the iron throne.

“According to all the laws and traditions of Westeros, Tyrion was the King. They just didn’t spell it out for the laymen. It’s [George R. R. Martin’s] final subversion,” user AgnostosTheosLogos wrote. “The unspoken hero. The unacknowledged breaker of the wheel. The silent, unglorified, last King of the 7 Kingdoms of Westeros. The uncredited, tiny little savior.”

It’s understandable, given the chaos after the gruesome battle of King’s Landing. There were a lot of bodies to keep track of, after all. According to a thread the user posted apropos in a pro-Tyrion subreddit, the logic goes like this:

Cersei Lannister became the ruler of Westeros after the death of both her husband King Robert Baratheon way back in season 1 and her last remaining child in season 6. Robert’s only living son, Gendry Baratheon, is a bastard and could not inherit the throne unless recognized by the crown. While it’s true Daenerys Targaryen named him the Lord of Storm’s End after the battle of Winterfell, she would have to legitimize him while acting as Westeros’ monarch for it to be official. At the time, she was only the leader of an insurgent force.

While all that may be hard to follow, things don’t get truly crazy until the finale. In the span of two episodes, Cersei gets crushed along with the next rightful heir, her brother Jamie. Then, Daenerys takes the iron throne for all of two seconds before Jon Snow stabs her. And since Jon refuses to claim it, the crown’s in dispute and ultimately handed off to Bran Stark by a council vote.

Except, there’s still one Lannister left: Tyrion. Since no Targaryen inherited the monarchy, and the only Baratheon heir is a bastard, the rule would have fallen back to his family, the last one on the throne.

“Tyrion won the game of thrones, broke the wheel, then gave up the prize. All without ever getting any of the credit, because [George R. R. Martin] has a hard-on for the unsung hero,” the user wrote.

Of course, since Tyrion also nominates Bran as Westeros’ new leader, the point is ultimately moot. But if this logic proves true, it’s hard to believe someone as smart as Tyrion wouldn’t have put two and two together in such a situation. It puts his rousing speech to the council in the last moments of the finale in a new light, at least.