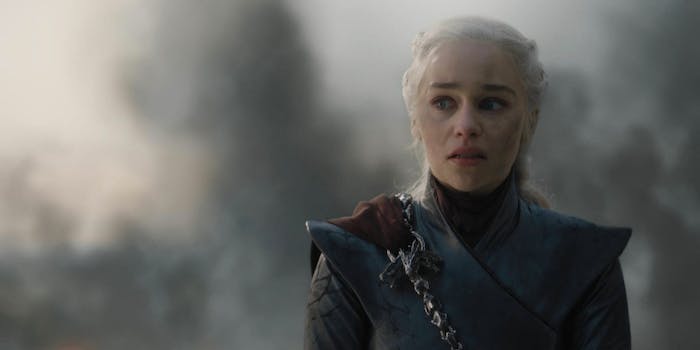 The final season of Game of Thrones has, to put it simply, divided much of the internet—especially after the most recent episode revealed Daenerys Targaryen’s villainous turn as she set Drogon off to burn King’s Landing (and the people in it) to the ground. But for some fans, it’s not the only issue they have with season 8 to the point where they want a do-over.

Last week, someone going by the name of Dylan D. launched a Change.org petition calling for HBO to “remake Game of Thrones season 8 with competent writers.” Dylan D.’s plea was simple: it called for HBO to remake the final season of Game of Thrones because creators David Benioff and D.B. Weiss were “woefully incompetent writers when they have no source material (i.e. the books) to fall back on.”

While Dylan D. started the petition before “The Bells” aired, it caught on like wildfire after fans saw the penultimate episode. When Change.org started pitching the petition to journalists, more than 15,000 had signed it. A day later, the number of signatures rose to more than 420,000 as of press time, the sudden interest likely sparked by the amount of coverage the petition had gotten as well as the people who scoffed at it and treated it like a joke.

Because ultimately, that’s kind of what this is. HBO is not going to remake an incredibly popular and expensive piece of television no matter how many people sign a petition for it precisely because it was an incredibly popular and expensive piece of television. (There’s even a counter-petition going around that’s calling for people to “stop signing petitions forcing TV shows and movies to meet your demands.”) Of course, Game of Thrones is not perfect or above criticism. But it’s still not going to happen.

Sometimes, fan backlash can lead to the change that fans are seeking or at least detail the frustrations of a piece of media’s failures in more detailed ways than “I don’t like it.” Bioware extended the ending of Mass Effect 3 after fans disliked the original ending back in 2012. Enter the Gungeon tweaked its game so that players could pet a dog after @CanYouPetTheDog highlighted that you couldn’t pet the dog in the game. Some fan campaigns called for an ending that they know exists while others have spent years calling for a cut of a film that only might exist.

However, the petition to remake Game of Thrones season 8 is not that. It reeked of the worst kind of fan entitlement when fans called for a remake of The Last Jedi last year and it does here as well. Even though I’ve been fairly critical of season 8, I don’t see much of a point to signing a petition to remake the final season. It’s not like it’s gonna happen.

Hypothetically speaking, remaking Game of Thrones season 8 would require at least an eight-figure budget—season 8 cost $15 million an episode to make. You would have to hire a crew to work tirelessly to produce the same quality show (at least on a technical level) that we already got—and replace people who might have gotten new jobs since then. You’d have to rope in the cast, who by their own words, is ready to move on after spending a decade making Game of Thrones. The writers seem ready to move on as well.

Granted, maybe not everyone who signed the petition calling for HBO to remake Game of Thrones season 8 actually believes that HBO will follow through. (Because it won’t.) It might just be a way for people to show their displeasure for Game of Thrones. But there are other ways to vent your frustrations over the quality of a show than signing a pointless petition. (Have you checked the Twitter discourse lately?)

Who knows? We’ve got at least one prequel series in the works, and chances are, HBO won’t be done in Westeros once Game of Thrones is done, especially when George R.R. Martin finishes his books. But if you’re still left cold by Game of Thrones season 8? Write your own ending. If anything about the end of Game of Thrones is guaranteed (aside from the fact that it won’t please us all), it’s that the fanfiction that stems out of this final season is gonna be amazing.