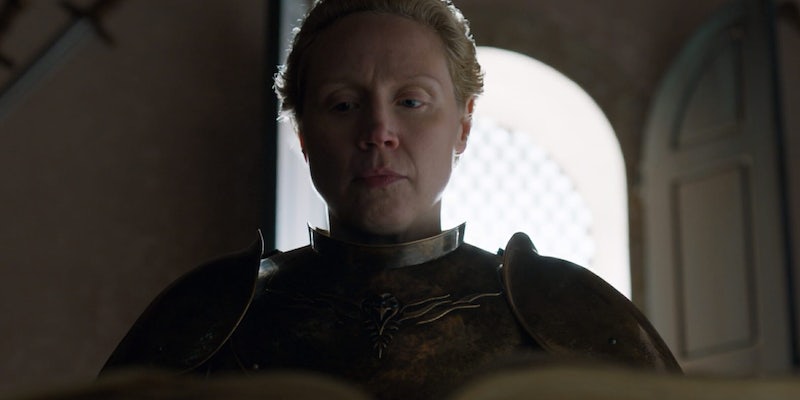 Was she too kind?

This article contains spoilers for the Game of Thrones series finale.

So if anything else was expected of the final episode Sunday night—besides Dany getting killed—it was another round of great memes. At least in that regard, the finale did not disappoint. Game of Thrones left us with one scene that was made to be memed: Ser Brienne of Tarth, now Lord Commander of Bran’s Kingsguard, writing Jaime Lannister’s entry in the Book of Brothers.

This is actually a callback to an unforgettable moment between the two in a season 4 episode, in which Jaime tells Brienne that it’s the “duty of the Lord Commander” to record the deeds of everyone who served in the Kingsguard in the Book of Brothers, also known as the White Book.

Thus, Brienne did her duty, even managing to put a positive spin on Jaime’s decision to leave her to go back to Cersei, writing in conclusion to Jaime’s entry, “Died protecting his Queen.”

Instead of celebrating how Brienne ended the series as the highest ranking officer of the Knights of the Kingsguard, viewers couldn’t handle her writing about Jaime’s heroic deeds, especially that last line. They reacted with memes, of course.

Some fans were emotional about Brienne remembering only Jaime’s good deeds.

BRIENNE WROTE ALL OF JAIME’S GOOD DEEDS BC SHE KNEW HIM SHE KNEW THE REAL JAIME SHE KNEW SHE COULD DO HIM JUSTICE AND SHE KNEW ANYONE ELSE WOULD PAINT HIM IN A NEGATIVE LIGHT AND DESPITE ALL OF HER PAIN SHE REALLY DID THAT I’M- pic.twitter.com/qeM2ctVRq3

Watching Brienne finish Jaime’s story with nothing but love and honor after the way he treated her really fucked me up. #gameofthrones pic.twitter.com/2GFpSzSssa

Some think it’s the “same energy” as an ex-girlfriend only having good things to say:

This is the same energy to me pic.twitter.com/8giVxP2zdF

Overall, people were disappointed that Brienne took the high road after what Jaime did to her.

Thought they were letting Brienne *literally* write her own story of becoming a knight, but nope. She glorifies..Jamie. #GOT pic.twitter.com/RBlk98qeWE

Twitter had a lot of suggestions for what Brienne should have written instead.

For starters, why couldn’t she have mentioned that Jaime was actually the one who knighted her?

All Brienne should have written in that book was "he knighted the first woman knight, Ser Brienne of Tarth." & then started her own fucking chapter.

Fuck D&D for wrapping up her storyline defending a dude who left her crying in the dark (wearing and amazing cape).#GameofThrones

Some kept it short and sweet:

While others think Brienne should have deemed Jaime a “fuccboi”:

Some think Brienne was writing in the Mean Girls’ Burn Book:

Yeah, I thought Brienne was writing in this thing. pic.twitter.com/Vj22gMs04L

Maybe Brienne should have written that Jaime “had a good bepis,” which @vqnerdballs thinks is “how he’d want to be remembered.”

it's how he'd want to be remembered #gameofthrones pic.twitter.com/PZY58Sjmoy

Fans also had theories about what Brienne was really writing or wanted to write, like “Brienne was so good in bed that he went crazy and went to die with his sister. Yeah, that’s what happened,” @_Zeets tweeted.

"Brienne was so good in bed that he went crazy and went to die with his sister. Yeah. that's what happened." pic.twitter.com/WvKRUItxgv

“And also Ser Jaime died while telling Cersei that he was in love with Brienne who was super hot the end” pic.twitter.com/9yr5i3lvHK

Or maybe she’s doodling Ser Jaime’s name—with a heart on the “i.”

Some think she was really saying nasty things about Cersei (in a “deleted scene”):

Basically anything else but what she wrote:

Brienne writing about her ex-lover’s good deeds has also become a mood. As @nadiamy tweeted, “Brienne is all of us single ladies who are making it fine in our career but got screwed in our relationship #wegotthepen.”

Brienne of Tarth: Men ain't shit. They fuck you, then they go and die in the arms of some other bitch.#GameOfThrones pic.twitter.com/wokWR54TCi

I guess it makes sense that, after choosing Bran The Broken to be the new king just for knowing all the stories, the Lord Commander of the Kingsguard would now be into “blogging” or “scrapbooking.”

Brienne of Tarth, more like Brienne of Marth…a Stewart, my good bitch is up here SCRAP BOOKING

ser brienne of tarth writin’ history without an editor or fact checker in workout clothes she is a blogger i dig it pic.twitter.com/mEEQYvuY0Y