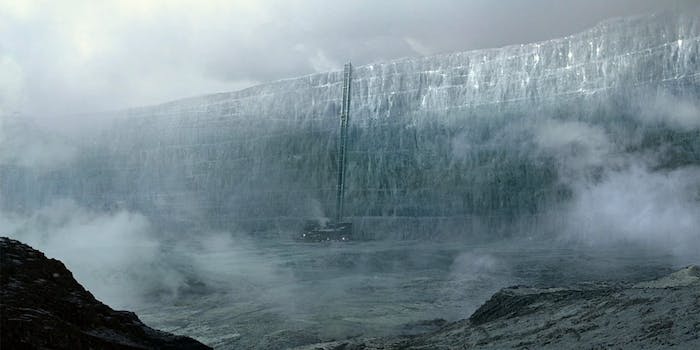 There's one thing standing in the way of the White Walkers.

As Cersei Lannister and Daenerys Targaryen fight amongst each other for the Iron Throne, Jon Snow has been preparing for a much bigger threat on their doorstep. And the main reason the Night King and his army haven’t already taken over Westeros is that something has been standing in their way since long before the Seven Kingdoms existed.

Located at the northern edge of Westeros, the Wall has been a part of Game of Thrones since the very beginning. It’s one of the few constants in every Game of Thrones opening sequence, which animates Castle Black and the Wall. It’s also one of the single largest features of Westeros. It peaks at around 700 feet (roughly two football fields stacked end to end) and spans 300 miles across the northern border of Westeros. (That’s just shy of the distance between Chicago and Cleveland.)

It’s weathered through thousands of years of wear and tear and the occasional climb by daring wildlings. Although men expanded it over thousands of years, there’s always been something not quite human about the Wall. And long before Bran Stark ever encountered the Night King, many fans have been convinced that one day it would fall.

For now, the Wall still stands. But the Night King marches south, and as Jon told Dany in the episode preview for “Eastwatch,” Bran saw the Night King and his army approaching Eastwatch-by-the-Sea, the easternmost castle maintained by the Night’s Watch in Westeros. How much longer will it last?

With the threat of the Night King, the White Walkers, and an army of wights approaching, characters have referenced “The Long Night,” a legendary and harsh winter that lasted a generation, in every episode so far this season. It’s an important point in Westerosi history not only because it can warn everyone of what might happen to them, but because of what came out of it.

During that winter, which took place approximately 8,000 years before the beginning of Game of Thrones, the White Walkers (who were created by the children of the forest) descended onto Westeros. It was only after the children, the First Men, and a legendary figure who might’ve been Azor Ahai teamed up fight against the White Walkers that they defeated them. That final fight, called the Battle for the Dawn, drove them back far north. Once the threat of the White Walkers disappeared, the survivors made sure to protect themselves in case it were to ever happen again: both the Night’s Watch and the Wall came out of the Long Night. It’s hard to mention one without the other, because the Night’s Watch resides at the bottom of the Wall, guards it, and fixes it when cracks appear or ice chunks break free.

The thinly stretched Night’s Watch only won the battle against Mance Rayder’s wildling army because Stannis Baratheon’s army intervened. They’re even less prepared for the very real threat of White Walkers and wights approaching their doorstep, a mission that many of the brothers had forgotten because their origins had turned into myth.

“The Night’s Watch has forgotten its true purpose, Tarly,” Jeor Mormont said to Samwell Tarly in A Storm of Swords. “You don’t build a wall seven hundred feet high to keep savages in skins from stealing women. The Wall was made to guard the realms of men … and not against other men, which is all the wildlings are when you come right down to it. Too many years, Tarly, too many hundreds and thousands of years. We lost sight of the true enemy.”

A Stark and (possibly) some children and giants raise a Wall

Like the Long Night itself, the actual story behind the creation of the Wall is mostly lost to the passage of time. The common story heard by children of Westeros is that it involved Brandon (Stark) the Builder, magic woven into structure itself, and giants.

The World of Ice and Fire also alludes to that legend, although its in-universe author, Maester Yandel, doubts the validity of the claim.

Legend has it that the giants helped raise the the Wall, using their great strength to wrestle the blocks of ice into place. There may be some truth to this though the stories make the giants out to be far larger and more powerful than they truly were. These same legends also say that the children of the forest—who did not themselves build walls of either ice or stone—would contribute their magic to the construction. But the legends, as always, are of dubious value.

According to the works of another maester, Brandon the Builder—the founder of House Stark—sought out the Children of the Forest to help him raise the Wall with their magic. He’s credited not only with building the Wall, but also parts of Winterfell and Storm’s End among other feats, leading some to believe that the extent of his life’s work has been exaggerated. He’s why Brandon is such a popular Stark name. Ned’s older brother was a Brandon, murdered by King Aerys II Targaryen, and there’s also Bran himself.

Parts of the Wall were made of stone, while much of it was believed to be built with blocks of ice taken from the haunted forest north of where the Wall. It contains tunnels for the Night’s Watch to move around and through it, and it’s wide enough at the top that 12 knights in armor could ride on horses across it. George R.R. Martin said in 2000 that there’s more ice than stone in the Wall and took thousands of years of building to get to its incredible size.

The magic embedded deep within the ice

As Martin hinted—and we see in both Game of Thrones and A Song of Ice and Fire—pure ice isn’t the only thing incorporated into the Wall. In Sam’s narration about the history of the Wall, which is part of Game of Thrones’ animated Histories & Lore Blu-ray series, he hints at the Wall’s treacherous nature against those who attempt to climb it. Jon also believed that Wall had protections after witnessing wildlings fall to their deaths as he climbed it with them in A Storm of Swords; the experience led Ygritte to tell Jon that it was “made o’ blood.”

But the largest and (so far) unexplored kind of protection is part of the fundamental reason it was built in the first place. It’s not to keep wildlings from entering Westeros, though it often does that, but to keep the dead out.

“Beyond the Wall the monsters live, and the giants and ghouls… but they cannot pass so long as the Wall stands strong and the men of the Night’s Watch are true,” Bran recalled Old Nan telling him in A Dance With Dragons.

Game of Thrones took a different approach to the introduction of the Wall’s magic. We see first-hand that wights cannot enter the Three-Eyed Raven’s cave in “The Children”: their bodies exploded as they attempted to enter the cave after Bran, Meera, Hodor, and Summer. The protections of the cave kept Bran hidden from the Night King until he touched Bran’s arm in the episode “The Door.” With the protection barrier down, it didn’t take long for the Night King and his army to follow.

And when Meera couldn’t take Bran any further, a pale figure dressed in black rode in and saved him. Bran later recognized him as his uncle Benjen Stark, who hadn’t been seen since season 1. The White Walkers stabbed him, but the children of the forest put dragonglass in his heart to stop him from turning. Although Benjen doesn’t appear to be Coldhands in the books, he returns as the Coldhands-like figure for the show.

“The Wall is not just ice and stone,” Benjen said. “Ancient spells were carved into its foundations. Strong magic to protect men from what lies beyond. And while it stands, the dead cannot pass. I cannot pass.”

The Wall has withstood the test of time, but as the Night King approaches, the question of whether it can be taken down is more vital than ever.

In Martin’s books, there is a legendary horn called the Horn of Winter (or the Horn of Joramun, named after the first King-Beyond-the-Wall) that reportedly would wake “the giants from the earth” and bring down the Wall. Mance Rayder claimed to have it during the Battle of Castle Black and threatened to order Tormund Giantsbane to blow it if the Night’s Watch didn’t allow the wildings to pass through the Wall. The horn burns in a pyre, but Tormund later reveals it was a fake.

However, some fans believe that the horn has been hiding in plain sight the entire time. An old warhorn is discovered with spears and arrowheads made of dragonglass at the Fist of the First Men in season 2. The warhorn doesn’t appear to have played any role since—and the Horn of Winter as a legend doesn’t exist in the show—but considering we’ve seen old weapons reappear before, there’s always the smallest of possibilities it could return.

Others suspect that the mark on Bran’s arm from the Night King, which brought down the protections surrounding the Three-Eyed Raven’s cave, could also remove the Wall’s protections. It’s a sound theory, but one we haven’t been able to test in part because we haven’t seen the Wall since Bran and Meera crossed it in the season 7 premiere. And we can’t imagine either Bran or Meera keeping that news to themselves after arriving in Winterfell so if Bran’s mark has anything to do with it, it’s not the only piece of the puzzle.

So far this season we’ve been kept in the dark about the Night King’s plan aside from what we hear in the preview. He’s got an Army of the Dead that can grow with more “recruits,” and time and winter are on his side. One way or another, he’s going to try getting through.

The question is, will he take the Wall down with him when he does?