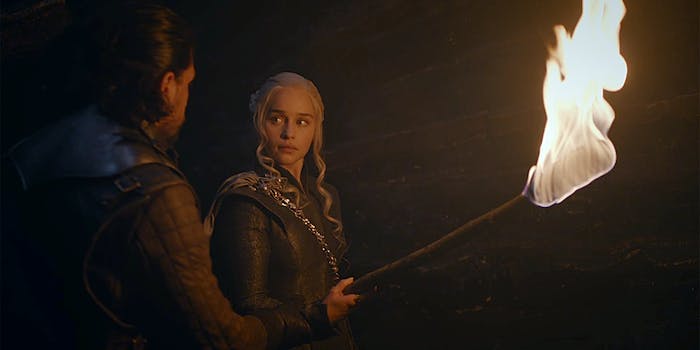 What’s with those ancient spiral symbols on ‘Game of Thrones’?

The alliance that stopped the Long Night.

Warning: This article contains spoilers from Game of Thrones seasons 7 and 8.

As Tyrion Lannister reminded Jon Snow when the two met again on Game of Thrones, getting Daenerys Targaryen to trust Jon’s word about the seemingly fantastical Night King was always going to be an uphill battle. But if Jon’s word alone couldn’t do it, perhaps cave carvings thousands of years old might do the trick.

Although Dany allowed Jon to mine dragonglass from Dragonstone, it wasn’t really because she believed him. She just wanted him to stay out of her way (and distracted) while she put her plan to take the Seven Kingdoms in action. Before Jon starts the mining process, he decides to show Dany what’s been hidden beneath her ancestral homeland this entire time.

Hidden deep in the cave are ancient cave carvings depicting the Children of the Forest and their alliance with the First Men to defeat the White Walkers and the Night King, whose crown-like head is prominently featured in one of the carvings.

“They fought together against their common enemy,” he explained. “Despite their differences, despite their suspicions. Together. We need to do the same if we’re gonna survive. Because the enemy is real. It’s always been real.”

The ancient symbols of enemies

The circles depicted in the caves of Dragonstone by the Children of the Forest tell a story thousands of years old, but it’s not the first time we’ve seen the ancient symbols them on the show. For many seasons, they appeared to be a calling card of the enemy.

In Game of Thrones’ very first episode, a brother of the Night’s Watch discovers a number of dead wildlings chopped to pieces and displayed in a strange fashion, as if someone had placed them. He alerts two other brothers traveling with him, but by the time they return, all of the wildlings are gone. A White Walker is there waiting for them and kills two of the men while the third flees south. He is later executed by Ned Stark for abandoning the Night’s Watch.

A couple of seasons later, Jon arrived at the Fist of the First Men with Mance, Tormund Giantsbane, and Ygritte when they encountered dead horses arranged in a circular spiral. The human bodies had all disappeared.

“Always the artists,” Mance says as the camera zooms out to reveal what they’re standing in.

And although no bodies were involved, ice spikes circled the mantle on which one White Walker placed one of Craster’s sons before the Night King turned him.

It’s not until the season 6 episode “The Door” that we learn the symbol has something to do with the Children of the Forest. In a vision, Bran Stark and the Three-Eyed Raven witness the creation of the White Walkers at the Children’s hand. An overview shot reveals a spiral of stone surrounding a weirwood tree—presumably the one where Bran, Meera, Hodor, and Summer resided for more than a season. The Children of the Forest used them in a ritual to turn one of the First Men into a White Walker, so it makes sense that the White Walkers would use these symbols as well.

What do the spirals mean? We’re not exactly sure because they appear to be more of a show invention than something taken from the books—where the creation of the White Walkers has yet to be revealed. But considering how often they appear, they’re bound to be important.

“These are patterns that have mystical significance for the Children of the Forest,” Game of Thrones showrunner David Benioff explained. “We’re not sure exactly what they signify, but spiral patterns are important in a lot of different cultures in our world, and it makes sense that they would be in this world as well.”

They fought together against their common enemy

Although Leaf and the other Children of the Forest originally created the White Walkers to fight men, they eventually had to ally with men to stop their icy creations.

The wars between the Children of the Forest and the First Men spanned thousands of years after the First Men settled in Westeros, which occurred approximately 8,000 to 12,000 years ago. The Children didn’t like that the First Men chopped down and harvested their trees—especially weirwood trees—while the First Men thought the Children were spying on them through the trees. It got ugly as fighting spanned across all parts of Westeros, resulting in some of the landmarks known to Westeros today, as well as the destruction of the Arm of Dorne, which used to bridge Westeros and Essos together.

Eventually, the Children of the Forest and the First Men came together and agreed to a pact: The First Men would get to live on open land while the Children lived in the forest. The Children also taught the First Men about the old gods, who planted weirwood trees near their castles. Although many of the weirwood trees down south have since been chopped down, some still remain in places like King’s Landing so that those who worship the old gods can pray and worship there. The Children also assisted Bran the Builder, a legendary and ancient Stark ancestor who is said to have built the Wall, which is embedded with magic.

The Long Night and history repeating itself

Although the Long Night is often mentioned in relation to Azor Ahai and the last hero (who may be the same person), carvings from the Children of the Forest suggest that their alliance with the First Men was a vital part of what drove the White Walkers back to the depths of the far north. According to legend, the last hero traveled far north to speak with the Children of the Forest, and they fought together in the Battle for the Dawn that forced the White Walkers to retreat far north. The White Walkers stayed there for thousands of years—until now.

Those legends don’t mention Dragonstone or the cave where Jon and Dany discovered those carvings, but perhaps the Children had the foresight—for some of them are greenseers—to leave a message where people would look for dragonglass to defeat the White Walkers once and for all.

Even with a mine full of dragonglass, Jon can’t defeat the army of the dead alone. Dany agrees to help Jon fight their common enemy—if he bends the knee. She’s channeling Jon from season 5 when he asks Mance Rayder if his pride is more important than the survival of his people, but unlike Mance, Jon might end up kneeling sooner than Mance ever did. (Which is to say, never.) But if two warring races can band together despite everything that’s happened between them, it should be simple for two houses to do the same.

The Night King fashions himself an artist

As the Night King marches south of the Wall in Game of Thrones season 8, he’s ramping up his artistic endeavors even further. In the season 8 premiere, titled “Winterfell,” Tormund Giantsbane, Beric Dondarrion, and Eddison Tollett stumbled upon the body of Ned Umber at the Last Hearth, the ancestral seat of House Umber. Not only did poor young Ned not get to bring his men back down to Winterfell like he promised Jon Snow, but he was also used as a tool by the Night King.

The scene is evoking a similar one from the pilot, which is meant to disturb and terrify us. And it does when Ned wakes up as a wight. Although Beric makes quick work of the wight Ned, the message couldn’t be any clearer: The Army of the Dead is marching south.