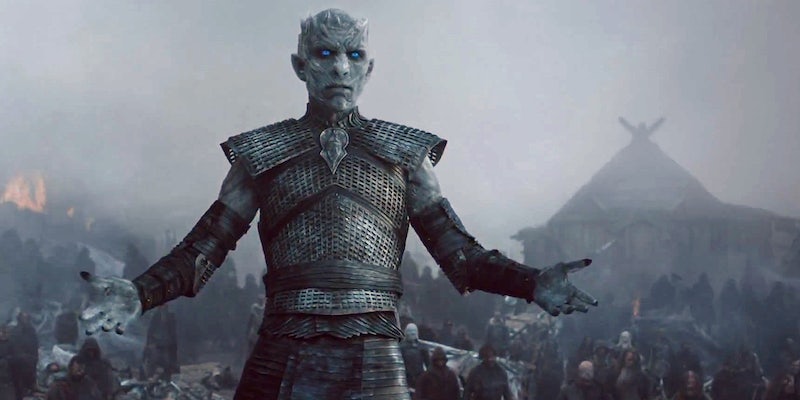 Jon Snow confirmed a 'Game of Thrones' theory with his latest kill.

Winter is here, and if Hardhome is any indication it’s absolutely terrifying.

Sunday’s episode of Game of Thrones saw Jon Snow, Tormund Giantsbane, Dolorous Edd, and a number of Night’s Watch brothers and wildlings travel to the mysterious wildling town to bring the wildlings who’d agree to fight with them below the Wall. Some of them resisted, of course, holding onto their stubbornness, but an attack by the White Walkers and wights changed everything.

“This isn’t a battle, really,” Game of Thrones writer David Benioff said of Hardhome. “This is a massacre.”

It’s clear that none of the squabbles down south about who should sit on the Iron Throne matter. This is the true threat to Westeros, and hardly anybody realizes it save for some of the Night’s Watch and Stannis Baratheon.

In A Feast for Crows, Samwell Tarly comes across an old story about the Long Night where the hero stabbed the Others (what the White Walkers are called in the books) with “dragonsteel.” Both he and Jon thought it was another name for Valyrian steel, which has now been confirmed in the show.

Jon gave a hollow laugh in that same scene when he suggested asking all of the great families for their Valyrian steel swords and heirlooms, which are in limited supply since the art of making such steel is lost. He knows it won’t ever happen, even if he is able to convince everyone the threat is real. For the first time since we saw Sam kill a White Walker with dragonglass, the Night’s Watch has an effective weapon on its side.

But as Jon saw, it was only a minor victory—if you could even call it that. The Night’s Watch and the wildlings were both outnumbered by the wights and had to retreat, but not before witnessing the Night’s King raise all of the men, women, and children who just died into wights just by raising his arms.

As I discussed last year, the Night’s King is shrouded in myth, and with his presence came a 13-year reign of dark terror, according to legend. Now he’s back in what looks to be Westeros’s worst winter in centuries, and well, let’s just say that look he gave Jon Snow, the man who threw a wrench in his plans and killed one of his own, is rather discomforting.

Are we free of Hardhome for now? Based on the last shot and the episode preview for “The Dance of Dragons,” yes. But he doesn’t seem like the kind to forget and with thousands of new wights by his side, the next confrontation between the living and the army of the dead will be even more deadly for everyone.