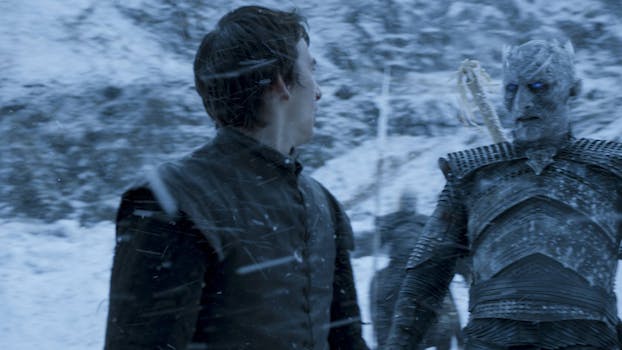 The latest ‘Game of Thrones’ twists have changed everything

Thousands of years of history and time-travel have brought us to this.

Warning: This article contains major spoilers for the latest Game of Thrones episode, “The Door.”

We knew that the happier moments on Game of Thrones last week wouldn’t last forever—and now that the rug has been lifted from fans’ feet, the implications are greater than anything we could’ve imagined.

Bran Stark’s discovery that his words were wind to a younger version of his father made both viewers and the Three-Eyed Raven rather uneasy in “Oathbreaker,” and now we’ve learned just what kind of consequences can come from meddling with time in “The Door,” which leaked after it was accidentally released early by HBO Nordic Saturday night. On one end, his solo stroll in the weirwood tree made him a marked man by the Night’s King, brought the White Walkers to where they were hidden with magic, and the ensuing fight resulted in the deaths of Summer, a Child of the Forest, the Three-Eyed Raven, and possibly even Hodor.

On the other, we finally got tons of information that fans have been wondering for years. For one, we learned why Hodor says “Hodor” in a twisted and heartbreaking ending. And on the other, we now know how the White Walkers came to be—and even more of what they’re capable of.

With all of the twists, time travel, and turns involved, this was a perfect episode for Lost veteran Jack Bender to direct.

And for everyone else in Westeros, the ramifications are huge.

On the White Walker origins

For both book readers and show viewers, the White Walkers (which are called Others in A Song of Ice and Fire) are a source of great mystery. They first appeared more than 8,000 years before Aegon’s Conquest—which occurred 300 years before the start of Game of Thrones—whose presence led to the Long Night, a winter that lasted a generation across Westeros, until the White Walkers were defeated at the Battle for the Dawn. In that battle the Last Hero (also known as Azor Ahai and the Prince That Was Promised) brought the First Men and the Children of the Forest together to fight the Night’s King, the 13th Lord Commander who, according to legend, enacted a 13-year reign of terror on the Night’s Watch and wildlings and even sacrificed some of them to the White Walkers. (George R.R. Martin has said that the Night’s King in the show isn’t the same one as the legend.)

For more, Alt Shift X has a detailed and expansive explainer on everything we know about the White Walkers.

But their origins have always been unknown, which is understandable given that most people don’t even know they exist. At least until now.

It’s Game of Thrones’s Age of Ultron moment: the Children of the Forest created the White Walkers from a man in order to protect the weirwood trees from the First Men who wanted to chop them down. But that didn’t turn out too well: The Children of the Forest eventually teamed with the First Men, the human race they had once fought, to fight against them. When Bran confronted Leaf about it, she defended the decision.

“We were at war,” she explained. “We were being slaughtered. Our sacred trees cut down. We needed to defend ourselves.”

“From whom?” Bran asked her.

Although it has yet to be confirmed in ASOIAF, Martin hinted at a possible relationship between the children of the forest and the White Walkers in a 2012 interview. If the Children had indeed created the White Walkers like in the show, that’d certainly do it.

Interviewer: Is there a closer relationship between the children of the forest and the Others than there might seem to be?

Martin: Possibly. It’s a topic that will be developing as the story continues, and so I can’t say much more right now.

And we’ve seen for ourselves what the creation of a White Walker looks like back in season 4 with one of Craster’s sons.

The theory dates back at least three years, although some played with the idea that the White Walkers were actually once the Children of the Forest corrupted with magic and power, mirroring J.R.R. Tolkien’s creation of Orcs from fallen Elves.

“Who would be motivated and capable of creating the Others? Basically only the Children of the Forest to stop the invasion of men,” one redditor wrote. “Why would the Children of the Forest help the First Men during the Long Night? Either the stories are not reliable and the time is mixed up or the Others went rogue and/or turned on their masters.”

After the Battle of the Dawn, the White Walkers all but disappeared until the beginning of the show. So what changed?

For one, some believe that the Battle of the Dawn wasn’t an actual battle but rather a broker of peace between the White Walkers, the Children of the Forest, and the First Men, and that men somehow broke some of the treaty’s terms. It’s a long-encompassing theory taking into account thousands of years of history, the circumstances Jon Snow and Daenerys Targaryen bring in, and hope for a victory, no matter how bittersweet that ending will be.

And unless the Children of the Forest are able to forge another alliance with men, women, dragons, and maybe even a Prince That Was Promised, everyone is screwed.

And we thought we had it bad when Smalljon Umber brought Shaggydog’s head as a gift to Ramsay Bolton.

Summer’s death makes Ghost and Nymeria the last two living direwolves, but in the final moments of the episode—as Hodor is being ripped apart—we learn the true meaning of Hodor.

Bran brought the White Walkers and wights straight to the Three-Eyed Raven’s doorsteps—and when the White Walkers arrive, they’re both deep in a vision of watching Ned leave for the Vale. Meera shouts at Bran through the vision to warg into Hodor, which he does, and Hodor helps them escape. But then a younger Hodor hears Meera’s shouts through Bran’s vision to “hold the door,” resulting in a seizure. Younger Hodor shouts “hold the door” until it turns into “Hodor” while Bran helplessly watches from within the vision. Hodor is ripped apart as Meera and Bran escape.

Fan speculation a few weeks ago was spot-on on at least one aspect: It had to do with some warging gone wrong. But they managed to get another part of it right, even though it was part of an entirely more tinfoil-heavy theory from at least three years ago.

Basically fans believed that Hodor was Aegon Targaryen, Rhaegar Targaryen and Elia Martell’s youngest child. There are already theories that Aegon, who appears in A Dance With Dragons, is not legitimate, but this one takes it a step further. Hodor was smuggled out of King’s Landing after Mad King Aerys fell and raised by Old Nan—but not before the Mountain threw him against a door. Hodor comes from “Hold the door,” but it’s shouted by Elia Martell instead, before she died. But it was never a theory people took too seriously.

Of course the show’s own timeline disproves this and Aegon has yet to show up in Game of Thrones. But it’s far from the most far-fetched idea we’ve heard from this series.

Let’s pour one out for Hodor, who gave up his life to save those he cared for—even if one of them was the reason he could now only say Hodor.