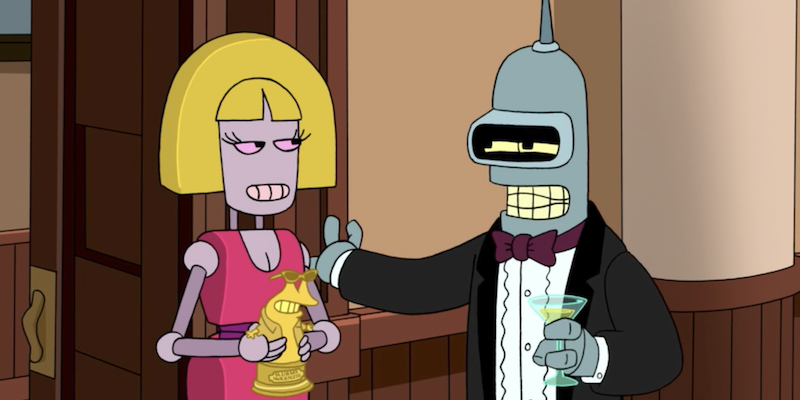 Even if you binge-watch 'Futurama,' there are still mysteries to discover about Planet Express' grumpiest employee.

Bender Bending Rodriguez may be a fictional robot from a canceled sci-fi cartoon show, but to fans, he’s so much more than that. This misanthropic, lovable antihero has anger issues and every sort of vice, but under the filth is a heart of gold. Before you start your next binge-watch of Futurama, take a gander at these fascinating facts about Bender.

10 things you never knew about Bender

1) It’s canon that Bender is a Mac

In the season 1 finale, the Planet Express crew takes a tour of the Slurm Factory where we get to see them hang out with good ole’ Slurms McKenzie. Earlier in the episode, Professor Farnsworth scans Bender with a new device called an F-Ray, whereupon we discover that our dear friend Bender is powered by a 6502 microprocessor, the same processor that was used to power the Apple II. In an interview with Vulture, writer David X. Cohen explained why. “This is straight from me,” Cohen said. “When I was in high school, I spent many of my teen years until five in the morning programming video games of my own invention, so I became extremely and intimately familiar with this chip. It ran at 1 MHz—we’re used to hearing GHz nowadays—and so you had to be a nimble programmer to get it to do what you wanted it to do.”

2) Apple was all over Bender’s funeral

In season 7’s “Forty Percent Leadbelly,” the world briefly believes Bender has been killed by a train. Apple funded Bender’s funeral, though apparently in the future, the company barters for ad space. During the funeral, folk artist Silicon Red sings Bender a Mac-themed eulogy, including the lyrics:

3) Bender has a John Hughes connection

Bender was named after John Bender from The Breakfast Club. Played by Judd Nelson, John Bender was a tough bully from the wrong side of the tracks who hid a soft and sensitive side underneath his gruff demeanor. We have no idea how that inspired Bender.

4) Bender’s antenna is a multitool

Bender’s antenna is more than just a transmitter. Over the course of the series it has been a beer tap, a popcorn butter pump, a flusher, a snooze button, a timer, a voice mail notification system, a voicemail deletion button, an audio tape dispenser, a pager, an unintentional cable signal blocker, and a timer for Bender’s internal digital camera.

Bender was built in the year 2996 in Tijuana, Mexico, by Momcorp, and he came off the assembly line as an adorable little tyke, though one with attitude. His first words as a baby were, “Bite my shiny metal ass,” spoken as he enjoyed his first beer.

Unlike other robots, Bender does not have a backup unit to house his data in case his body is destroyed. Momcorp saw this as a defect and had Bender ordered to be destroyed, but he was saved by Hermes. This also means if his hard drive is destroyed, he will die once and for all.

7) Despite being born in 2996, Bender is one of the oldest beings on Earth

In the movie “Bender’s Big Score,” we learn that Bender is actually millions of years old thanks to his use of the Time Sphere. Time travel through the Time Sphere is one way, so each time Bender is sent back in time he’s forced to wait thousands of years in the limestone cave under Planet Express. There is no exact accounting of how old Bender currently is on the show.

8) Bender has a soul

Although he lacks a backup unit, Bender apparently does have a soul. In “Ghosts in the Machines,” he is killed by Lynn, an ex-girlfriend and suicide booth. His ghost haunts the Earth, only able to communicate by possessing other robots until he proves himself worthy of resurrection by saving Fry’s life. Apparently, his soul left his body without his hard drive being destroyed. At least he had fun as a ghost.

Although his character is known for a wide range of profanity, it isn’t until “War is the H-word” that we officially learn Bender’s most frequently uttered words. They are: