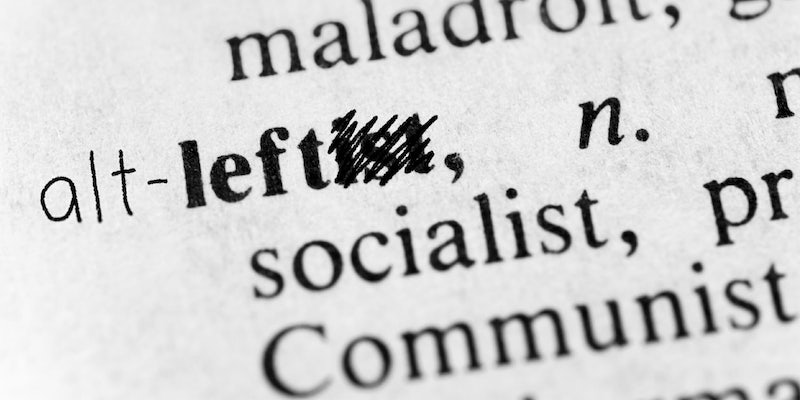 There is no equivalency between alt-right and alt-left.

On Tuesday, President Donald Trump launched a passionate defense of white supremacists who attended a rally in Charlottesville, Virginia, arguing that there was blame to be found on “both sides.”

Trump, who made the remarks during a press conference that at times became hostile, attempted to shift some of the blame to what he called the “alt-left.” For many people, it was the first time they’d heard the phrase used—at least from someone of Trump’s stature.

The idea of trying to create an “alt-left” to compare to the much-criticized “alt-right” likely makes sense from Trump’s apparent perspective. It creates an equal foil to share the blame of the shocking violence in Charlottesville. But is there really such a thing as the alt-left?

There’s no such thing as the alt-left. To understand why, you first need to understand the extremist movement within the Republican party.

The idea of the alt-right is largely credited to Richard Spencer, a white nationalist. The so-called alt-right became a force in the Republican Party and overwhelmingly supported Trump in his quest to be president. The term alt-right took hold in the late 2000s, shortly after President Barack Obama took office.

Here’s what the Southern Poverty Law Center, which has extensively tracked the movement over the years, defines the alt-right as:

The Alt-Right is a loose set of far-right ideologies at the core of which is a belief that “white identity” is under attack through policies prioritizing multiculturalism, political correctness and social justice, and must be preserved, usually through white-identified online communities and physical ethno-states.

The group found its identity on the internet and was cultivated websites such as neo-Nazi outlet the Daily Stormer and Breitbart News, the website formerly run by Trump adviser Steve Bannon.

How is the alt-right different from the alt-left?

There is no equivalent organized movement on the left that espouses extremist views comparable to those held by members of the alt-right. Instead, the idea of the alt-left is frequently used by far-right Fox News pundit Sean Hannity to describe more radical liberals and Trump opponents.

Also, unlike the alt-right, alt-left wasn’t coined by members of the movement, but rather, it’s used as an insult against people who oppose far-right ideologies.

Oren Segal, the director of the Anti-Defamation League’s Center on Extremism, told CNN that the idea of an alt-left is a “made-up term.”

While there are radical members of the left, the idea of an alt-left is incorrectly conflated with the “antifa” (anti-fascist) movement—members of which have been seen at protests at Trump’s inauguration and other events.

Antifa, which sits on the extreme far-left of the political spectrum, is a decentralized network of people from varying degrees of political leanings. Their goal is to oppose what they see as fascist elements in society, including the alt-right. Antifa activists have at times engaged in violence, which has made them a villain in the eyes of some right-leaning groups and a thorn in the heel of many Democrats, who do not want to be associated with their more provocative methods and do not appreciate the black cloud the group puts over otherwise peaceful protests.

Antifa does not hold cohesive political views beyond opposing fascism, which makes it far different from the alt-right’s pro-white, bigoted platform.

Why would Trump want you to think there is an alt-left?

Essentially, Trump is trying to create a foil for the alt-right—where many of his most vehement supporters have planted their flag.

By trying to create the idea of a just-as-radical side on the left, it lends credence to his argument that there is blame on “both sides” for the violence that erupted in Charlottesville. Also, it’s an easy way to charge up supporters.

On Tuesday night, Hannity backed up Trump’s statements during his press conference by continuing to push the alt-left narrative, implying that the counterprotesters in Charlottesville were part of the alt-left.

“The people that provoked this, yeah I’ll agree, they were white supremacists, they are the ones who are most responsible,” Hannity said. “This brings out a morally justifiable anger in people—people who are that ignorant. But it does not give these alt-left protesters, doesn’t give people of good conscious even, the right to attack them, punch them, hit them, et cetera.”

Is this unfounded alt-left push working?

Yes. The term has begun spreading among those who have spoken out in support of Trump or the alt-right. Here are some examples:

Given how powerful the term is in creating a false equivalency between the alt-right and fringe extremists on the far left, you can expect to hear much more about the alt-left in the future. Just remember: It doesn’t really exist.