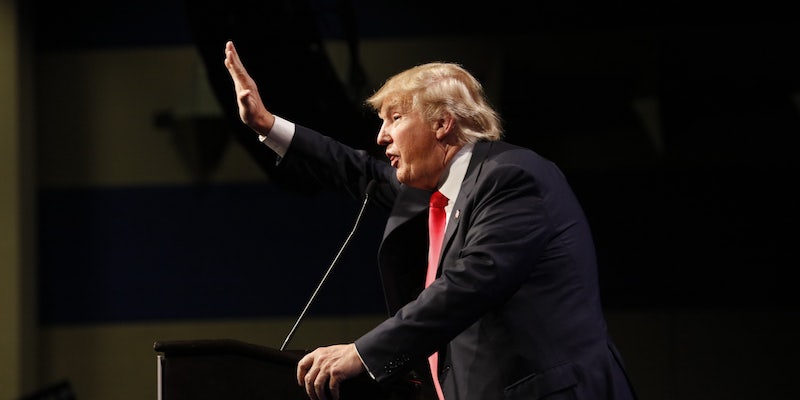 Fascism may not mean what you think.

In the current political climate, a particular word is often thrown around in places it may not completely belong: fascism.

Immediately, what usually comes to mind is Adolf Hitler, the Third Reich, and the Holocaust. Some readers may be picturing Donald Trump and his less-than-diplomatic governing style. There are an infinite number of options here because “fascism” tends to evoke a slew of historical comparatives.

That doesn’t make Trump fascist, though.

Robert Paxton, professor emeritus at Columbia University and author of Anatomy of Fascism,” thinks many people associate anything close to tyrannical with fascism.

“To have real fascism you have to have extreme intolerance, like on the brink of murdering minorities,” Paxton tells the Daily Dot. “There is a doctrine that the nation has to be purified, and to achieve that you must accept a very high degree of police power and a leader who claims to speak for the population and carry out the national will. But, as a matter of fact, they’re setting up a personal dictatorship.”

Fascism is a dictatorial ruling style designed by Benito Mussolini in Italy and co-opted by Adolf Hitler in Germany in the early half of the 20th century. The ideology calls liberal democracy useless and demands a strong totalitarian figure to lead the nation into perfect unity and economic stability through giving up rights, and thrives off of emotion and holding feelings over truth.

Populism, as opposed to outright fascism, is what Paxton believes is more prevalent in our society. A populist society emerges when the so-called elites fail to run the state, so a self-proclaimed leader for the people rises to become to become the sole voice of the people. The danger of populism, Paxton says, is its inclination to turn monolithic and violent against dissent—or even to turn into fascism.

Paxton argues that certain elements of fascism exist in our current society—such as the demonization of minorities, strong-arm foreign policy, and nationalist chants—but the major foundations of fascism are still missing—such as territorial conquest, strict economic regulations, and full dismantling of the free press. However, that doesn’t mean we can turn a blind eye to what is already there.

“I think Mr. Trump is very skillful in accusing Obama of sort of weakening America and creating this language of decline as an echo [of fascism],” Paxton says. “And then the remedy to the ‘decline’ is stronger authority, getting rid of the enemies, and the like.”

Is Donald Trump a fascist?

Due to the creation of this echo, Paxton stresses, it’s important to look out for other “red flags” of fascism and to immediately resist those actions or tactics.

The question is, how do we resist them? Better yet, how do we try to prevent them?

Timothy Snyder, professor of history at Yale, has studied tyranny and fascism extensively, and he recently published a book on the topic, On Tyranny: Twenty Lessons from the Twentieth Century.

Snyder’s book offers 20 “lessons” of how to react to progressing fascism, and, hopefully, stop it in its tracks. Fittingly, each lesson is progressively more urgent and serious. Lesson one alone is easier said than done: Do not obey in advance.

In his book, Snyder puts it plainly: Anticipatory obedience is a political tragedy. By preemptively obeying the government—that is, automatically normalizing and trusting anything from what we perceive as authority—it’s easy to do really bad things just because you were told to.

“If a terrorist attack happens—there very likely will be over the course of four years—that’s the moment when Americans have to mobilize, not against some other group, but in defense of their own constitutional rights,” Snyder tells the Daily Dot. “That’s a historical lesson, because we know that’s how fascism resolves its power. If something does blow up—God forbid—the way to react is not to let the government rule you into accepting authoritarianism.”

‘It doesn’t have to be fascism to be awful’

According to Snyder, fascism doesn’t have to make sense since it’s based on emotion and the idea that truth can be whatever feels right. Citizens can easily be sucked into this because it’s very appealing to have leaders tell you exactly what you want to hear.

That point alone may set off some alarms about White House adviser Kellyanne Conway‘s ‘alternative facts‘ and Press Secretary Sean Spicer saying it’s OK to “disagree with the facts,” or even Trump’s never-ending “war” on so-called “fake news.” Don’t be so quick to call it a fascist takeover, though.

Like Paxton, Snyder doesn’t view Trump as a fascist, but he still calls for citizens to remain vigilant.

“One of the dangers in the American conversation is that people say if it’s not X it’s not a big deal,” Snyder says. “It doesn’t have to get there before it would already be unspeakably bad… It doesn’t have to be fascism to be awful.”

Snyder says, while it’s important to look back at history to learn more about the present and how to react to it, history doesn’t necessarily repeat itself. Though America isn’t struggling with a fascist takeover right now, Snyder is still happy “fascism” is a part of the national conversation. However, he hopes other possibilities aside from the F-word are taken into consideration and discussed.

It’s crucial to keep an eye out for any signs of tyranny or dictatorship, but not all of the focus needs to be on fascism alone. It’s important to also break down oligarchy, authoritarianism, totalitarianism, and kleptocracy—other governmental structures that challenge the integrity of democracy—according to both Snyder and Paxton.

Any signs that a single person or group is obtaining unchecked power or that constitutional rights are at risk calls for immediate action.