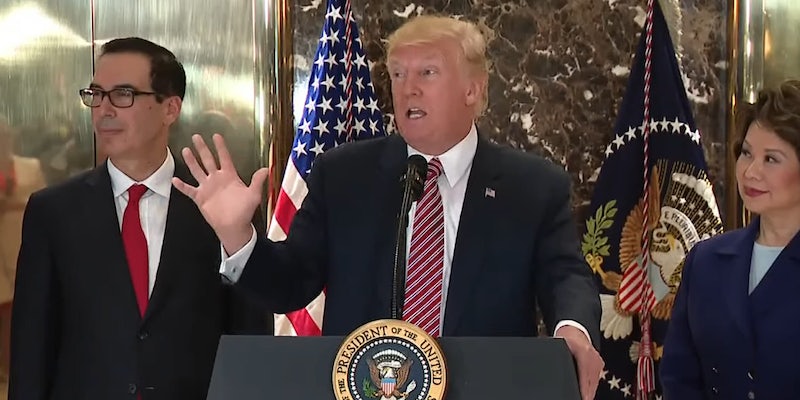 Trump continued to say both sides were responsible for the violence that unfolded.

President Donald Trump condemned “both sides” for the violence that erupted in Charlottesville, Virginia, over the weekend that was sparked by a white nationalist rally.

Trump made the remarks at a press conference called to talk about infrastructure, but it quickly devolved into a shouting match as Trump appeared frustrated and angry when reporters asked him about his much-criticized response to the violence over the weekend. The remarks on Tuesday seemed to contradict the ones he made on Monday.

“What about the alt-left that came charging at the, as you say, alt-right—do they have any semblance of guilt?” Trump said, echoing talking points from Fox News’ Sean Hannity. “As far as I’m concerned, that was a horrible, horrible day … you had a group one side that was bad, and you had a group on the other side that was also very violent—and nobody wants to say that, but I’ll say that right now.”

Trump also went on to say both the counterprotesters and white nationalists groups who clashed in Charlottesville included “very fine people.”

“I think there is blame on both sides, and I have no doubt about it,” Trump said, his voice cracking as he got louder.

Pres. Trump on Charlottesville: "There's blame on both sides…you also had people that were very fine people on both sides." pic.twitter.com/ayX9eHABsN

As the press conference continued, Trump compared America’s Founding Fathers George Washington and Thomas Jefferson to Robert E. Lee, the Confederate leader whose stature was at the center of the white nationalist rally in Charlottesville, adding that taking down statues was “changing history” and “changing culture.”

“Many of those people were there to protest the taking down of the statue of Robert E. Lee,” Trump said, again echoing Fox News. “This week, it is Robert E. Lee and this week, Stonewall Jackson. Is it George Washington next? You have to ask yourself, where does it stop?”

Trump said there were “other people in that group” other than white nationalists and neo-Nazis who were treated “absolutely unfairly.”

During the press conference, Trump also spoke about his adviser Steve Bannon, bashed the “fake news” media, and said he waited until Monday to make a second statement about Charlottesville to make sure he got his “statement was correct.”

“Before I make a statement,” Trump said, “I like to know the facts.”

You can watch all of the chaotic press conference here: