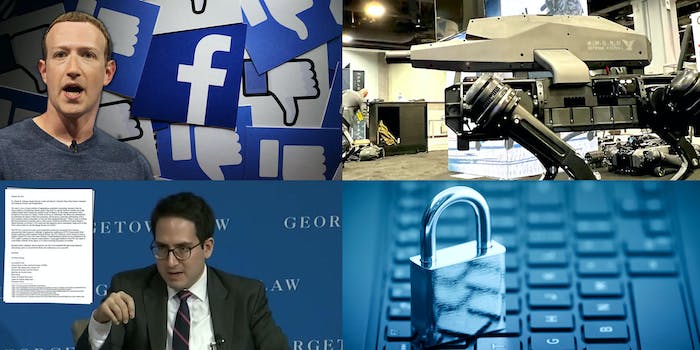 Here's a look at tech and politics news from the last week.

A collection of more than 40 human rights, internet rights, and public interest groups are calling on Congress to pass data privacy legislation and investigate Facebook in the wake of a whistleblower testifying before a Senate committee.

The groups launched HowToStopFacebook.org. The website uses the recent testimony of Frances Haugen as a springboard to urge members of Congress to “finally pass a real data privacy law for the United States.”

Frances Haugen, a former product manager at Facebook, testified before the Senate Commerce Committee subcommittee earlier this month. Several members of Congress said Haugen’s testimony could be a catalyst for passing legislation.

The website—which was created by groups including Fight for the Future, Accountable Tech, MediaJustice, Public Knowledge, the Center for Digital Democracy, and numerous others—has a petition for people to sign.

The petition tells lawmakers a federal data privacy law “is a clear step that you can take right now to stop Facebook from causing more harm, and to make all social media and the internet a better, safer place that enhances our democracy and where our rights are protected.”

Specifically, the groups are urging Congress to pass a law that would make it illegal for big tech giants like Facebook and YouTube to collect data that they use to power their recommendation algorithms.

“The enormous amount of data that these companies harvest about all of us is the fuel supply that powers these harmful algorithms,” Evan Greer, the director of Fight for the Future, said.

The internet is fraught with lies and cynical content posing as news. Luckily, 1440 scours more than 100 trusted sources to bring you the best in culture, science, sports, politics, and more, all in a digestible five-minute read. Join free, and get the best in internet journalism delivered to your inbox every day.

Well, they finally strapped a sniper rifle to a robot dog

A robotics company has stirred controversy online after attaching a sniper rifle to the back of a robot dog.

In a tweet, Ghost Robotics shared an image of the armed robot on display at a recent conference for defense contractors in Washington, D.C.

Ghost Robotics, which refers to the creation as the Quadrupedal Unmanned Ground Vehicle, or Q-UGV, teamed up with the self-described “warfighter solutions company” known as S.W.O.R.D. Defense Systems to convert the robot into a lethal weapon.

In a description on its website, S.W.O.R.D. Defense Systems argues that the rifle “is the future of unmanned weapon systems.”

Users on Twitter responded largely with anger to the arming of the robot, which has long been a fear among the public since robotic dogs first emerged.

“So you’ve done some fancy stepping to avoid saying the quiet part out loud. Let me do it for you,” one user wrote. “We created a soulless piece of hardware for brutal population suppression when the billionaires finally fear for their ill-gotten gains.”

Although some robot producers such as Boston Dynamics have made efforts to disassociate their creations from apocalyptic themes, even going as far as to condemn an art show in February that saw a paintball gun attached to their robot dog, the technology will undoubtedly be increasingly utilized by police and military.

Bedoya, the founder and director of Georgetown University Law Center’s Center on Privacy & Technology, was tapped by President Joe Biden to be a commissioner at the FTC in September.

Biden’s choice of Bedoya was immediately hailed by advocacy groups, who highlighted his work regarding civil rights and surveillance.

In a letter sent to Senate Majority Leader Chuck Schumer (D-N.Y.) and Sen. Maria Cantwell (D-Wash.), the chair of the Senate Commerce Committee, 37 groups urged them to confirm Bedoya “swiftly” and noted that he has “shown a particular understanding of how these companies impact communities of color and other marginalized groups.”

The FTC was left in a 2-2 deadlock after Rohit Chopra, a former commissioner, was confirmed to be the director of the Consumer Financial Protection Bureau. Bedoya would replace Chopra on the commission.

The letter says the recent testimony from Frances Haugen, a Facebook whistleblower, “made clear that regulators need to immediately clamp down on big tech’s abusive behavior.” By having Bedoya confirmed swiftly, the Senate could avoid a “prolonged deadlock” that “only stands to create further obstacles for the agency as it works to hold big tech giants accountable.”

The letter was signed by numerous groups including Demand Progress, Accountable Tech, the Center for Digital Democracy, the Electronic Frontier Foundation, Fight for the Future, MediaJustice, Public Knowledge, 18 Million Rising, and many others.