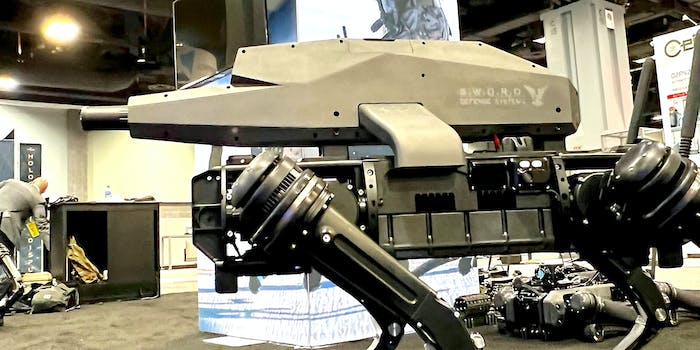 Well, they finally strapped a sniper rifle to a robot dog

A robotics company has put a sniper rifle on a quadrupedal robot dog.

A robotics company has stirred controversy online after attaching a sniper rifle to the back of a robot dog.

In a tweet earlier this week, Ghost Robotics shared an image of the armed robot on display at a recent conference for defense contractors in Washington, D.C.

Ghost Robotics, which refers to the creation as the Quadrupedal Unmanned Ground Vehicle, or Q-UGV, teamed up with the self-described “warfighter solutions company” known as S.W.O.R.D. Defense Systems to convert the robot into a lethal weapon.

In a description on its website, S.W.O.R.D. Defense Systems argues that the rifle “is the future of unmanned weapon systems.”

“Chambered in 6.5 Creedmoor allows for precision fire out to 1200m, the SPUR can similarly utilize 7.62×51 NATO cartridge for ammunition availability,” the company writes. “Due to its highly capable sensors, the SPUR can operate in a magnitude of conditions, both day and night.”

Users on Twitter responded largely with anger to the arming of the robot, which has long been a fear among the public since robotic dogs first emerged.

“So you’ve done some fancy stepping to avoid saying the quiet part out loud. Let me do it for you,” one user wrote. “We created a soulless piece of hardware for brutal population suppression when the billionaires finally fear for their ill-gotten gains.”

Similar backlash rose up in April after the New York Police Department (NYPD) was seen walking the streets with another brand of robotic dog.

Although some robot producers such as Boston Dynamics have made efforts to disassociate their creations from apocalyptic themes, even going as far as to condemn an art show in February that saw a paintball gun attached to their robot dog, the technology will undoubtedly be increasingly utilized by police and military.