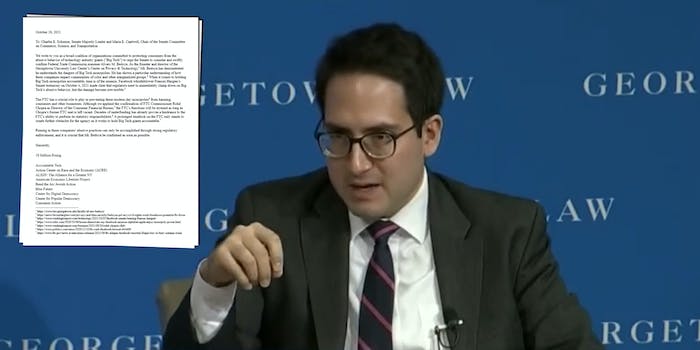 The groups said the FTC needs to be fully staffed to reign in the 'abusive practices' of big tech.

Bedoya, the founder and director of Georgetown University Law Center’s Center on Privacy & Technology, was tapped by President Joe Biden to be a commissioner at the FTC in September.

Biden’s choice of Bedoya was immediately hailed by advocacy groups, who highlighted his work regarding civil rights and surveillance.

In a letter sent to Senate Majority Leader Chuck Schumer (D-N.Y.) and Sen. Maria Cantwell (D-Wash.), the chair of the Senate Commerce Committee, 37 groups urged them to confirm Bedoya “swiftly” and noted that he has “shown a particular understanding of how these companies impact communities of color and other marginalized groups.”

The FTC—much like the Federal Communications Commission (FCC)—is currently in a deadlock because it only has four commissioners on a five-seat agency. However, unlike at the FCC, Biden has nominated Bedoya to serve as the fifth commissioner. The FTC was left in a 2-2 deadlock after Rohit Chopra, a former commissioner, was confirmed to be the director of the Consumer Financial Protection Bureau.

The letter says the recent testimony from Frances Haugen, a Facebook whistleblower, “made clear that regulators need to immediately clamp down on big tech’s abusive behavior.” By having Bedoya confirmed swiftly, the Senate could avoid a “prolonged deadlock” that “only stands to create further obstacles for the agency as it works to hold big tech giants accountable.”

“Reining in these companies’ abusive practices can only be accomplished through strong regulatory enforcement, and it is crucial that Mr. Bedoya be confirmed as soon as possible,” the letter reads.

The letter was signed by numerous groups including Demand Progress, Accountable Tech, the Center for Digital Democracy, the Electronic Frontier Foundation, Fight for the Future, MediaJustice, Public Knowledge, 18 Million Rising, and many others. You can read all of the letter here.