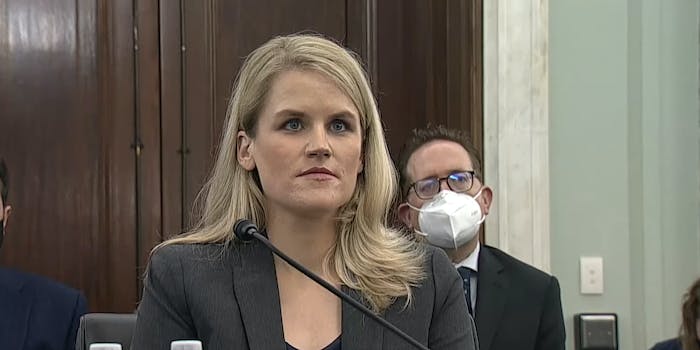 Facebook whistleblower says there is a need for more transparency

She said that the public is 'given no other option' but to take Facebook's word on 'blind faith.'

Frances Haugen, the Facebook whistleblower who came forward over the weekend, told members of Congress on Tuesday that the social media giant needed to have more transparency for meaningful regulation to happen.

Haugen, a former product manager at Facebook, testified before the Senate Commerce Committee’s consumer protection, product safety, and data security subcommittee on Tuesday. During it, lawmakers questioned Haugen about a number of issues, including the impact Facebook, Instagram, and other apps have on teenagers and problems with algorithmically amplified content.

Haugen said Facebook’s products “harm children, stoke division, and weaken our democracy” and that company won’t make changes because “they have put their astronomical profits before people.” She stressed that congressional action was needed.

During most of the hearing, Haugen stressed a need for more transparency from Facebook. At one point, she noted that the public is “given no other option” but to take Facebook’s messaging and statements on “blind faith.”

“During my time at Facebook, I came to realize a devastating truth: Almost no one outside of Facebook knows what happens inside Facebook. The company intentionally hides vital information from the public, from the U.S. government, and from governments around the world,” she said. “The documents I have provided to Congress prove Facebook has repeatedly misled the public about what its own research reveals about the safety of children, the efficacy of its artificial intelligence systems, and its role in spreading divisive and extreme messages.”

In written testimony, Haugen said a “critical starting point” for regulation was “full access to data for research not directed by Facebook. During the hearing, she likened the need for oversight to the Department of Transportation.

“This inability to see into Facebook’s actual systems and confirm that they work as communicated is like the Department of Transportation regulating cars by only watching them drive down the highway,” Haugen said during the hearing.

Haugen also suggested a regulatory agency in the government should be tasked with policing Facebook. She noted in her written testimony that “the only people in the world who are trained to analyze these experiments to understand what’s happening inside of Facebook are people who have spent time there.”

During the hearing, Sen. Brian Schatz (D-Hawaii) asked Haugen what she would do if she became the head of Facebook. Echoing her earlier remarks, she answered that she would “immediately” put together a way to share information and research with oversight bodies like Congress.

“I would give proposed legislation to Congress, saying ‘here’s what an effective oversight agency would look like.’ I would actively engage with academics to make sure people who are confirming ‘are Facebook’s marketing messages true’ have the information they need to confirm these things,” she said.