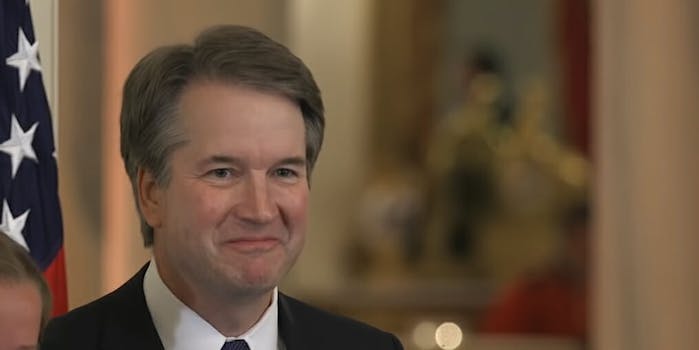 Supporters of net neutrality have joined a chorus of Americans who condemned President Donald Trump‘s pick of Judge Brett Kavanaugh to replace Justice Anthony Kennedy on the Supreme Court.

A recent dissent written by Kavanaugh, who sits on the U.S. Court of Appeals for the D.C. Circuit, concerns advocates of net neutrality protections–which ensure that all internet traffic is treated equally. In his argument, Trump’s Supreme Court pick argued that net neutrality rules, which were rescinded by the Federal Communications Commission (FCC) last year, violated the First Amendment rights of internet-service providers (ISPs), calling net neutrality “unlawful” and adding that the rules “must be vacated.”

In his argument, which was flagged by the Verge, Kavanaugh blasted the 2015 Open Internet Order, which enshrined net neutrality rules, as something that “upended the agency’s traditional light-tough regulatory approach to the internet.”

His philosophy was clear: “Rather than addressing any problem of market power, the net neutrality rule instead compels private Internet  service  providers to supply an open platform for all would-be Internet speakers,  and thereby diversify and increase the number of voices available on the Internet… The rule forcibly reduces the relative voices of some Internet service and content providers and enhances the relative voices of other Internet content providers.”

“The net neutrality rule reflects a fear that the real threat to free speech today comes from private entities such as Internet service providers, not from the Government. For that reason, some say, the Government must be able to freely intervene in the market to counteract the influence of Internet service providers.  That argument necessitates two responses. To begin with, the First Amendment is a restraint on the Government and protects private editors and speakers from Government regulation. The First Amendment protects the independent media and independent communications marketplace against Government control and overreaching.”

As Democrats in Congress attempt to use the Congressional Review Act (CRA) to overturn the FCC’s decision to rescind the rules, Sen. Chuck Schumer (D-N.Y.) pointed out Kavanaugh’s stance on net neutrality.

“Kavanaugh frequently sides with powerful interests rather than defending the rights of all Americans like when he argued that the FCC’s #NetNeutrality rule benefiting millions of consumers was unconstitutional,” the Senate minority leader wrote early last week on Twitter.

Kavanaugh frequently sides with powerful interests rather than defending the rights of all Americans like when he argued that the FCC’s #NetNeutrality rule benefiting millions of consumers was unconstitutional. https://t.co/jq3ve5pWU2

Internet rights advocacy groups have also pushed back against Kavanaugh being chosen by Trump.

Fight for the Future, which has pushed for the CRA fight in Congress, called Kavanaugh a “disaster for internet freedom” late Monday night. Similarly, Demand Progress called him an “enemy of net neutrality.”