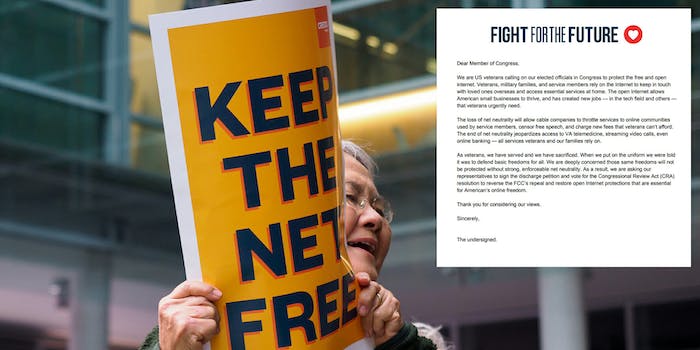 More than 1,000 veterans have signed, according to organizers.

Advocates for net neutrality are circulating an open letter from United States veterans to lawmakers that urges them to support an effort in Congress to overturn the Federal Communications Commission‘s (FCC) decision to rescind net neutrality rules.

The letter, hosted by internet rights group Fight for the Future, says net neutrality is essential for veterans keeping in touch with loved ones when serving overseas, and access “essential services at home.”

More than 1,000 veterans have signed the open letter, according to organizers, which urges lawmakers to support a Congressional Review Act (CRA) effort to restore net neutrality protections.

“As veterans, we have served and we have sacrificed,” the letter reads. “When we put on the uniform we were told it was to defend basic freedoms for all. We are deeply concerned those same freedoms will not be protected without strong, enforceable net neutrality.”

Earlier this summer the Senate passed its own CRA, pushing the onus onto the House of Representatives. The CRA needs a simple majority to pass in the House and currently 175 lawmakers have voiced support for it, leaving it 43 votes short of passing, according to a scoreboard compiled by Battle for the Net.

If successful in the House, the CRA would need to be signed by President Donald Trump.

Fight for the Future said they will continue collecting signatures on the letter in “the coming weeks” before they deliver it to lawmakers. The veterans letter is similar to one signed by small businesses across the country who are in favor of keeping net neutrality protections.

Several comments left by veterans on the letter were published by Fight for the Future. Many of them said a free and open internet was essential for them during their time serving the country.

“As a US Navy veteran who deployed from my family numerous times, I cannot emphasize enough the importance of being able to connect via the internet with loved ones at home, Robert York, a US Navy veteran, said in a statement. “Please act to repeal the FCC decision to roll back net neutrality rules and keep an open and fair internet for our service members and their family.”

Last week advocates gathered outside the offices of lawmakers and urged them to sign onto the CRA as part of a “day of advocacy.”

You can read the entire letter here.