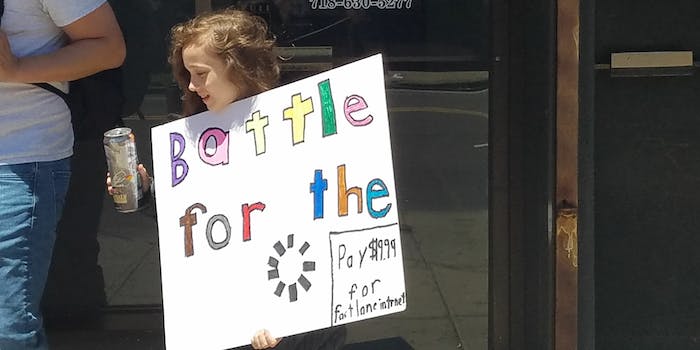 Proponents of net neutrality gathered in Washington D.C. and at congressional offices across the country on Tuesday urging lawmakers to support an effort in Congress to overturn the Federal Communications Commission‘s (FCC) decision to rescind the rules last year.

The “advocacy day” organized by internet rights groups was a multi-pronged effort to drum up support for a Congressional Review Act (CRA) resolution that is currently awaiting a vote in the House of Representatives that would essentially erase the FCC’s decision to end net neutrality. A similar CRA passed in the Senate last month, and if successful in the House—it needs just a simple majority of votes to pass—it would need to be signed by President Donald Trump.

In Washington, D.C., internet rights groups and net neutrality advocates gathered near the United States Capitol and met with representatives to urge them to support the CRA. Across the country, small gatherings took place outside of the district offices of lawmakers. As of Tuesday, 172 lawmakers in the House have voiced support for the CRA, making it 46 votes shy of passing, according to scoreboard compiled by Battle for the Net.

Evan Greer, the deputy director of Fight for the Future, said the gatherings across the country were “just the start” of the pressure they hope to put on lawmakers to support the CRA efforts.

“The key is consistency, and maintaining pressure throughout the summer,” Greer told the Daily Dot in an email.

Net neutrality advocates across the country

Similarly, Josh Tabbish, of Fight for the Future, said the group was working with small business owners in districts across the country who could advocate for net neutrality protections with their local representatives.

In Brooklyn, N.Y., a small group of net neutrality advocates protested outside of Rep. Dan Donovan’s (R-N.Y.) office for just over an hour on Tuesday afternoon.

Some advocates held signs that read “Battle for the [Loading Symbol]: Pay $19.99 for fast lane internet” and “My library was physical. My kids’ library is virtual. Keep the internet neutral.”

Jillian Schwedler and her son Nick, 13, were among those who came to Donovan’s office to show their support net neutrality and the CRA.

Nick Schwedler said he was on a school field trip when the net neutrality protections were repealed last year, after which he “came home and cried for an hour.”

Since then, he has called lawmakers to support the CRA and donated to internet rights groups, he said.

“I’m a kid who has grown up with a free and open internet,” Nick Schwedler said. “I’d like to keep it that way. I don’t want net neutrality to go down without a fight. Everything in my life revolves around the internet in one way or another.”

After an hour outside Donovan’s office, the small group was let inside by staffers. During the meeting, the group wrote a short letter to the Congressman asking him to support net neutrality.

“It’s one of those things that if you don’t do you will look back and say ‘I never talked about it,” Jillian Schwedler said after the meeting. “We believe all of the little things add up.”