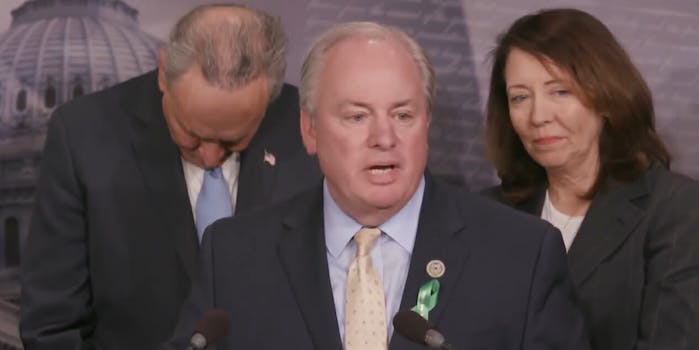 The House is currently 57 votes shy of a simple majority for their CRA.

After celebrating what they called a “historic” win when the Senate voted in favor to save net neutrality, internet activists are already turning their attention to what could be a more challenging battle in the House of Representatives.

The CRA effort will now face an uphill battle as lawmakers attempt to corral the necessary 218 votes to get a simple majority in the House of Representatives. But the more daunting numbers haven’t dampened the optimism among activists who are trying to drum up support.

The millions of people who called, emailed, texted, and delivered letters to senators will again be called upon to pressure members of the House to vote for the CRA, activists told the Daily Dot.

“We’re going to continue to harness this incredible grassroots energy, and work with advocates, startups and online companies to pressure members of the House to support the CRA resolution and the discharge petition to bring it to a floor vote,” Mark Stanley, director of communication at Demand Progress, told the Daily Dot. “We won’t be deterred—if we continue to organize, we can win in the House.”

Currently 161 members of the House have voiced support for the CRA that is co-sponsored by Rep. Mike Doyle (D-Penn.). That leaves them 57 votes shy of achieving the 218 needed to pass it.

However, 32 Democrats have not yet voiced support, according to a tally compiled by BattleForTheNet.com. If every Democrats in the House rallies behind the CRA—like their Senate counterparts did during Wednesday’s vote—it shrinks the number of needed votes down to 25 Republicans.

If successful in the House, President Donald Trump would still need to sign it, no guaranteed thing.

Doyle’s office did not immediately respond to a request for comment by the Daily Dot. But during a press conference on Wednesday he said he would file a discharge petition and work to get a vote in the House.

“I urge every member who supports a free and open internet to join me and sign this petition so we can bring this legislation to the floor,” he said.

Doyle added that the grassroots support from activists that was seen ahead of the Senate vote would be be needed for the companion CRA in the House.

The grassroots activism Doyle is looking for is already mobilizing.

Evan Greer, the deputy director of Fight for the Future, said the push to get more lawmakers to support the CRA will have to be “district by district.”

“We’ll be trying to engage the entire internet in the mission, and give everyone as much information as possible about who the most likely House members to flip are, and how we can convince them,” Greer told the Daily Dot on Thursday.

Greer said there will be online protests similar to the “Red Alert” one that was held ahead of the Senate vote, but there will be a focus on in-person protests as well.

“We’ll need to laser focus on putting real in-district pressure on the most important lawmakers in order to get the 218 votes we need to win,” Greer said. “The House fight is going to be an uphill battle, but the historic upset that was the Senate vote shows that victory is possible. Senator John Kennedy (R-La.) said it best, this is about whether or not people trust their cable companies, and I think more House members are going to realize where their constituents come down on that.”