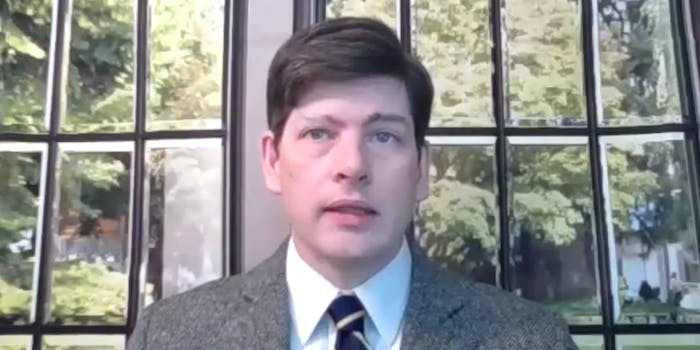 Simington's skepticism of Title II isn't all that shocking.

Nathan Simington, the Republican Federal Communications Commission (FCC) commissioner picked by former President Donald Trump, made it clear on Tuesday that he is against restoring net neutrality rules if it’s under Title II of the Communications Act.

Simington made the remarks during a speech at the Free State Foundation, a think tank. It’s not shocking that Simington opposes classifying internet service providers (ISPs) under Title II, it has been a Republican sticking point in the net neutrality debate for years.

In 2015, the FCC classified internet service providers under Title II of the Communications Act as part of its Open Internet Order, which established net neutrality rules. In the FCC’s 2017 repeal of those rules, it classified ISPs under Title I.

Title II concerns utility-style “common carriers” and has a stronger regulation than Title I. The Open Internet Order also used forbearance to choose selectively which sections of Title II wouldn’t apply to broadband. Net neutrality advocates have argued it is necessary for the rules and to give the FCC authority over broadband, while opponents have said it is overburdensome regulation.

There has been momentum for restoring the rules now that Democrats control the makeup of the FCC. That restoration, presumably, would be back to the 2015 Open Internet Order with Title II.

Simington signaled he was against Title II regulations in his speech on Tuesday.

“We can’t talk meaningfully about freedom, free markets, or deregulation in telecommunications without mentioning net neutrality. In my confirmation hearing, I said that I believed in a light touch regulatory regime. Title II net neutrality can have a light or a heavy touch. As it is likely to be back on the agenda this year, I think we need to get serious about what different approaches may mean,” Simington said.

He added that there could be “consequences” if ISPs are regulated under Title II and continued the talking point that Title II regulation would harm infrastructure investment.

“I come from the world of corporate and project finance, and that’s where I see some of the worst consequences if we aren’t very thoughtful about what kind of Title II we get,” Simington said, adding: “My biggest worry about Title II is really that, after a few years of chilling effects on infrastructure construction, we will find ourselves in an entirely avoidable and artificial broadband infrastructure crisis.”

Simington also noted during his confirmation hearing late last year that he saw “no reason” to reclassify ISPs under Title II again.

While Simington was clear he was against—or at the every least highly skeptical of—a Title II restoration, he did leave the door open for other possibilities.

“My view is that Commission decisions, even ones that ultimately do not command a consensus, are nonetheless formed organically by conversations, discussions, analysis, et cetera internally within the commission … I am not bringing an unchangeable closed mind to the commission on any topic, and certainly not on the highly fraught topic of net neutrality,” he said.