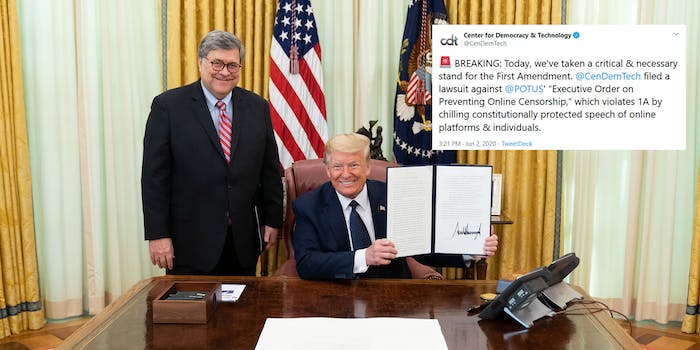 The suit asks the court to find the executive order invalid.

A consumer advocacy group said on Tuesday that it has filed a lawsuit against President Donald Trump’s social media executive order, claiming that it violates the First Amendment.

The suit was filed by the Center for Democracy and Technology on Tuesday in the United States District Court for the District of Columbia.

It claims that Trump’s order was “plainly retaliatory” against Twitter for fact-checking two of his tweets and is meant to “curtail and chill the constitutionally protected speech of all online platforms and individuals.”

Trump signed the executive order last week after complaining about Twitter putting fact-checks on tweets he made about mail-in ballots.

The order, among other things, asks the Federal Communications Commission (FCC) to look at the scope of Section 230 of the Communications Decency Act, a bedrock principle of the internet. The section shields websites from being liable for what is posted on them by third-parties.

The lawsuit asks for the court to declare Trump’s order invalid.

“The president has made clear that his goal is to use threats of retaliation and future regulation to intimidate intermediaries into changing how they moderate content, essentially ensuring that the dangers of voter suppression and disinformation will grow unchecked in an election year,” Center for Democracy & Technology President & CEO Alexandra Givens said in a statement.

“The government cannot and should not force online intermediaries into moderating speech according to the president’s whims. Blocking this order is crucial for protecting freedom of speech and continuing important work to ensure the integrity of the 2020 election.”

Twitter cheered the suit on Tuesday, calling the order “reactionary and politicized.”

After fact-checking two of Trump’s tweets, Twitter also hid one for “glorifying violence” after he wrote “when the looting starts, the shooting starts” in reference to the protests following a police officer killing George Floyd.