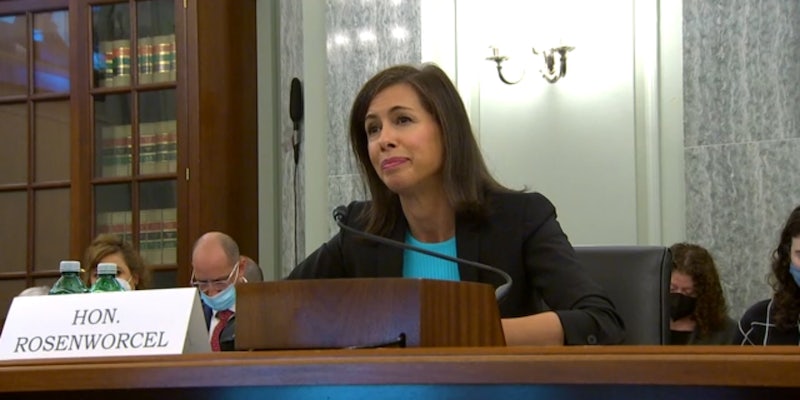 Jessica Rosenworcel, President Joe Biden’s nominee to chair the Federal Communications Commission (FCC), reiterated her support for net neutrality on Wednesday and said there was a need for oversight of the broadband industry.

Rosenworcel was tapped to be the permanent chair of the FCC by President Joe Biden late last month after serving as acting chairwoman since January. She was nominated for another term along with prominent public interest advocate Gigi Sohn to fill out the FCC after months of Biden failing to make any moves at the agency.

On Wednesday, Rosenworcel was one of several nominees who appeared before the Senate Commerce Committee during a confirmation hearing. The hearing comes as the Senate will have to rush before the end of the year to confirm Rosenworcel, to avoid a 2-1 Republican majority at the FCC, and Sohn, to give Democrats a majority.

While Rosenworcel had a hearing on Wednesday, a date has not been set for Sohn. However, Politico notes that it may come the week after Thanksgiving.

Sen. Ben Ray Luján (D-N.M.) touched on Biden’s months-long delay ahead of Rosenworcel’s testimony. Luján noted that his “only frustration” with Rosenworcel’s nomination was that it was “not done in March.” Luján had previously criticized the Biden administration for dragging its feet with announcing FCC nominees.

The timeline has been noticed by outside groups and the public also. On Tuesday, a coalition of more than 80 groups including Demand Progress, Free Press Action, Color of Change, the Electronic Frontier Foundation, MediaJustice, and others urged the Senate to swiftly confirm Rosenworcel and Sohn. Meanwhile, nearly 80,000 people have signed a petition urging the Senate to confirm the FCC nominees on BattleForTheNet.com.

During Wednesday’s hearing, Rosenworcel was asked about a number of topics, including the agency’s broadband maps, building out broadband infrastructure, robocalls, and the restoration of net neutrality rules.

Rosenworcel said the FCC would continue to work on updating maps that show the current state of broadband availability. Those maps would be key in the buildout of broadband in the recently signed infrastructure bill.

But, perhaps not shockingly, net neutrality was a topic that was brought up frequently.

Early on in the hearing, Sen. Roger Wicker (R-Miss.)—who has blocked attempts by Democrats to vote on a net neutrality bill—said that he felt the United States had done well with “light touch” regulation, referring to the FCC’s repeal of net neutrality rules in 2017.

In response, Rosenworcel said that the repeal was “broader” than just net neutrality rules like blocking, throttling, and paid prioritization of internet traffic.

Rosenworcel noted that the FCC’s repeal also took away the agency’s authority over the broadband industry. Specifically, the agency repealed the 2015 Open Internet Order, which classified internet service providers (ISPs) under Title II of the Communications Act.

“I think you know that I support net neutrality. I supported it in 2015, and then I opposed the rollback in 2017. I continue to support it,” Rosenworcel told Wicker, later adding: “I think the impact of the rollback in 2017 is broader than just net neutrality, because it took the FCC away from oversight of broadband. Coming out of this pandemic, I think all of us know that we need some oversight because it’s become such an essential service for day-to-day life.”

During the remainder of the hearing, other Republicans also brought up their opposition to reviving the rules. Rosenworcel repeatedly reiterated her support for it throughout the hearing.

Rosenworcel’s response is not shocking. She has long been a vocal supporter of net neutrality and opposed the FCC’s 2017 repeal.

In May 2019, Rosenworcel said the FCC created a “mess” after repealing the 2015 Open Internet Order and endorsed the Save the Internet Act, a bill that would have restored net neutrality that was blocked by Wicker in the Senate.

It is widely expected that once Democrats have a majority at the FCC it would move to restore net neutrality and Title II classification. The agency has already been encouraged by the Biden administration to do so.