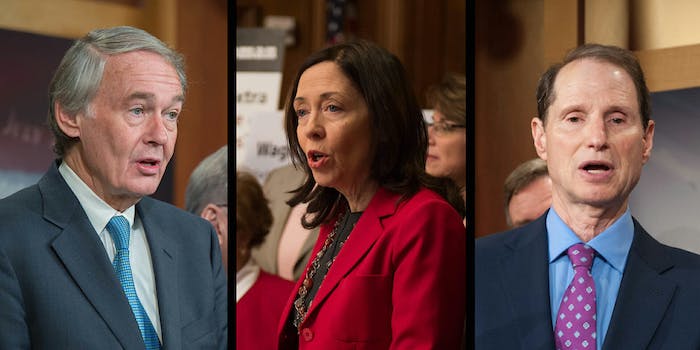 The attempt was shot down, but lawmakers said the fight will continue.

Several Democratic senators attempted to force the Senate to vote on the Save the Internet Act, a bill that would restore net neutrality rules, on Tuesday—but were shot down, a move that wasn’t surprising.

Sen. Edward Markey (D-Mass.), Sen. Maria Cantwell (D-Wash.), and Sen. Ron Wyden (D-Ore.) spoke in support of the bill on the floor of the Senate Tuesday morning, urging Senate Majority Leader Mitch McConnell (R-Ky.) to allow the Save the Internet Act to get a vote.

The calls from lawmakers and a separate push from internet rights advocates coincided with the first anniversary of the Federal Communications Commission’s (FCC) repeal of net neutrality rules going into effect.

Earlier in the day, a group of internet rights advocacy groups delivered petitions signed by millions of Americans in support of net neutrality to McConnell’s office.

A number of those same internet rights groups and tech startups also sent separate letters to his office asking for the Save the Internet Act to receive a vote. Net neutrality advocates also are running an all-day live stream.

On the floor of the Senate, Markey began by noting that a similar measure passed in the Senate last year during the Congressional Review Act effort to overturn the repeal.

“Net neutrality is just another way in which the Republican party refuses to side with the ordinary people in our country,” Markey said, adding: “The Save the Internet Act does exactly what the American people want.”

Wyden then spoke about tech issues, including how mergers can make it harder for small companies to compete, and disagreeing with the FCC’s argument that private investment in telecom would “boom” in the wake of the net neutrality repeal.

“The Trump FCC repealed net neutrality … by making some very far-fetched promises,” the Oregon senator said. “They said, for example, there would be new innovation … without any regulation. That hasn’t happened. The Trump FCC said the level of private investment in telecom would boom. We’re still waiting on that one, too. The Trump FCC spun a tale about ‘voluntary net neutrality—’we could all do this just voluntarily’—claiming that the big cable companies would do the right thing on their own. That one doesn’t even pass the smell test.”

“After one year, we already know what is happening to the internet, and one thing the United States Senate could do is have a vote to protect consumers from big cable companies overcharging them,” Cantwell said, adding: “We’re here today because we know that we’ve already seen the inklings of what is more to come: companies that are doing things that are slowing down, or charging consumers more. And we know that more than 20 million people stood up and told the FCC they want strong internet protections.”

Markey called for the use of “unanimous consent,” a Congressional mechanism, to try and force a vote on the bill.

Unanimous consent allows for floor proceedings to be set aside if no senator objects.

Wicker said there was “hyperbole” and “intense overblown rhetoric” surrounding net neutrality and echoed a number of Republicans by noting their opposition to the use of Title II of the Communications Act in the bill.

The Mississippi senator did not mention the “working group” he formed with Sen. Kyrsten Sinema (D-Ariz.), the only Democrat in the Senate who has yet to co-sponsor the Save the Internet Act. That working group has been called a “charade” by net neutrality advocates.

Following Wicker’s block of the unanimous consent call, Markey said the fight to undo the net neutrality repeal wasn’t over.

“Despite the Republican objections today, Sen. Cantwell, Sen. Wyden, and I, and tens of millions of people across this country will not stop fighting until net neutrality is fully restored,” Markey said. “Whether in the halls of Congress or in the courts of our country—that is going to be a fight that is fought until it is finally won.”

Markey was likely referring to the ongoing federal legal battle surrounding the FCC repeal. A decision is expected to come from the United States Court of Appeals District of Columbia Circuit later this year.

The Massachusetts senator also shot back at Wicker on Twitter.

“[email protected] just blocked a vote in the Senate on #NetNeutrality, but this fight is far from over. Raise your voice and tell Senate Republicans that you want a vote on the #SaveTheInternet Act. We can’t let @SenateMajLdr McConnell bury #NetNeutrality in his #LegislativeGraveyard,” Markey wrote.

.@SenateGOP just blocked a vote in the Senate on #NetNeutrality, but this fight is far from over. Raise your voice and tell Senate Republicans that you want a vote on the #SaveTheInternet Act. We can’t let @SenateMajLdr McConnell bury #NetNeutrality in his #LegislativeGraveyard. pic.twitter.com/W24U2C3cep

Mark Stanley, the director of communications at Demand Progress, told the Daily Dot the outcome of Tuesday’s Senate floor proceedings was expected, but echoed Markey in saying that the net neutrality fight was not over.

“By blocking a simple vote on restoring net neutrality protections, Republican leadership demonstrated how out of touch it remains with its own voters. Given Sen. Wicker and Majority Leader McConnell’s horrible track records on this issue, however, this move doesn’t come as a shock,” Stanley said. “Each time lawmakers obstruct commonsense net neutrality protections like they did today, they’re sending a clear signal to the American people that, for them, donations from the telecom industry outweigh the public’s ability to connect, communicate and access crucial services online. If anything, such blatant examples of politicians siding with telecom giants only re-energizes the grassroots. The net neutrality movement doesn’t give up. It only gets stronger, and that’s what’s going to happen after Wicker’s obstruction today.”