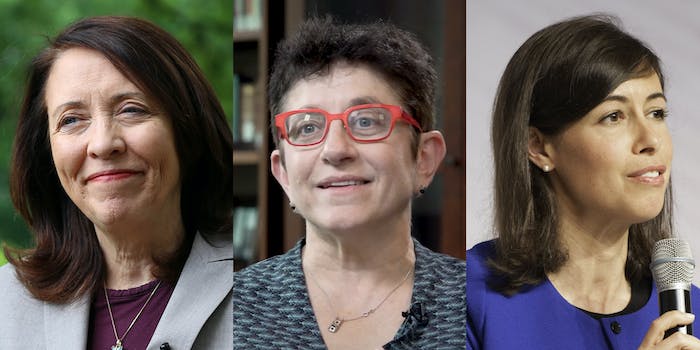 The timing is critical.

The Senate is being urged to swiftly confirm President Joe Biden’s Federal Communications Commission (FCC) nominees to avoid the possibility of the commission falling into a Republican majority in January.

On Tuesday, Biden announced his nominations of Jessica Rosenworcel, who had been serving as acting chair until yesterday, to become full-time chair and Gigi Sohn, a well-known public interest advocate and a former FCC official, as the third Democratic commissioner on the five-person agency.

The nominations came after a months-long delay, where advocacy groups and even members of Congress pushed the president to finally make a decision on who would break the FCC’s current 2-2 partisan deadlock. While the nominations received a lot of praise, the focus now will be on the confirmation process in the Senate.

Sen. Maria Cantwell (D-Wash.), the chair of the Senate Commerce Committee, said on Tuesday that the committee would “swiftly” consider the nominations “before the end of the year.”

That timing is important. As the Daily Dot previously reported, the Senate is going to have to move at a rapid pace to confirm Rosenworcel and Sohn if they want to avoid a Republican majority at the FCC. Rosenworcel has been acting chair for nearly 10 months, but her term as a commissioner at the FCC technically ended last year. However, laws allow her to remain at her post until early January. While Rosenworcel is now the chair of the FCC, her next five-year term needs to be re-confirmed before the end of the year.

Historically, the confirmation process takes several months. Tom Wheeler, who was nominated by former President Barack Obama in April 2013 was confirmed by the Senate in October 2013.

However, last year, Republicans—then in control of the Senate—moved at a brisk pace to confirm Nathan Simington to the FCC. Simington was nominated by former President Donald Trump to serve at the FCC in September 2020 and the Senate approved him in December.

But because of Biden’s delay in filling out the FCC, Democrats will have to move at an even quicker pace than Republicans did with Simington in order to confirm Rosenworcel and Sohn before the looming deadline.

Once they are both confirmed, and the FCC is fully staffed, it can begin to tackle items like restoring net neutrality and the agency’s authority over broadband.

“Time is a big factor here,” Mark Stanley, the director of operations at Demand Progress, told the Daily Dot. “While we do welcome the news of these nominations, we also have our eyes on the legislative calendar and the shrinking number of days left until Rosenworcel’s time on her expired term is left. Really, things have to move quickly from here out … These two nominees need to be confirmed as quickly as possible.”

Representatives for Cantwell at the Senate Commerce Committee told the Daily Dot on Wednesday that no date has been set for the hearings yet.

Numerous other advocacy groups also called for the Senate to move quickly on Rosenworcel and Sohn’s confirmations.

“These nominations could not come soon enough. Lawmakers should act swiftly to confirm these nominees so that the FCC can get back to work. Restoring Title II authority and net neutrality are just the beginning.” Evan Greer, the director of Fight for the Future, said in a statement. “It’s essential that the Biden administration and the Senate prioritize this.”