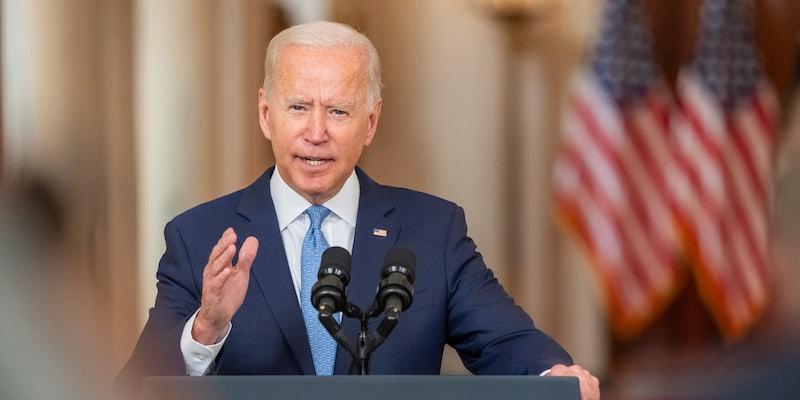 The law makes a massive investment in broadband.

President Joe Biden signed the much-anticipated, bipartisan $1.2 trillion infrastructure bill on Monday, which includes a massive investment in the country’s broadband infrastructure that aims to narrow the digital divide.

The U.S. has long struggled with the digital divide, the gap between people who have access to high-speed and affordable internet and those who do not, and the infrastructure bill will funnel $65 billion toward broadband initiatives that will seek to address the gap.

While Biden initially sought to invest $100 billion in broadband, the $65 billion in the signed bill will touch on numerous aspects of the digital divide, including the actual deployment of broadband into underserved and unserved areas of the country.

But it will also seek to address affordability problems with internet access by indefinitely extending a program that allows for people to get a monthly discount on their internet bills.

Biden noted the investment in broadband in a tweet on Monday evening, saying broadband was “as essential as access to water or electricity.”

“Access to high-speed internet is as essential as access to water or electricity,” Biden tweeted. “The Bipartisan Infrastructure Law will make high speed internet affordable and available everywhere in America—urban, suburban, and rural—and create jobs laying down the broadband lines.”

The broadband aspects of the bill also drew commendations from advocacy groups.

“With today’s signing, President Biden is taking a first step toward fulfilling his administration’s promises to make broadband more open and affordable. Meaningful support will now be available to tens of millions of people in the United States who have been unable to afford high-speed internet access,” Matt Wood, the vice president of policy and general counsel at Free Press Action, said in a statement. “The new law also provides funding for broadband deployment, digital inclusion and other investments in internet access and equity, which will help close digital divides and bring connections closer to home for countless more.”

Broadband in the infrastructure bill

Specifically, the infrastructure bill allocates more than $42 billion for grants to be used by states to build out broadband in unserved areas of the country.

Meanwhile, $14.2 billion will be used to continue—and rename—an existing program at the Federal Communications Commission (FCC) that helps eligible people get a monthly discount on their internet bills.

The infrastructure bill will rename the Emergency Broadband Benefit (EBB) to the Affordable Connectivity Program. The EBB has seen more than 6 million Americans sign up for it since it was launched earlier this year as part of a coronavirus bill.

The EBB, which is available to Americans who meet certain criteria like being enrolled in SNAP, Medicaid, Lifeline, or having a child in a reduced-price meal program at school.

It originally had $3.2 billion allocated for it as part of a coronavirus relief bill and was scheduled to end once the government ended the COVID-19 emergency or the money ran out. The infrastructure bill signed on Monday would extend the program indefinitely.

However, the infrastructure bill will lower the monthly discount available to enrollees from $50 to $30 per month.

The bill also targets “digital discrimination” in the country and directs the FCC to create rules within two years that “facilitate equal access to broadband internet access service” and are aimed at “preventing digital discrimination of access based on income level, race, ethnicity, color, religion, or national origin.”

“Broadband connects us to jobs, education, healthcare, and each other. But tens of millions of Americans without reliable, high-quality internet access cannot share equally in those benefits,” FCC Commissioner Geoffrey Starks said in a statement. “The plan President Biden signed into law today makes historic investments in righting that longstanding wrong: expanding broadband infrastructure, making broadband affordable, and empowering Americans with digital skills and inclusion. We now have a once-in-a-generation chance to bring broadband to all Americans. Let’s get to work.”