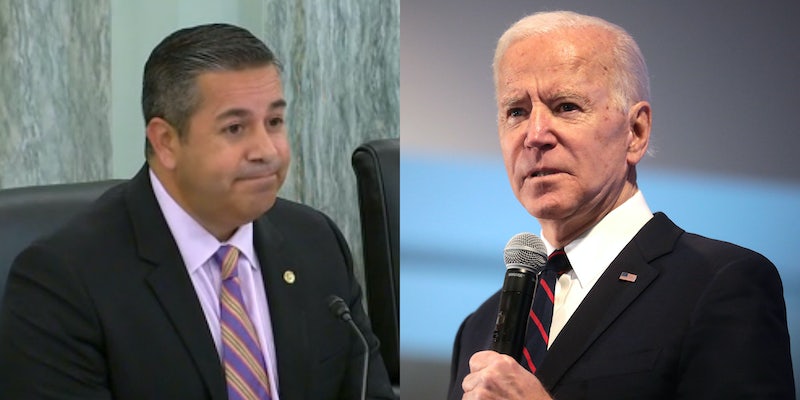 ‘It is simply unacceptable and inexcusable’: Democrat urges Biden to finally fill the FCC

Biden's inaction continues to get noticed.

Sen. Ben Ray Luján (D-N.M.) urged President Joe Biden to have a sense of “urgency” in filling the Federal Communications Commission (FCC) and expressed frustration that he has taken so long to do so.

Luján called Biden’s historic delay in finalizing the makeup of the five-person agency “unacceptable” during a Senate Commerce Committee Communications, Media, and Broadband subcommittee hearing on Thursday. Luján is the chair of the subcommittee.

Pressure has ratcheted up recently for Biden to finally fill the FCC, after public interest groups, advocates, and others have pushed him to do so for months. Earlier this week, Michael O’Rielly, a former Republican commissioner, said that he was “completely perplexed” as to why Biden has not moved quicker to fill out the FCC.

Biden inherited an agency deadlocked 2-2 along party lines when he took office. As president, Biden has the ability to name a chair of the FCC and nominate commissioners who are confirmed by the Senate. But the president has only named Jessica Rosenworcel, a Democrat who was already on the commission, as the acting chair.

That deadlock has left the FCC unable to move on a number of different matters—such as restoring net neutrality rules—that would almost assuredly require a 3-2 vote.

If Biden does not nominate someone soon, he risks the FCC falling into a Republican majority. Rosenworcel’s term technically ended last year, but rules allow her to continue to serve until “the expiration of the session of Congress that begins after the expiration of the fixed term,” which would be January 2022.

That ticking clock was mentioned by Luján on Thursday. He also endorsed Rosenworcel to become the permanent chair of the agency.

“Under the leadership of Acting Chairwoman Rosenworcel, the Federal Communications Commission has been able to make progress here, even with a 2-2 commission. Now imagine the progress that the FCC could make if there were five members. It is simply unacceptable and inexcusable that there’s no urgency from this administration to nominate a fifth commissioner,” the senator said.

“I would say nominate Acting Chairwoman Rosenworcel not just for another term, but to be the full chair of the commission. I don’t understand why this has not happened,” he said, later adding: “If there’s not urgency in appointing a fifth FCC commissioner, re-nominating Commissioner Rosenworcel, there’s going to be three FCC commissioners instead of five in January. It’s unacceptable.”

Luján said the full FCC and a permanent chair of the NTIA were needed to help with the rollout of billions of dollars that are part of numerous broadband initiatives.

The New Mexico senator was one of 25 senators who wrote to Biden two weeks ago endorsing Rosenworcel and urging the president to “appoint her to this role as quickly as possible.”