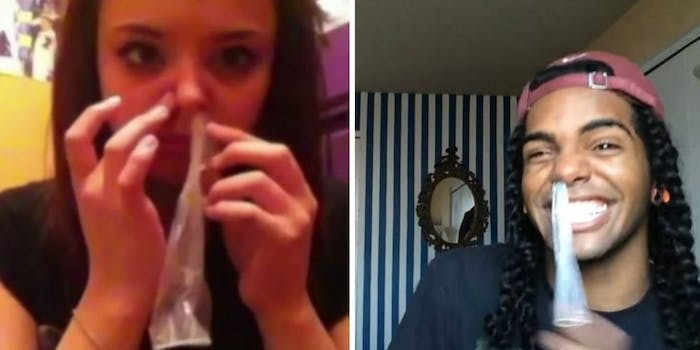 Here are all the dumb, dangerous social media challenges of 2018

It's probably best if you don't try any of these at home.

Some YouTube challenges are wholesome and fun and make you feel good all over. Some are silly. Take, for instance, the Macarena-like Skibidi challenge that briefly made the internet go bonkers, or the one that convinced people to act like Kanye West for a day.

But, like so much of YouTube, there’s plenty to dislike about viral challenges. Some are toxic. Many of them are dangerous. Most of them are stupid. And hopefully, all of them are stricken from our memories (and from existence in general) as soon as possible.

As the year winds down and we review the best and worst of 2018 on the internet, it’s worth taking a look back at the worst challenges we saw. We imagine 2019 will bring more ridiculous challenges to YouTube, but 2018 seemed like a banner year for the most vapid ones. Be happy that you survived them.

Was this even a real thing? Some YouTubers wanted you to believe it was, and that people were actually eating laundry detergent pods (or at least chewing them up and spewing out the soapy saliva mess). YouTube responded by taking down videos featuring the challenge, and most turned out to be fake. Some people, though, took it seriously. In the first two weeks of January, the U.S had 39 reported cases of teenagers eating laundry detergent. In all of 2017, there were only 53 cases. Luckily, by the time February rolled around—about the time Logan Paul gave his endorsement—the challenge had fallen out of fashion. It’s mostly stayed that way since.

2) “In My Feelings” Challenge

It was the summer of Drake, and plenty of people took inspiration from his song “In My Feelings” to recreate the dance craze started by internet personality Shiggy. Originally, it was just some simple dance moves. But then some took the challenge to dangerous places, including outside of a moving car on a busy freeway.

Or on top of a moving motorcycle.

The National Transportation Safety Board actually had to jump in and warn people of the challenge’s dangers. Still, that didn’t stop millions of people from tuning in on YouTube to watch compilations. Mostly, this is a fun challenge. But doing it in a stupid way could be costly.

Why anyone would want to stick a prophylactic up one nostril, deeply inhale, and then pull it out of the other nostril without trying to gag and puke is beyond the logic of most people. Yet, YouTubers were accomplishing exactly that for views. This wasn’t a new trend—apparently one version predates YouTube, going back to the Jim Rose Circus sideshow of the 1990s—but it went viral in 2018 because some parents finally discovered its existence. Obviously, the challenge is stupid and dangerous. “Imagine stuffing up your nose something that is larger than your nostril opening and designed not to break,” wrote Forbes’ Bruce Y. Lee, an associate professor of International Health at Johns Hopkins. “The condom could easily get stuck in your nose or your throat, blocking your breathing or causing you to choke.” Luckily, the condom challenge seems to have disintegrated without causing too much damage.

The title pretty much says it all: A YouTuber waits until 3am before trying to incite some paranormal activity. If you’re ImJayStation, you try to reach the spirit of the recently departed Mac Miller. If you’re preteen YouTuber Ruby Rube, you ask Siri spooky questions. The movement didn’t begin in 2018—Know Your Meme tracks it back to the beginning of 2017, when it was employed mostly by gamers—but it gained more traction this year, leading some to call it a clickbait strategy. Some parents got the spooks themselves when their young kids asked to participate in the challenge.

Just by the name alone, you have to know this challenge—which involves covering yourself in flammable liquid and setting yourself on fire in front of a video camera—is dangerously stupid and potentially deadly. One 12-year-old was severely burned on nearly half her body after participating. It should go without saying, but never, ever try the fire challenge—unless, of course, you want to deal with horrific pain and possible body scarring for the rest of your life.

Much like the fire challenge, it doesn’t take a genius to understand that you shouldn’t try the hot water challenge. This one involves pouring boiling water on yourself, pouring it on somebody else, or trying to drink the boiling liquid. Unsurprisingly, people have been badly injured and, as in the case of one 8-year-old girl, died. When kids and people who don’t know better are inspired to try these types of challenges because they saw it on YouTube, there’s a big problem.

There’s nothing inherently dangerous about YouTubers trying to spend 24 hours inside a Chuck E. Cheese or a McDonald’s without being caught—at least on the surface—but it’s kind of dumb and, worst of all, kind of boring. The challenge began gaining popularity in 2016, but it rose to an internationally mainstream level in April 2018 when an 11-year-old boy who had gone missing was found staying overnight at an Ikea. One U.K. police spokesperson said, via the Telegraph, that the challenge could be risky and “catastrophic. “Warehouses and shopping departments contain large quantities of heavy stock and items that could easily fall and crush someone,” the spokesperson said.

This challenge involved, um, pretending to fall on your face with your possessions all around and getting someone to take a photo. The falls were supposed to look as silly as possible. Really, this challenge was sort of fun and not too dangerous. It started in Russia to apparently show off people’s wealth on social media, but soon it was taken over by the less well-off in the rest of the world. Ultimately, this challenge became about taking back power for people who didn’t have the most means, who weren’t the most wealthy, or who didn’t have everything just handed to them. Which means of the challenges on this list, it was probably the most worthwhile of all.