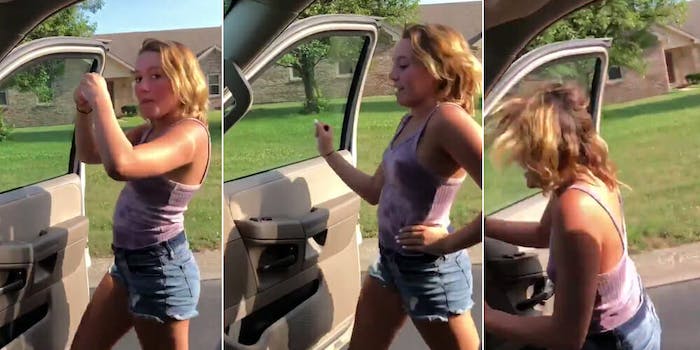 Police: Please stop doing the ‘In My Feelings’ challenge before you get hurt

The Drake song has inspired a dangerous trend.

Law enforcement and safety groups around the world are warning people to stop doing the “In My Feelings” challenge before someone gets hurt.

The National Transportation Safety Board issued a warning on its official Facebook late Monday to remind people that exiting a still-moving car is incredibly dangerous and we can’t believe people over the age of 8 have to be reminded of such things.

We have some thoughts about the #InMyFeelings challenge. #Distraction in any mode is dangerous & can be deadly. Whether…

Posted by National Transportation Safety Board on Monday, July 23, 2018

The “In My Feelings” challenge, also known as the “Keke challenge,” spawned from an Instagram clip of online personality Shiggy doing an interpretive dance to the hit Drake song in the middle of the street. Shiggy was smart enough to not attempt the dance after exiting a moving vehicle.

Celebs jumped on the bandwagon, and everyone from Will Smith, Ciara, Russell Wilson, and even Drake himself posted videos of Shiggy’s dance.

It’s unclear exactly where the Kiki Challenge went from “dancing in the middle of the street” to “exiting a moving vehicle to dance in the middle of the road while the car rolls in neutral.” As these clips will show, the “In My Feelings” challenge has caused more than hurt feelings.

Police in Spain and the United Arab Emirates are also warning people not to attempt the Keke challenge. The challenge was banned in Egypt after traffic officials said it broke the country’s traffic laws and warned that jail time could be a consequence if a person is found guilty.

Maybe the only person who doesn’t want to see the challenge end any time soon is Drake himself. The viral stunts are helping the single, and his album Scorpion, stay at the top of the music charts.