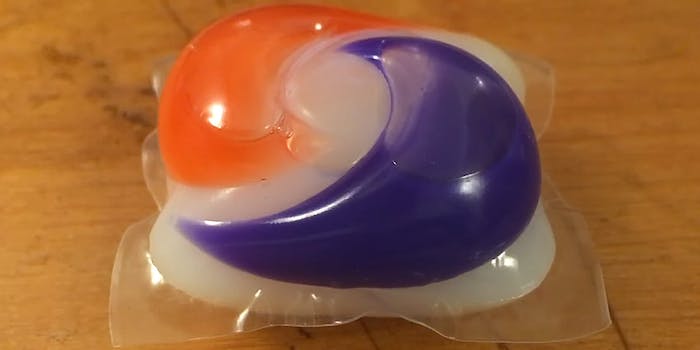 Tide Pods look like candy, but they are not candy. They are little capsules of laundry detergent. Eating them is a bad idea! Despite this, “eating Tide Pods” is the biggest meme on the internet as 2017 gives way to 2018.

The meme has its genesis in real-life incidents of kids (and, more commonly, adults with dementia) dying after eating the pods.

The joke about the pods looking irresistibly tasty has been around as long as the pods themselves. In 2015, the Onion published a parody article titled, “So Help Me God, I’m Going to Eat One of Those Multicolored Detergent Pods.”

With their knack for transmuting tragedy into bizarro comedy, memes are the perfect medium to make Tide Pods looking like a snack into a joke. And that’s exactly what has happened. Everyone is pretending Tide Pods are delicious.

It’s not clear why this meme blew up in December 2017, but it may have been this Dec. 9 tweet by mineifiwildout.

Even celebrities are doing it. Halsey, known for her vocals on the ubiquitous Chainsmokers song “Closer,” is getting “closer” to eating some Tide Pods all the time.

And someone even tried to get Gushers—the goo-filled fruit snack brand that comes to mind for many when they see laundry pods—to make a Tide Pod fruit snack. They got blocked on Twitter for their trouble, but the attempt is legendary:

i really tried and died for the cause pic.twitter.com/WxtF27BMjP

Tide Pods may look delicious, and they may be the forbidden fruit. People may even be cooking them as a joke. But don’t eat them, okay? They probably taste disgusting, and they’re also potentially deadly. Meanwhile, Tide announced earlier this year that it’s working on tougher packaging and more prominent warning labels to prevent people from treating its detergent as a snack.