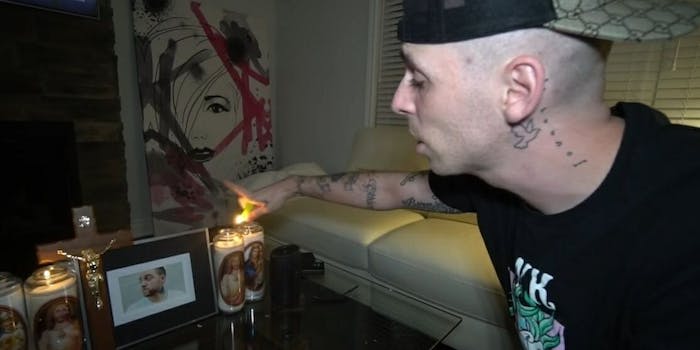 He doesn't see what the big deal is.

A few days after Mac Miller died, YouTuber ImJayStation set up a sort of ghost-scanning device, turned on his camera, and attempted to summon the late rapper’s spirit. The YouTube star has been blasted on the internet for profiting off Miller’s death ever since.

But ImJayStation, whose real name is Jason Ethier, adamantly denied to the Daily Dot that it was his intention to exploit Miller. Instead, he said he’s making the kind of content he thinks people will enjoy, and looking at his pageviews, he’s often right.

Ethier frequently participates in what’s known as the “3am Challenge,” the point of which is to summon spirits or to create other paranormal activity for late-night content. He’s played an Ouija board at 3am, he’s summoned the Slenderman at 3am, and he’s FaceTimed Michael Myers at 3am. But the video he uploaded a month ago, titled “(RIP) MAC MILLER SPIRIT BOX CHALLENGE AT 3AM!! *SPEAKS ABOUT ARIANA GRANDE*,” published only four days after Miller died, had plenty of YouTube users livid.

“I don’t think I’m exploiting anyone for making a video,” he told the Daily Dot in an email. “Everyone gains attention from [celebrity] deaths, by talking about it, etc. I never talk trash about a celebrity who passed away and know several people who use [Electronic Voice Phenomena (EVP) devices] to try to communicate with lost loved ones.”

In the video below, Ethier claims to be using a spirit box to contact Miller.

Before he begins his EVP session with Miller, Ethier lights candles in his mini Miller shrine and explains that sometimes when people first die, it takes them extra time to cross over to the “other side.” He said he could use an EVP device to scan the AM and FM radio waves that some say allows spirits to communicate with the real world.

After Ethier turns on the speaker that connects to the EVP device, the word “Satan” is said (or at least that’s what Ethier captions in the video). A few seconds later, the speaker says, “Sounds like it’s just the two of us.” From there, Ethier tries to have a conversation with anybody who will answer, asking if Miller wants to comment on Ariana Grande (who was blamed by some for Miller’s death) or if he has a message for his family, friends, and fans. We hear a bunch of garbled, possibly fake voices. Halfway through, the TV in the room begins to show a video of Miller. (“That’s got to be a sign,” Ethier says.)

Then, Ethier purports to have a stilted conversation with Miller in which rapper supposedly said he made a mistake and not to worry because he’s OK. Mysteriously, a Grande video then plays on the TV as the EVP cuts out.

After watching, many weren’t convinced this exercise was legit, but even more people were upset that Ethier filmed this in the first place.

“Just because someone succeeds and becomes famous doesn’t give you the right to use their name for your benefit, and especially not their death,” PowerOnline said. “It’s disgusting.”

YouTube pundit Keemstar also was critical of Ethier’s video, even though the Drama Alert host admits that, by criticizing Ethier, he’s indirectly profiting off Miller’s death as well. He said Ethier and a YouTuber named Michael McCruden, who creates biographies on people who are alive and obituaries on those who have just died, are “scumbags” and specifically called Ethier a “sick son of a bitch.”

Ethier—who made mainstream news in March by vlogging his arrest at Disney World—told the Daily Dot that his video didn’t receive any hate until YouTubers like Keemstar and adam22 spotlighted it on their channels. “People just follow the [herd], whoever has the biggest influence wins the morality game,” Ethier said.

Many of the commenters in the video, though, also blasted him. In the vlog, Ethier said that every “like” on the video would represent a prayer for Miller and that he was asking for 100,000 of them—more than 69,000 people responded by giving a thumbs down to the video, more than twice as many “likes.”

Here’s a sampling of how people responded.

Another reason people are upset by Ethier is that he performed a similar stunt following the death of XXXTentacion when he tried to use an Ouija board to contact the rapper about a week after he was shot to death. Ethier said he’ll stop that practice.

“No I won’t do another celebrity who dies, even though if I did a EVP or Ouija Board video on Michael Jackson, Elvis, the Beatles, etc, people wouldn’t care if I did that,” Ethier said in the email. “They only care if they recently died for whatever reason that is.”

Ethier, though, can also see the opposite point of view.

There’s little doubt that people are interested in Ethier’s videos. His 3am Challenge vlogs attract hundreds of thousands of views (his XXXTentacion piece earned more than 1.3 million). But it sounds like Ethier will be a little more cautious in the future. And if not, YouTuber PowerOnline has a warning for him.

“Do some research and treat the subject with care,” they said, “or you’ll have Power and plenty of other channels profiting off your fuck up.”