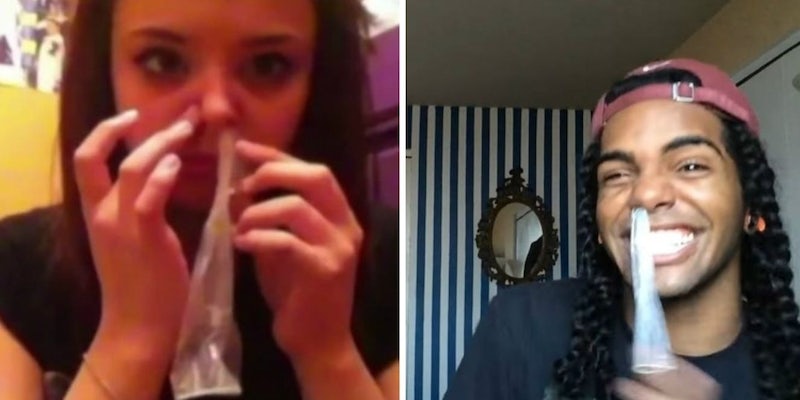 The ‘Condom Challenge’ has totally expired

Teens have moved on.

Much like people know in their hearts that they shouldn’t eat Tide Pods or inhale copious amounts of cinnamon, people must realize that snorting condoms is a terrible idea.

Yet, according to many news outlets, that is the latest parenting nightmare as teens across the internet are sticking a condom up one nostril and inhaling it through their nasal cavity until they can pull it out of their mouth. You film it, and after you post the video on YouTube, you’ve officially completed the “Condom Challenge.”

Yes, people on YouTube have actually done this, and these videos are mildly disturbing and entirely cringe-worthy.

But this isn’t a new phenomenon. The Young Turks covered the trend in 2013, complete with a dated Swift Boat reference, and another video mentions the wonders of the late Vine. If you search YouTube, the only new videos mentioning the challenge are news reports saying that it’s the latest internet trend. But most of the videos of people actually inhaling condoms are from at least two years ago.

In fact, the newest so-called condom challenge is filling a condom with water, much like you would with a balloon, and dumping it onto somebody else’s head to see if the condom will break (though the Sacramento Bee reports that this particular trend actually began in 2015).

This is what happens when you complete it successfully.

So, why are news sites like Forbes, USA Today,  and International Business Times just now covering the story about teens inhaling condoms? Perhaps because parents in San Antonio are attending informative classes about dangerous internet fads and at least one local TV station covered the story last week.

“Because these days our teens are doing everything for likes, views, and subscribers,” one educator told News 4 San Antonio. “As graphic as it is we have to show parents because teens are going online looking for challenges and recreating them.”

It should go without saying, of course, that snorting condoms is dangerous.

“Anything else that goes up your nose can damage the sensitive inner lining of your nose, cause an allergic reaction, or result in an infection,” wrote Forbes’ Bruce Y. Lee, an associate professor of International Health at Johns Hopkins. “Now, imagine stuffing up your nose something that is larger than your nostril opening and designed not to break. That would be as foolish as, well, trying to inhale a condom. The condom could easily get stuck in your nose or your throat, blocking your breathing or causing you to choke.”

Lee also noted there are cases where women accidentally inhaled or swallowed a condom during oral sex that led to lung collapse, appendicitis, and pneumonia.

So, yes, snorting condoms today is a terrible idea, just like it was in 2013 or 2015. But that doesn’t mean the latest news of a so-called viral crazed called the “Condom Challenge” should worry parents. It’s not fake news—just old news.