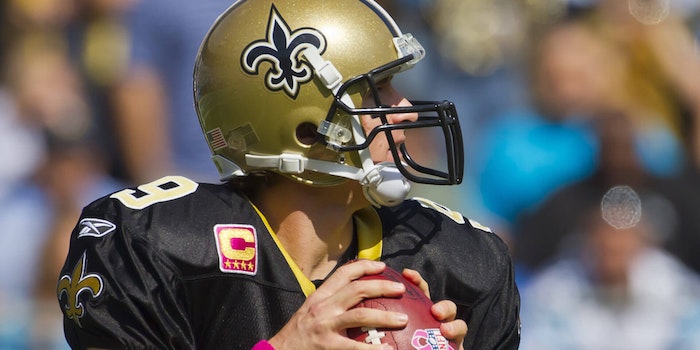 How to watch Saints vs. Buccaneers in NFL Week 5

Two powerful offenses will mix it up for supremacy in the NFC South.

The New Orleans Saints are known as an offensive team, but with Drew Brees sidelined, it was the defense that came up big last week. Though Teddy Bridgewater has been shaky, the Saints keep piling up Ws. However, despite their so-so record, the Tampa Bay Buccaneers may pose a real challenge to New Orleans this week.

Though Bridgewater didn’t play a great game, throwing for only 195 yards, he managed to feed his team’s best players. Michael Thomas caught nine balls for 95 yards, while Alvin Kamara still managed 69 yards on a quiet day for the star back.

The Saints defense isn’t always this good, but they have really stepped up in Brees’ absence. Though, the question is whether they can keep it up. Despite the win, Bridgewater made some very bad mistakes, including taking a sack for a massive loss late in the game that almost changed the outcome.

It feels strange to say, but this up-and-down Buccaneers team might be the team the Saints don’t want to see right now. Averaging over 30 points a game and coming off a mammoth 55-point scorcher against LA, you have to wonder if a Brees-free Saints will be able to keep up with Tampa Bay.

No, the Buccaneers aren’t perfect, but, Jameis Winston has been throwing for nearly 300 yards a game, while Bridgewater is averaging a measly 178. Can Teddy keep up?

Tampa’s defense has also looked good. Three interceptions against the Rams and a wild strip sack that led to a Ndamukong Suh touchdown to put the game away showed just how effective this D can be.

The Buccaneers aren’t perfect. Tampa’s secondary hasn’t played as well as its front, and Winston still tends to make risky throws that can lead to picks. But this team feels better than their record. As a result, they are a threat to any team.

In short, look for a competitive game with outcomes that could vary wildly depending on how the quarterbacks play and which defense gets more pressure.

There are a number of options for watching Saints vs. Buccaneers on streaming platforms that carry FOX. However, consult a coverage map to see what game your regional channel will be playing.

While select football games are no longer on Sling, you can still catch them with AirTV.

Michael Thomas, Wide Receiver: It’s easy to point to Thomas or Alvin Kamara as starters. However, with Teddy Bridgewater at the helm, it is hard to consider any other Saints player a surefire option. Look for these two to continue taking the bulk of the work until Drew Brees returns and mixes things up.

Chris Godwin, Wide Receiver: Every Mike Evans owner is starting him. Now, Godwin should also be considered a must-start. Godwin has actually outperformed Evans in three of the first four games.

New Orleans Saints vs. Tampa Bay Buccaneers: Why it matters

Any inter-divisional matchup matters, but with the Falcons and Panthers struggling in various ways, these might be the two best teams in the division.

For Tampa Bay, the key is going to be limiting Jameis Winston’s mistakes. If he plays a clean game, this is a team that can beat anyone, as they proved last week. While Winston isn’t Drew Brees, he is certainly the better signal-caller in this matchup.

New Orleans needs a complete game on both sides of the ball to hide Teddy Bridgewater’s weaknesses here. Tamp Bay is a productive team, and replicating last week’s defensive stand is going to be a tough ask.

We still give the edge to the Saints here because coach Sean Payton has found a way to make it work with Bridgewater so far. Given his track record, it is best to trust him until he gives us a reason not to. However, if anyone can take advantage of Bridgewater’s weaknesses, it is Bucs coach Bruce Arians, long known as a QB whisperer.

Though it is hard to guess what this game will look like, it promises to be one of the most interesting matchups of Week 5.