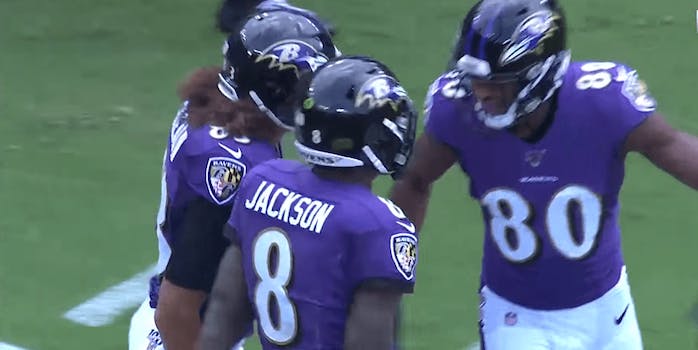 How to stream Seahawks vs. Ravens in Week 7

Lamar Jackson and Russell Wilson face off in a matchup between two strong squads.

You don’t necessarily have to pile up huge passing numbers to win. The Seattle Seahawks and the Baltimore Ravens have been two of the NFL’s most successful teams through six weeks by playing smart, tough football. With their strong running games and resilient defenses, neither team has had to force the ball through the air to come out on top.

Russell Wilson is averaging 284 yards per game and has thrown for as low as 196 yards. But Wilson always plays smart, precise football and avoids turnovers, which has put him in the MVP conversation. Running back Chris Carson has had a great season, as well, averaging 84 yards rushing per game. Though this offense will miss injured tight end Will Dissly, there is a lot to love here.

On the other hand, Seattle’s defense has been middle of the road, struggling to get their pass rush going. The team has also been poor against the run, and the secondary has not been able to get as many picks as you might expect. This isn’t a terrible unit, and players like Shaquill Griffin can change the game by themselves, but there is room for improvement.

Meanwhile, the Ravens have been really impressive on the ground. But the question with Lamar Jackson is if this team can keep winning with an imbalanced attack. While Jackson may run for over 100 yards in one game, he also sometimes passes for less than 200 yards.

But Baltimore’s secondary has been a mixed bag. Against the Bengals last week, star cornerback Marlon Humphrey’s great play was somewhat diminished by Maurice Canady’s terrible game. The Ravens traded for Marcus Peters this week, so maybe their secondary will find more balance going forward.

Similarly, the Baltimore pass rush and linebacking has been lackluster, leading to a 22nd-ranked defense by DVOA.

These defenses are both up and down, but we will give the advantage in this game to the Seahawks due to the versatility of their offense. The Ravens can be a one-dimensional team, and while they might run all over the Seahawks, they could suffer the same fate themselves.

Never underestimate the rushing tandem of Jackson and Mark Ingram, but we will trust Wilson’s stellar play to make the difference here.

There are a number of options for watching Seahawks vs. Ravens on streaming platforms that carry FOX. However, consult a coverage map to see what game your regional channel will be playing.

D.K. Metcalf, wide receiver: Metcalf could be a surprisingly strong option in the passing game this week because Will Dissly is out for the season and Tyler Lockett is matching up Marlon Humphrey. Consider Metcalf as your flex.

Mark Ingram, running back: At this point, you are starting Ingram every week. However, we’ve placed him here to remind you that this defense isn’t what it used to be. Ingram should have a fine time rushing against the Seahawks, as a number of backs have been productive against Seattle.

Seattle Seahawks vs. Baltimore Ravens: Why it matters

Despite this being an out-of-conference game, the stakes are pretty high. The Ravens are the clear leaders in the AFC North, but since the Browns and Steelers are still showing signs of life, they can’t afford to take a week off. Baltimore is the best team in a bad division, but they have to prove they are more than a playoff team by default.

Seattle is in the ultra-competitive NFC West, so every game is going to matter for the eventual division winner and anyone with wild-card aspirations. Only one game out of the division lead, the Seahawks ought to treat every game like it is the playoffs.

We like the Seahawks here because we trust Russell Wilson over Lamar Jackson. But, if Jackson and company get rolling on the ground, things could swing toward Baltimore. Look for Seattle to pull this out in a close one.