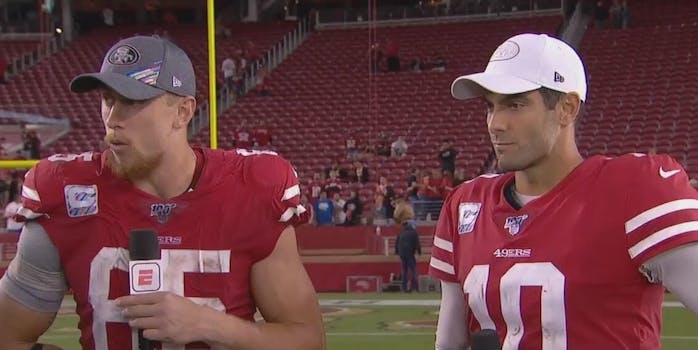 How to stream Rams vs. 49ers in NFL Week 6 action

The upstart 49ers make a bid for NFC West supremacy in Los Angeles.

The 49ers are on top of what might be the most competitive division in football. Last week, the Los Angeles Rams took their second loss while the San Francisco 49ers took care of business against the up-and-down Browns. The result: San Francisco is the best in the NFC West.

This doesn’t feel like a fluke, either. The Rams are not perfect, despite their high-powered offense. Jared Goff is prone to off weeks even with his vaunted receiving corps. During some games, Goff’s slow starts have forced the Rams to rely on passing and limit star running back Todd Gurley.

Then on defense, the Rams have trouble getting pressure. They only generated one sack against Russell Wilson last week, and they made Jameis Winston look like a star the week before. The secondary has been uncharacteristically soft recently, which is not good if you are giving opposing QBs time to throw.

The Rams are still elite, but if they don’t adjust, the 49ers could hand them their third-straight loss. San Francisco has one of the NFL’s best defenses, as they demonstrated during the Browns game. The Niners made Baker Mayfield look terrible last week, limiting him to 100 yards.

San Francisco doesn’t have a perfect offense, but with Matt Breida bruising from the backfield and George Kittle finding his way to the end zone every week, they get the job done.

Another win for the 49ers isn’t a guarantee. If the Rams’ passing game is in top form, it will be hard for Jimmy Garoppolo and company to keep up. However, if the San Francisco defense has their way with Goff, look for the Niners to extend their undefeated streak.

There are a number of options for watching Rams vs. 49ers on streaming platforms that carry FOX. However, consult a coverage map to see what game your regional channel will be playing.

Gerald Everett, Tight End: Teams will be rushing to start Everett after last week, when he caught seven passes for 136 yards. Embrace the gold rush: Everett is getting more targets every week, so it looks like he is part of the long-term plan in LA.

Matt Breida, Running Back: Breida has developed into an every week must-start back this season. He’s averaging 85 yards per game. Considering his season low was in Week 1, his numbers have been even better the last few weeks.

Los Angeles Rams vs. San Francisco 49ers: Why it matters

Every division game in the NFC West is deeply important. With these two teams and the Seahawks all looking like playoff teams and the NFC North looking equally strong, one of these teams will likely miss the playoffs.

This means that any divisional loss could come back to haunt these teams despite their elite units.

It’s hard to predict who will come out on top here. It’s a matter of whether the Rams’ offense or the 49ers’ defense controls the day.

We give the slight edge to the Rams, who will be desperate to stop their two-game skid and are playing at home, but don’t be shocked if the Niners improve to 5-0.