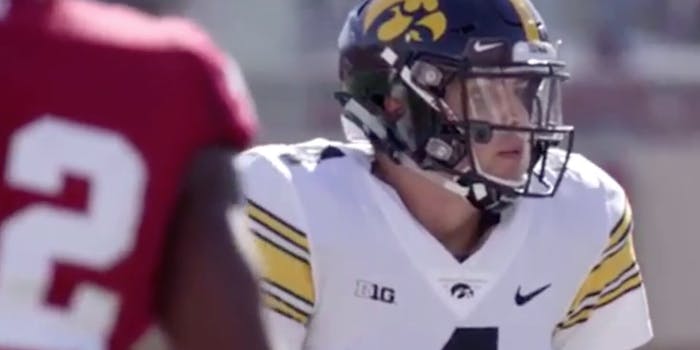 How to stream Iowa vs. Michigan

Which team will show up for the Wolverines versus the sturdy and steady Hawkeyes?

No. 14 Iowa travels to “The Big House” to face the No. 19 Michigan for a highly-anticipated, high-stakes Big 10 rumble. The always-steady Hawkeyes arrived undefeated with a 4-0 record, coming off last week’s momentum-building steamrolling of Middle Tennessee State, 48-3, where they held the Blue Raiders to just 216 total yards.

The mercurial Wolverines rolled over Rutgers 52-0, holding the Scarlet Knights to a mere 152 yards of offense. QB Shea Patterson played a decent game, putting up 276 yards, one score, and a pick. Junior defensive lineman Kwity Paye lived in the Rutgers backfield, totaling 6 tackles, 3.5 TFL, and 1.5 sacks.

However, even with this good-looking win, Michigan’s season (and the state of its program) remain in question. Head coach Jim Harbaugh found himself under a series of buses following the tough Wisconsin loss, and could be in line for more questions should the talented Wolverines take another loss at home.

Iowa vs. Michigan: What to watch for

The entire story breaks down to one question: Which version of the Michigan Wolverines will stand up in a huge game for both the season, and the program? Having already lost to Wisconsin, another loss to the Hawkeyes will bring all of the question marks back about the progress of Harbaugh’s regime and its championship aspirations. Remember, this season was supposed to represent a sharp step upward into the air reserved for Clemson, Georgia, and Alabama.

Iowa head coach Kirk Ferentz said that he thought Michigan had hit its stride versus Rutgers. We’ll see how much forward progress is made with significantly more resistance.

Holding a road chalk line, Iowa is currently a 3.5 point favorite, according to Odds Shark. Sports Chat Place, however, notes that Hawkeyes are an even 2-2 against the spread this season.