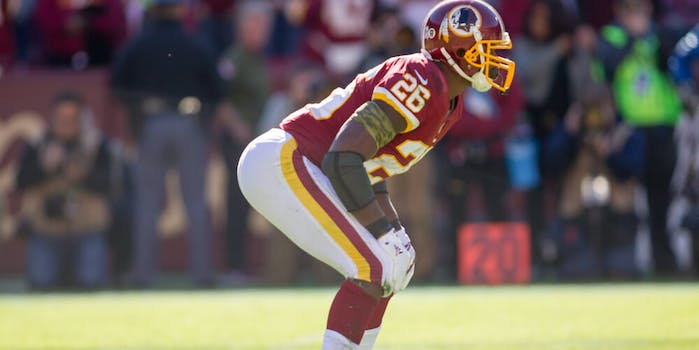 How to stream Giants vs. Redskins in Week 4

After an impressive debut, Daniel Jones will look to establish himself with another win against the Redskins.

If the Daniel Jones is any good, the Giants are going to blow out the Redskins.

The Washington Redskins have been a mediocre team for years, but this season looks particularly awful. An unimpressive Chicago Bears team just came into their stadium on Monday Night Football last week and blew them out. Quarterback Case Keenum threw three picks and got sacked four times during a terrible game.

It looked like the Giants might be equally terrible until recently. Finally, a past-his-prime Eli Manning has been benched for rookie Daniel Jones. While Jones may not be perfect, he has already been a breath of fresh air in New York.

While the Giants gained a new star, they simultaneously lost a key piece of their team. Running back Saquon Barkley has a high ankle sprain and consequently will miss four to eight weeks. Last week, the top two rushers were Jones and receiver Sterling Shepard. Needless to say, they will look to find a better solution.

If the Giants passing game under Jones works as well as it did last week, resulting in two receivers with over 100 yards, a softer running game may not be a huge problem.

New York’s defense has been a bit of a mixed bag. The Giants secondary was a Jekyll and Hyde situation in Week 3, improving during the second half after giving up 28 points in the first two quarters. Overall, the secondary has been a weak spot for the G-Men.

On the other hand, the Giants pass rush finally got going, as Markus Golden recorded two sacks and four quarterback hits.

If there was ever a week to be figuring things out, it would be when you play the Redskins. In addition to Keenum’s terrible play, Washington’s running game combined for a mere 69 yards.

While the linebackers played fine in Week 3, dumb mistakes in the secondary and soft play up front nullified any progress the unit was making. This defense is still one of the league’s worst.

The Giants aren’t perfect and they may not be a playoff team, but they have the potential to be exciting with Daniel Jones at the helm. To sum up, this is the week to figure out how to move forward.

If Jones is who the Giants hope he is, the Giants should dominate the Redskins.

There are a number of options for watching Giants vs. Redskins on streaming platforms that carry FOX. However, consult a coverage map to see what game your regional channel will be playing.

Wayne Gallman, Running Back: With Saquon Barkley out for four to eight weeks, Gallman looks to be the next man up. He didn’t exactly flash last week, but he will get a chance to be the number one rushing option going forward. In short, Gallman is a top flex option at the very least.

Terry McLaurin, Wide Receiver: Averaging 70 yards and a touchdown through three weeks, McLaurin is quickly becoming a solid WR2 consideration. The third-rounder is showing a lot of potential despite the team’s other struggles.

New York Giants vs. Washington Redskins: Why it matters

For both teams, this game is about the future.

In New York, the future is already here. Daniel Jones is going to be the man going forward for the Giants, and so far, that isn’t a bad thing.

The Redskins’ future hasn’t quite arrived yet. Case Keenum is, at best, a journeyman, and while has excelled in some stops of his career, Washington’s supporting cast is not doing him any favors. Redskins fans are surely counting down the days until first-round pick Dwayne Haskins gets to start. If the quarterback is a bust, at least fans will know things aren’t getting better anytime soon.

Even if the Giants miss the playoffs, the rest of the season will be about learning how to support Jones and get better for the future. This Redskins organization looks lost, and games like this are important insofar as they give us a hint of how long the team might be in the wilderness.