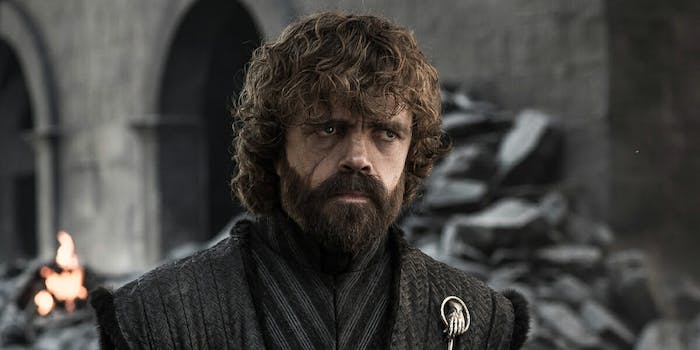 How to watch ‘Game of Thrones’ season 8, episode 6 for free

We’re at the end of an era for Game of Thrones. Season 8, episode 6 is the series finale for HBO’s beloved show, and no matter your opinion on how the saga panned out, it’s hard not to be sad it’s over. (Unless you’re our resident Game of Thrones expert Michelle Jaworski, who deserves a vacation right now.)

At this point, there’s one main question to answer, aside from, “WTF?” Who will come out on top at the end and sit on the Iron Throne? If there’s even a throne left, that is. As Ramsay Bolton warned us in season 3, “If you think this has a happy ending, you haven’t been paying attention.”

George R.R. Martin himself has repeatedly described the ending of the book series A Song of Ice and Fire as bittersweet. The show adaptation has been described with the same exact sentiment several times by actors—including Peter Dinklage and Liam Cunningham, who have beaten the odds and made it to the finale.

Here’s everything you need to watch Game of Thrones season 8, episode 6 for free.

Game of Thrones season 8, episode 6 is available exclusively on HBO.

When does Game of Thrones season 8, episode 6 air?

The series finale is the last of six episodes scheduled for season 8, which have ranged in length from 54 minutes to a whopping 82 minutes. This week’s episode will be 79 minutes long.

How to watch Game of Thrones season 8, episode 6 for free

Game of Thrones is no stranger to the horrors of war or what it brings to everyone caught in the line of fire. We’ve seen it time and again on the Blackwater Bay, at Castle Black, at Hardhome and beyond the Wall, at sea, on a field of fire, and in Winterfell with two entirely different backdrops. But the wrath and ruin that Daenerys Targaryen brought to King’s Landing after her victory against Cersei Lannister took that to another level, bringing fire and blood not only to her enemies, but to thousands of the people that she swore to save in an episode that shocked, stunned, and ultimately left viewers feeling cold. —Michelle Jaworski