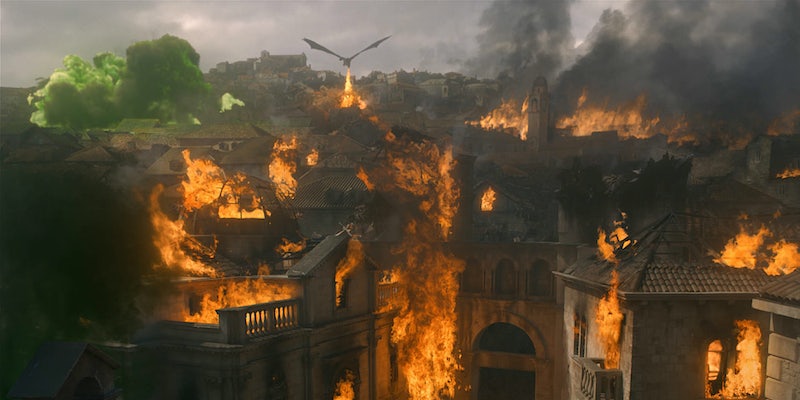 That green fire from ‘Game of Thrones,’ explained

The flame has a long and proud history in King's Landing.

The youthful dragon queen unleashed devastating dragonfire on a city full of innocents in the most recent episode of HBO’s epic series. The shocking display of savage power from a beloved character got fans talking, but many conversations were focused around the sudden reappearance of that strange green flame we may or may not remember. It’s flammable liquid, called wildfire, and for anyone who’s forgotten the other times that this show has been drenched in flaming emerald death, here is a refresher on where the green fire comes from.

The young Targaryen has been cracking since the outset of season 8. Between the deaths of Ser Jorah, Missande, and her dragon Rhaegal, Westeros has been rough for Daenerys. With everything she’s been through, many fans are unsurprised that she finally reached her breaking point. Still, when the bells rang to indicate King’s Landing’s surrender, many viewers hoped Dany would cease the siege. No such luck.

Dany’s true destruction didn’t begin until the bells of surrender rang out. Devastated, broken, and angry, Dany rained fire upon the innocent citizens of the city she hopes to rule. As buildings crumbled and bodies burned, bursts of green flame began erupting from streets and homes. It claimed its share of lives, though many of the buildings it took down were already in the process of crumbling.

The angry green fire certainly didn’t start the job of destroying King’s Landing, but it helped finish it.

We were first introduced to the idea of reproduced dragonfire early in Game of Thrones. Abundant stories exist surrounding the Mad King Aerys, Dany’s father, and his fall at the hands of the Kingslayer Jaime Lannister. The Mad King was intent on burning the citizens of his capital with caches of wildfire he’d stashed all over the city. Large quantities of the deadly fire were stored under the Red Keep, homes in Flea Bottom and throughout the city, and under the Great Sept.

Aerys intended to use the wildfire on his own people. Facing defeat at the hands of Robert Baratheon and his troops, the Mad King attempted to burn the entire city to the ground. Though he knew the innocents of King’s Landing would perish, Aerys thought that he would be transformed into a dragon in the flames. Thanks to Jaime’s “betrayal,” the people of Westeros’ capital never saw if he was right.

Long after the Mad King and his pyromancers were dead and gone, the dangerous weapon they created lingered underneath King’s Landing. Tyrion discovered its presence when he was hand of the king, after speaking with the castle’s pyromancer. After accurately noting that “the contents of this room could lay King’s Landing low,” Tyrion commanded the pyromancer to continue producing the deadly green substance for him.

The youngest Lannister child then unleashed the hard work of his pyromancers on Stannis Baratheon’s fleet at the Battle of Blackwater. It was the first time we saw its devastating potential, as it lay waste to a fleet large enough to take the capital.

The Great Sept of Baelor

Perhaps the most devastating display of wildfire’s destructive capability was exhibited when Cersei destroyed the Great Sept of Baelor. After engaging in a power struggle with the High Sparrow, Cersei decisively knocked out most of her enemies in one fell swoop. Employing the use of the “little birds” once on Varys’ payroll, she set an entire chunk of her city aflame.

Wildfire has hardly seen a mention since Cersei’s frightening display of savagery. All those scattered caches of the deadly substance never went away, however. They were still scattered throughout the bowels of King’s Landing, a powder keg waiting to be blown.

A blow they did. When Daenerys unleashed Drogon on the streets of the capital during Sunday night’s penultimate episode, his torrential flame awoke the sleeping danger beneath the city. As if dragonfire wasn’t enough, the citizens of King’s Landing burned in green when their city fell.