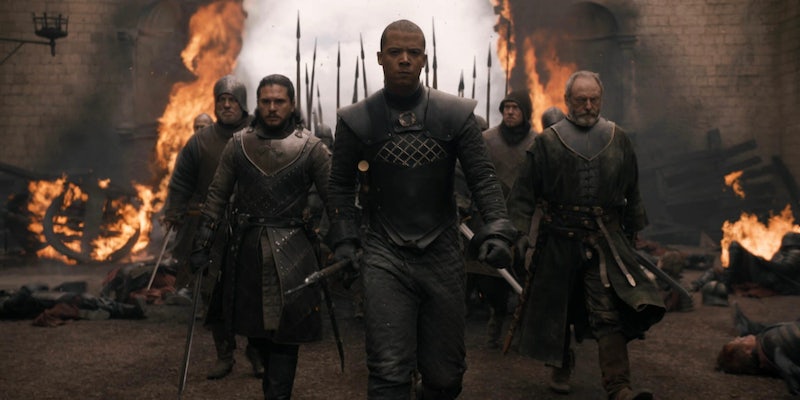 The most divisive episode of TV in recent memory was a lot to handle.

Warning: This article contains spoilers for the most recent Game of Thrones episode, “The Bells.”

Game of Thrones is no stranger to the horrors of war or what it brings to everyone caught in the line of fire. We’ve seen it time and again on the Blackwater Bay, at Castle Black, at Hardhome and beyond the Wall, at sea, on a field of fire, and in Winterfell with two entirely different backdrops. But the wrath and ruin that Daenerys Targaryen brought to King’s Landing after her victory against Cersei Lannister took that to another level, bringing fire and blood not only to her enemies, but to thousands of the people that she swore to save in an episode that shocked, stunned, and ultimately left viewers feeling cold.

As we reach the penultimate episode of Game of Thrones, we’re left to wonder just how much of what we’re seeing—whether it’s in the actions, the deeds, misdeeds, the end results, and the revealing of characters’ fates—will end up in George R.R. Martin’s A Song of Ice and Fire. For now, we’ll mostly have to keep speculating, but much of what we’re left with will surely leave us feeling uneasy.

Some of the characters who met their ends have been with us from the beginning. Some acted in ways we’ve never seen. Others watched in complete horror. We got all of that, thanks in large part to Miguel Sapochnik’s masterful direction, in painstaking detail.

If you wanted to see Dany burn King’s Landing to the ground, seeing all of those bodies burn might leave you feeling otherwise. A girl who’s become so accustomed to war has finally had enough of it. And even among the unscathed, you see some characters start to question the depths of their own loyalty.

One of the biggest complaints out of “The Long Night” was how few characters of consequence actually died in it. Sure, a lot of characters died, but as for the who, critics wanted to see main characters, or even more important characters, die than Theon Greyjoy and Ser Jorah Mormont. We finally saw some major players fall in “The Bells,” but the execution of those ends will surely leave fans torn.

Varys has consistently been one of the best players of the game, but by the time he met his bitter end, one promised to him last season, his power had long since diminished. Having learned of Jon Snow’s parentage, he starts to make moves to put Jon on the Iron Throne despite Jon not wanting it. He’s then sold out by Tyrion and sentenced to die by dragonfire. Sure, he knew what was coming, but it wasn’t particularly satisfying.

Nor was Cersei and Jaime Lannister’s end. Sure, Jaime may have gotten his wish to die in the arms of the woman he loved as he and Cersei were crushed by rubble, but for him to get there, it involved Jaime—who destroyed his reputation for killing the Mad King to save the Seven Kingdoms—telling Cersei that he never really cared for the people of King’s Landing and that it was always them and their unborn child. Cersei, who’s had very little to do this season, goes out not with the kind of roar she’s excelled at for eight seasons even as we’ve cursed her actions, but with a whimper. And Jaime wouldn’t have died in King’s Landing if he weren’t first freed by Tyrion in the first place.

Others were more fitting. Harry Strickland, the leader of the Golden Company, turned out to be entirely inconsequential and was taken out with little thought by Grey Worm. Euron Greyjoy, who started the show killing a ruler and taking a job from a more qualified candidate, died with the belief that he accomplished more than he actually did. Qyburn died at the hands of his own creation.

And then there’s Cleganebowl, the overhyped fight between the Mountain and the Hound. With King’s Landing burning in the backdrop, it seemed kind of silly to have these two large men fight each other like they were in a bad action movie; for much of the fight (which seemed to get more screentime than Jaime and Cersei’s final moments), it played out that way. The only saving graces of that fight came from the Hound: both in his mercy in trying to spare Arya Stark from heading on the same path of destructive revenge he was on and in finally embracing what he feared most to take one of Westeros’ most brutal men out of the picture.

Queen of the Ashes

“They say every time a Targaryen is born, the gods toss a coin and the world holds its breath,” Varys tells Jon early in “The Bells.” It’s a sentiment that Cersei mentioned way back in season 2; it’s apparently a Westerosi saying. After this episode, there’s very little doubt as to what Dany’s coin reveals, leading to some of the episode’s biggest outrage.

Dany easily took out Euron’s fleet, and the Unsullied and Dothraki forces took care of the Golden Company. It was once those forces breached the city that things came to a standstill: Jon, Davos Seaworth, and Grey Worm were at the front and watched the Lannister army throw down their swords in surrender. Then, the bells rang. Grey Worm threw his spear at a soldier, which launched the sacking of King’s Landing. And then Dany caught sight of the Red Keep after she won and decided to burn it all anyway.

Dany going full-on Mad Queen has been a possibility on Game of Thrones for years. We’ve seen instances of Dany wanting to burn everything to the ground but being persuaded to take a different action by her advisers. She’s burned the slavemasters of Astapor, all of the Dothraki khals in Vaes Dothrak, set her dragons onto Meereen, took Drogon out onto the battlefield, and executed Randyll and Dickon Tarly by dragonfire. Even amid the good that her dragons have done beyond the Wall and at Winterfell, her advisers still feared her going down her father’s path. In the end, she chose fear over love; she became a dragon after all.

By the time that Dany burns King’s Landing to the ground in “The Bells,” she’s lost almost everything and everyone who she cared about, and she believes that Jon, Varys, and Tyrion all betrayed her. There are hints both in ASOIAF and in Game of Thrones that suggest this is how Dany’s plan to free the people of Westeros and rule over them as their new queen plays out. (If anything from this episode feels Martin-esque, it’s Dany’s tragedy.)

Yet, something feels off about it. For some, it feels like a betrayal of her character. Others might be able to understand how Mad Queen Daenerys came to be but feel that the reveal was unearned or rushed—a result of the show barrelling toward its end as a result of restrictions the show seems to have given itself.

On watching the horrors of the battle from the ground

Once Dany takes flight, we only really see her from a distance for the rest of the episode, which leaves us with a handful of viewpoint characters. On one hand, we have Cleganebowl and Jaime and Cersei’s reunion. On the other, we’re left with Arya, Jon, and Tyrion, who all watch the sacking of the city unfold.

Tyrion and Jon are both horrified at what the queen they’ve sworn to serve was capable of doing. At one point, Jon stops one of his own soldiers from raping a young woman, which both reminds us that Jon is one of the better ones—a level-headed person who’s willing to kill other soldiers, especially those who attack him first, but who stops at violence women and children.

It’s a stark contrast to Dany’s fire-fueled rage that feels even more on the nose than Tyrion and Varys’ conversation about likability last week. It’s also tiring that the show felt like it had to depict that kind of scene one last time this late in the game; despite arguments that it’s something that did happen in real-life wars, it feels unnecessary in an episode featuring thousands of burning women and children.

And then there’s Arya. She was initially hellbent on killing Cersei—until the Hound tries to get her to leave King’s Landing, which echoes a similar conversation he had with Sansa in season 2. You might question how willing Arya would actually be to abandon her quest to finish her kill list at the very end, but once she does, the show’s choice to focus on Arya is incredibly effective, providing some of the episode’s more harrowing sequences. At times, it was almost too tough and too gruesome to watch.

She’s the woman to soothe other women and children who are cowering in fear and struggling not to be run down by a stampede of soldiers and civilians trying to get away from the flames. It doesn’t matter that Arya just killed the Night King just a couple episodes ago and Dany called her a hero for it; Arya could just as easily burn to a crisp along with everyone else. For once, one of Game of Thrones’ embodiments of Death is choosing to live; even a pale mare seems tempting. She’s battered and broken, but she lived to see another day.

Despite Arya riding off into the distance, something tells us her story isn’t quite over yet. She seems to still be in King’s Landing in the series finale, and if Melisandre’s message proves true once again, she might still have some eyes to close.