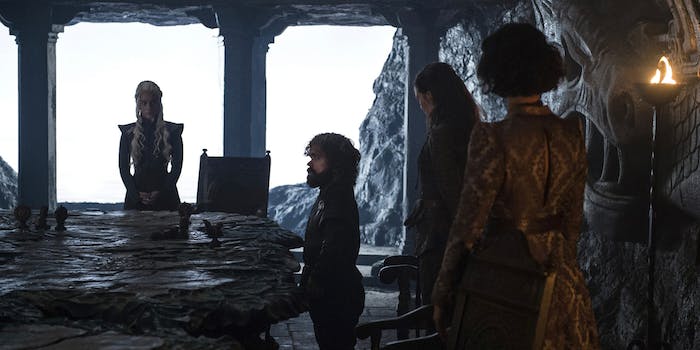 The body count is starting to grow.

Warning: This article contains spoilers from the latest episode of Game of Thrones, “Stormborn.”

We’re only two episodes into Game of Thrones season 7, and the war for Westeros has begun.

In an episode full of reunions, tenderness, and one very gross cutaway, “Stormborn” was already packed to the brim with moments to analyze. But with the end of the show soon approaching, Game of Thrones has switched into high gear—and Euron Greyjoy didn’t wait until Dorne and the Ironborn loyal to Yara Greyjoy were ready to strike.

By the end of the dark and bloody sequence, we have a man overboard, multiple captives, and two major deaths, along with the countless (and nameless) men and women who lost their lives at sea. None of it is good for Daenerys Targaryen, who planned to use the armies of Westeros loyal to her to surround King’s Landing. Instead, she has suffered her first major loss since she took over Slaver’s Bay.

Who’s dead, who’s alive, and who’s now a prisoner? Let us get you up to speed.

Euron Greyjoy: Alive, on his way to King’s Landing with a gift.

Obara Sand: Dead, stabbed with her own spear by Euron Greyjoy.

Nymeria Sand: Dead, strangled with her own whip by Euron Greyjoy.

Yara Greyjoy: Either dead or taken captive by Euron Greyjoy.

Theon Greyjoy: Alive, abandoned ship after failing to save Yara from Euron

Now that we know where everyone is, let’s take a close look at how it all went down.

In the season 7 premiere, Euron promised not to return to King’s Landing until he had a “priceless gift” for Queen Cersei Lannister. And he may have just gotten it.

The Greyjoys thrive at sea, and Euron is no exception to that rule. He called himself “the storm… the first storm and the last” in season 6 before murdering his older brother and has no qualms about kinslaying. He also had the advantage on Yara as he surprised her, the Ironborn, and the Dornish fleet on their way to Sunspear. He revels in the violence and chaos of it all—especially after killing two of the Sand Snakes with their own weapons.

First he spears Obara Sand with her spear (the same weapon of choice that her father, Oberyn Martell, used). Nymeria Sand, having just seen Obara’s death, tries to attack Euron with her whip, which he uses to strangle her. And then he gets the best of Yara with Theon powerless to stop him.

Euron nabbed the first victory for Cersei Lannister in the War of the Two Queens, and he’s already a hero in King’s Landing if the preview for next week’s episode is any indication.

The bigger question remains: How will Cersei receive his gifts?

Is Dorne no more?

The Dornish plot has been a thorn in Game of Thrones’ side for two seasons now. First shoehorned in during season 5, it was met with scorn by both book and show fans alike. The major fight scene in Sunspear, too, was widely criticized. In season 6, the Dornish players—Ellaria Sand and the Sand Snakes—were largely absent, only appearing in two scenes while Doran and Trystane Martell were wiped out during the season 6 premiere.

But now, just as they became essential to the plot, they’re nearly decimated. The Sand Snakes continued to bicker, but then they’re separated, captured, and killed. Tyene had debated whether to kill her two sisters before reaching King’s Landing for making fun of her, but now she won’t get the chance. Her sisters are dead, and she’s heading to King’s Landing as a prisoner.

Obara and Nymeria Sand were wiped out in rather cruel fashion. Euron took great pleasure in killing them with their own weapons in a gory, drawn-out fashion. Tyene, who stood by her mother Ellaria, was captured by Ironborn after Tyene took down many of them herself with her knife.

Ellaria and Tyene survived, but it’s safe to say they won’t be around much longer. As Tyrion reminded us in Dragonstone, Ellaria is responsible for murdering Myrcella Baratheon. Tyene is the only Sand Snake who’s actually Ellaria’s daughter. Cersei can make Ellaria watch Tyene die so she knows a mother’s pain, or she can get revenge on Ellaria herself.

Theon Greyjoy is a capable fighter and Yara deemed him her advisor and protector, but when face-to-face with Euron holding Yara captive, he jumps overboard.

Although he hasn’t been held captive by Ramsay Bolton for more than a season, he’s still severely traumatized by what happened to him. Euron attempts to goad him and calls him a “cockless coward, but with his taunting uncle and echoes of death and mutilation around him, Theon’s triggered into fight or flight. He jumps into the water.

While some fans might criticize Theon for his perceived cowardice when faced with saving his own sister, his other move would’ve been just as bad. Fighting would get both of them killed: Euron almost would’ve surely killed Yara outright if Theon charged at him and probably killed him too. As far as we know Yara is still alive (though some fans believe she’s the woman hanging from the ship at the very end of the episode). But Yara could also be included in Euron’s gift.

Theon—so far the only known survivor of Euron’s assault at sea—still has a part to play. He’s alive to tell the tale and is able to return to Dragonstone and tell Daenerys what took place that night. And Daenerys won’t take too kindly to the destruction of her fleet and capture of her supporters.