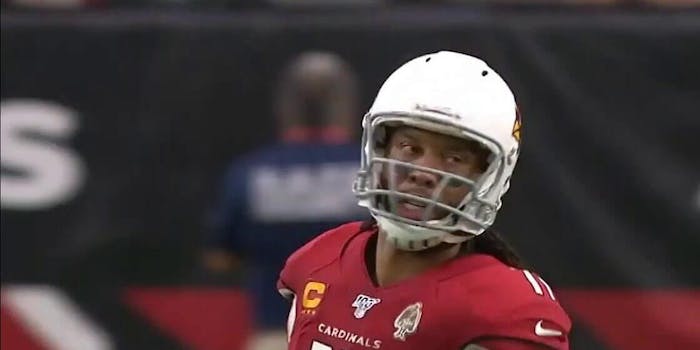 How to stream Cardinals vs. Giants in Week 7

Two promising rookie QBs clash in a battle for the future.

These are two of the most interesting bad teams in football. It is hard to imagine either of them going to the playoffs, but the Arizona Cardinals and the New York Giants have both had exciting moments this season. This is largely because we are getting a look at the first two quarterbacks selected in the 2019 draft, Kyler Murray and Daniel Jones.

These rookies haven’t been good enough to buoy their teams to Super Bowl runs in year one, but each signal caller has shown promise, reinvigorating beleaguered fan bases.

The Cardinals got their second win of the season last week. Yes, these two victories have come against the awful Falcons and Bengals, but there is still cause for optimism in Arizona.

Arizona’s offense is starting to click. Murray is learning to make the most of David Johnson, who tends to top the Cardinals offense in the rushing and passing columns. The ageless Larry Fitzgerald has added nice contributions, providing another option for his rookie signal caller.

Unfortunately, however, the Cardinals defense is terrible. The biggest problem is that this team allows opponents to gobble up yards. Opponents have averaged 132.8 yards rushing and 281.2 yards passing against Arizona. They have even allowed 600 yards to tight ends.

With Jones at quarterback, the Giants have lost to good teams and beaten bad teams—sort of what you would expect from a talented but developing rookie QB. Golden Tate and Darius Slayton look like a nice set of receivers, and when Saquon Barkley is healthy, this offense could really be dangerous.

The Giants aren’t the worst team on defense, but it is not a strength either. While New York’s front seven performs well consistently, their secondary often squanders the goodwill built up in their defensive front. This talent-poor unit is doing decently well with what they have, but that likely won’t be good enough a lot of weeks.

This game is a toss-up. The terrible Arizona defense could give the game away, but the Giants have had their problems in that department, as well. If Barkley actually comes back this week and looks good, you might give the edge to the G-Men. If Johnson is the only real running back on the field, then maybe the Cardinals have the slight edge.

We’ll stay away from any firm calls here. Expect a close one that could go either way.

There are a number of options for watching Cardinals vs. Giants on streaming platforms that carry FOX. However, consult a coverage map to see what game your regional channel will be playing.

Larry Fitzgerald, wide receiver: Against good defenses, it is hard to start anyone but David Johnson. Against this bad unit, the wily veteran could be worthy of a flex in some leagues.

Golden Tate, wide receiver: It took Tate a week to get back in the swing of things after a four-game suspension, but he went off last week. If Sterling Shepard doesn’t clear concussion protocol and Saquon Barkley isn’t in top form, the offense could run through Tate.

Arizona Cardinals vs. New York Giants: Why it matters

This game is a look at the future. While it doesn’t necessarily have any implications for this year’s playoff picture, it will be interesting to see which rookie QB is looking better as they go head-to-head.

The NFC is an incredibly competitive conference, and even ardent fans would have to squint to see these teams making a wild-card run. However, this could be one of the most fun games of the week to watch as we see two teams develop for the future.

It’s hard to call who will come out on top here, and with key injuries putting a number of Giants starters in doubt, we will stay away from any firm predictions.

Look for a competitive game that could go either way.