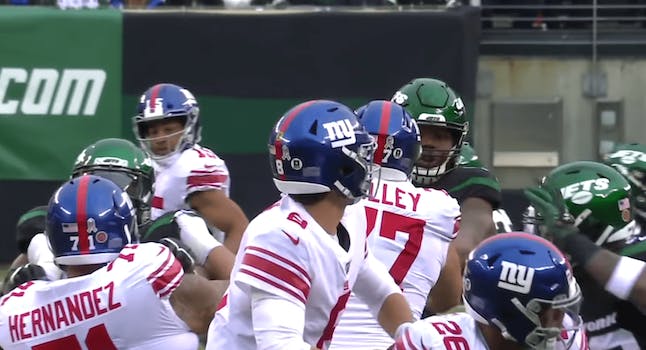 How to stream Bears vs. Giants live

Two of the NFL's weakest teams face off as both squads look towards the future.

These two teams are going nowhere fast. The Chicago Bears and the New York Giants have had bad seasons by any measure. Both teams sit near the bottom of their divisions. Both teams are certain to miss the playoffs. And both teams will enter the offseason with a lot of unanswered questions.

The positive for the Bears has been its defense. Despite fielding a helpless offense, Chicago still has the fifth-best defense by DVOA. If they can keep this unit together, maybe a better quarterback could lead them to better days.

In New York, there is an exciting young core of offensive talent. This hasn’t translated to many wins. At least Daniel Jones and Saquon Barkley give fans something to get excited about in watching a 2-8 team.

These are all considerations for tomorrow. Today, there isn’t much to appreciate about these teams. Unless you like displays of defensive dominance, this likely won’t be an exciting game. The only elite unit in this matchup is the Chicago defense, which should have their way with the young Giants offense. The only question is if Mitch Trubisky can score enough points to take advantage of the opportunities his defense hands him.

Here’s everything you need to know to live stream Bears vs. Giants, including what to watch for on the field.

There are a number of options for watching Bears vs. Giants on streaming platforms that carry FOX. However, consult a coverage map to see what game your regional channel will be playing.

Bears vs. Giants live stream: How to watch NFL online

Chicago Bears vs. New York Giants: Why it matters

It’s not clear if any team could win with Mitch Trubisky. The quarterback who was supposed to be the future in Chicago has quickly become an albatross around the neck of the franchise. Promising young running back David Montgomery has been hamstrung by defenses that don’t fear the pass. Talented receivers like Allen Robinson and Taylor Gabriel can’t succeed when sloppy throws are coming their way.

When the offense is totally ineffective, the defense can’t do it all. While this D is often holding teams under 20 points per game, it doesn’t matter if your team can’t score 20 points. The Bears coaches seem to be leaning towards benching Trubisky in favor of middling backup Chase Daniel, and while that likely won’t fix things this year, at least they won’t spend another season trying to make Mitch happen.

Chicago should be happy with its top-tier defense. Core players like Khalil Mack, Nick Williams, and Leonard Floyd could form a nucleus of a better team with a better offense in the years to come.

With the 27th ranked offense and the 27th ranked defense, the Giants aren’t good on either side of the ball. Even so, there are pieces on this offense that could prove exciting if the rest of the roster improves. Whoever is coaching the Giants next year will be glad to have Daniel Jones, Saquon Barkley, Darius Slayton, and Golden Tate on the roster.

Jones deserves a particular mention, as he has had some good games lately. Against the Jets, he threw for 308 yards, four touchdowns, and no interceptions. He has his bad weeks, but there is real potential in Danny Dimes’ game. And he’s done all of this behind a bad offensive line.

The defense has a couple of bright spots, such as the emergence of Markus Golden and the continued excellence of safeties Antoine Bethea and Jabrill Peppers. But, overall, they don’t even have a core to build around on this aging D.

This is a hard game to predict. The only good unit here is the Chicago defense, so you have to give the edge to the Bears. However, the Chicago offense might not be able to do anything, whether it’s Trubisky or Daniel under center. Neither Bears quarterback has impressed this season, whereas Jones has had good games.

Give the Bears the edge here, but don’t be surprised if the quarterbacking costs them another game.