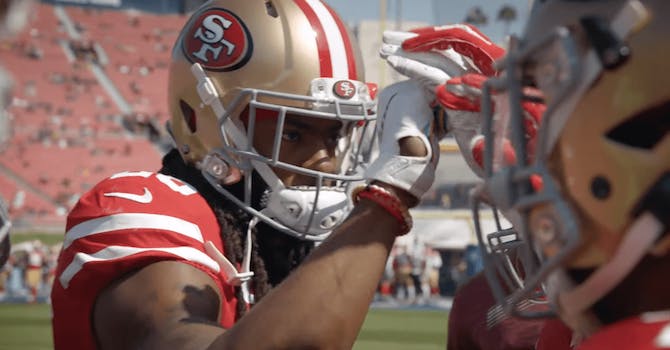 How to stream 49ers vs. Redskins in Week 7

Though the Redskins got their first win last week, this game should be all about the undefeated 49ers.

Just because the Washington Redskins aren’t the worst team in football doesn’t mean they are going to win another game this year—especially not against the San Francisco 49ers.

Credit where credit is due: The Redskins came away with their first win of the season last week. However, they also emphasized their weaknesses in victory. The game plan was to run an aging Adrian Peterson until the wheels fall off, and that only worked for a one-point victory over the league’s worst team.

Peterson likely won’t have the same success every week, but he did show he can still be productive against the right teams. Terry McLaurin, however, has been a bright spot at receiver all season. The rookie looks like a star.

The rest of the offense may be the league’s worst, and the revolving door of quarterbacks in D.C. has been thoroughly unimpressive week to week.

On the other hand, the defense hasn’t been quite as bad as the offense. Landon Collins, Jonathan Allen, and Jon Bostic played well last week. But the issue all season has been that the Skins have good individual players while the unit is so-so at best. Fundamental problems like time of possession, giving up a ton of third downs, and high completion rates from opposing QBs haunt a squad that should be better.

Now let’s talk about a defense that maybe couldn’t be better: the San Francisco 49ers. Defensive coordinator Robert Saleh is running a historically good unit right now in San Francisco. The secondary shuts down receivers. Linebackers Kwon Alexander and Fred Warner (who have dubbed themselves the “Hot Boyz”) are tackling machines.

The 49ers defensive line is the best in football. Last week, they finished with four sacks and six quarterback hits. This unit has been incredibly stingy with rushing touchdowns, first downs, and total yards.

But on offense, the team isn’t quite so perfect. Jimmy Garappolo is still developing as a QB. Jimmy G threw a bad pick on Sunday, and he is prone to an odd decision here and there. Tight end George Kittle remains the most consistent passing option on the team, and you would really like to see Jimmy G have a star receiver to help him stretch the field as he develops.

So far, however, a decent offense and an amazing defense has been a winning combination. While Jimmy G isn’t perfect, many in the NFL would trade “pretty good” for what they are putting on the field every week.

San Francisco should cruise here barring a catastrophe, though the offense could feel a little heat from a Skins defense that has its moments.

There are a number of options for watching 49ers vs. Redskins on streaming platforms that carry FOX. However, consult a coverage map to see what game your regional channel will be playing.

George Kittle, tight end: Kittle and running back Matt Breida remain the only reliable fantasy options on this team. Both of them should do well here, but don’t expect any other Niners to wow you this week.

Terry McLaurin, wide receiver: You should be skeptical of any Redskins this week. However, in particular, don’t expect a repeat performance from Adrian Peterson against a team that doesn’t allow rushing touchdowns. If anyone comes off well in this offense, it should be McLaurin.

San Francisco 49ers vs. Washington Redskins: Why it matters

It’s hard to say this game matters all that much because the outcome feels like a foregone conclusion.

But this matchup does matter in terms of coaching. If Redskins interim coach Bill Callahan wants a chance to stick around, he needs to show some kind of spark even in a loss. By contrast, 49ers defensive coordinator Robert Saleh is essentially using every game as a head coaching audition at this point.

This game won’t impact the standings much, but Redskins games going forward matter for players who may (or may not) want to stick around as the team rebuilds yet again.

The 49ers should extend their unbeaten streak fairly easily here in what may be the least competitive matchup of the week.