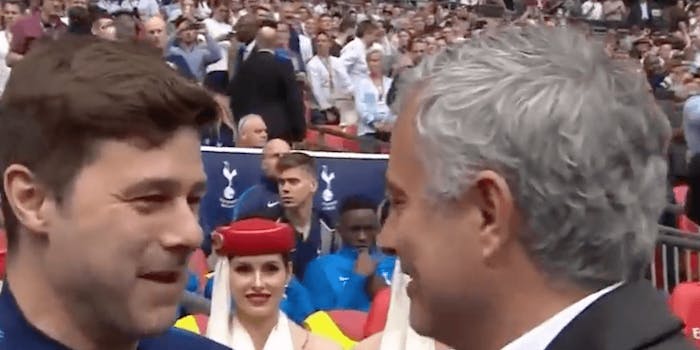 How to stream Manchester United vs. Tottenham Hotspur live

Jose Mourinho returns to his old stomping grounds as Spurs take on United.

Newly crowned Spurs manager Jose Mourinho makes his return to Old Trafford this week, after the Portuguese skipper was sacked by the Red Devils almost a full year ago. Mourinho’s replacement, Ole Gunnar Solskjaer, isn’t exactly safe in his job these days.

Both managers will clearly be motivated for victory, whether it’s to vindicate or ridicule the United brass.

Here’s everything you need to know to stream Man United vs. Spurs live.

Manchester United (Last 5 matches: WWDLW) is in its seventh season since club legend Sir Alex Ferguson stepped down. Solskjaer’s first full season season is the worst for United since the 1990s. United’s collective ex-husband is returning home for Christmas, and if the evening isn’t going well for the Old Trafford faithful, the kids will start to boo. Not all is lost though. United sits in 10th in the table; a win against Spurs could see the Red Devils rise as high as fifth. (They could use that morale boost.)

Tottenham Hotspur (Last 5 matches: WDWWW) has ripped off the Mauricio Pochettino band-aid. Though they found a manager seemingly antithetical to the club’s values, fans of Tottenham are starting to believe the sky is the limit. Jose Mourinho brings a prestige —and a history of trophies—that Spurs fans would have thought impossible five years ago. The even better news is that Spurs haven’t begun to play in the grinding style Mourinho likes. (But perhaps a revenge game against United would be the perfect time to start playing Jose-ball.)